So much more than your run-of-the-mill beach town, Nantucket is a way of life—both to those who live there and those who flock there as a summer rite of passage. You don’t have to look hard to see the Nantucket lifestyle’s influence just about everywhere, from beach-goers’ preppy madras to its storied homes’ perfectly-weathered-gray singles to its restaurants’ beautiful casual-chic interiors. Given how interconnected the island’s way of life is to style, we thought it only fitting to ask interior designers to give us the scoop on Nantucket’s most beloved spots. Ahead get these Nantucket-loving designers, Kevin Isbell’s, Audrey Sterk’s, and Tharon Anderson’s picks for where to dine, stay, and play while relaxing on this ultimate summer paradise. 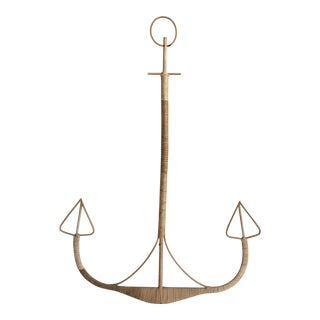 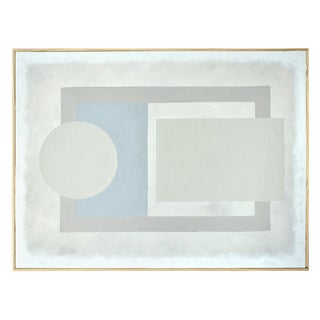 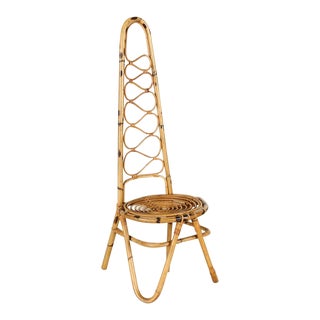 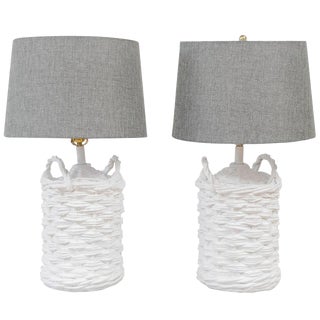 
SHOP THE ANTIQUING ON NANTUCKET COLLECTION >>

While Audrey is prone to tout Nantucket’s impressive cache of Airbnbs—“There are so many great places in town to try out different locations!”—for hotels, she (and Kevin) are fans of the Roman & Williams-decorated Greydon House. “They did a great job with the interior with a China Trade theme throughout,” says Audrey, who especially admires how the hotel seamlessly blends period details with new finishes and fixtures, not to mention the inventive cocktail list in the hotel’s onsite restaurant, Via Mare.

Like Audrey, Kevin is a fan of local lodgings, saying: “Befriend someone with a guest house!” when asked for his top picks (in fact, that’s his looker of guest house, above). In a pinch, however, Kevin’s not adverse to The Wauwinet, which he loves “for the historic charm.” No consolation prize by any means, this beachfront charmer (with the private beaches to prove it) first opened its doors in 1875 and has been revamped dozens of times since then (most recently in 2019). The breezy interiors are understated yet sophisticated, but it’s the bay-bumping back lawn that you’ll really want to steal away too, especially come golden hour.

Expert Travel Tip: Decide on your Nantucket vacay a beat too late and everything’s booked? “I always recommend visiting outside July and August,” says Tharon. “The summer months are very busy. September is really magical—the weather is great but it’s quieter and you can enjoy the beauty of the island with far less people.”

Where to Eat & Drink

Checking boxes in both the Instagram-worthy style departments and foodie departments is The Club Car. “We helped with their renovation, so this is a shameless plug,” jokes Tharon, who selected a bright sky blue palette for the restaurant’s banquets and chairs, and accented them with rustic exposed beams, brass statement lighting, and a jungle of greenery. The beachy-chic digs provide the perfect backdrop for a menu rife with Mediterranean influences. “The food is amazingly fresh and unexpected. It’s my favorite place to have lunch on a non-beach day,” says Tharon.

“I’m liking Dune on Broad Street a lot this season,” says Kevin of this fine dining establishment tucked into a once-private-residence Colonial. Multiple levels and rooms lend the restaurant a cozy, dinner party atmosphere, while an expansive menu caters to both surf and turf lovers alike. In a town known for favoring its pescatarians, Dune is also a hit for vegetarians, who swear by their signature beet salads.

“I love Island Kitchen Ice Cream Shop, they have amazing flavors and a great atmosphere!” says Audrey. Though it may have the low-lying profile of a locals-only hotspot, Island Kitchen Counter—the creamery counterpart to the beloved Island Kitchen restaurant—will make you feel like you’re a kid in your hometown again. With a 30-strong flavor line-up that includes all classics, plus a rotating roster of master-minded blends like snicker-pistachio and blueberry pie, Kitchen Island Counter is THE place to get your ice cream fix on the island.

A Nantucket institution, and for good reason, Millie’s Restaurant on Madaket Beach is where Kevin always heads for no-frills beach fair and unparalleled water views. As Kevin notes Millie’s is “perfectly perched to enjoy the famous Nantucket sunsets.” A fact which is no secret in town, so be prepared to wait it out a bit. On the plus side, your reward will be some of the Eastern Seaboard’s freshest fish tacos, period. Plus, biting strong cocktails served up in mason jars.

The new kid in town, The Gaslight, is both a music venue and Japanese-inspired Gastropub. “With music seven nights a week who could stay away? Plus, the delicious fried noodle bowls are to die for,” says Audrey, who’s a certified expert on the venue not only because her musician hubby’s been a regular since it opened, but because she worked alongside the architectural firm Emeritus to design the vintage-inspired digs. “It was a treat to transform this iconic space into a Jazz Club-esque atmosphere!” she says.

“For a post-beach cocktail” Tharon advises you head straight to Cisco Brewery. This Biergarten-style hideaway is a day-trippers’ (and drinkers’) paradise with an open picnic area surrounded by multiple bar fronts serving wines, beers, and mixed drinks (word on the street is that the frosé is legit). A line-up of food trucks and live music after 3 PM completes the party-all-day scene.

If there’s one set of marching orders that MUST be followed in Nantucket, it’s this: “Don’t miss the Lobster Roll at CRU!” says Tharon. An icon of a restaurant located at one of Nantucket’s tippy-most points, this waterfront restaurant could get by on its views alone, but dishes up rave-worthy seafood, anyway. As Tharon notes, it’s the lobster roll that shouldn’t be missed at CRU. Order one and you’ll score a buttery brioche bun piled high with claw meat and briny pickled onions. It’s one of the best riffs you’ll find just about anywhere, Nantucket or not.

“Nantucket Looms is a perennial favorite,” says Kevin of this 50-year Island fixture. Stop in for one of the shop’s signature hand-loomed blankets, wraps, or ponchos—many made on-site in the shop’s second-floor weaving studio—or come to browse their impressive collection of homewares and decor.

For a bohemian twist on Nantucket’s usual seersucker style, Audrey recommends heading to the boutique The Lovely. “It’s a great collection,” she says, of the shop’s casual-chic curation of maxis, kimonos, peasant tops in sophisticated, salt-kissed-feeling prints. “The owner Julie knows how to dress her customers to make them feel…well, lovely.”

There’s a thrill of the hunt element to Space Nantucket, an Old Wharf space run by Elise Gura, a chef-turned-florist-turned-textile-sourcer. “Elise finds the most amazing treasures from her travels, and curates the store so beautifully,” says Tharon, who routinely pops in to browse Space’s whimsical offerings. In addition to local artisan objects like cutting boards, candles, and handbags, the store also carries lines by bigger names like John Derian, Astier de Villate, and Livia Cetti.

Anyone hoping to literally tuck a Nantucket view in their suitcase will want to stop by Michael Gaillard Gallery before they go, a favorite of Tharon’s for art. A native of Nantucket, Michael’s panoramic photos of the island toe the line between representation and abstraction. Translated just a bit: they’re easy on the eyes, while packing a soul-stirring emotional depth.

Named for its founder, Erica Wilson (who some may know as the Julia Child of needle working and others as the wife of furniture maker Vladimir Kagan), Erica Wilson Nantucket is Tharon’s go-to “for clothing, and if you’re into it, fun needlepoint canvases,” she says. Anyone with a prep in their step will likely be smitten with the shop’s needlepoints featuring Nantucket landmarks, while those who take more of a no-shoes-no-shirt-no-problems approach to beach style will love the shop’s impressive collection of bohemian-inspired jewelry.

Owned and operated by Lynne Begier, a Boston-based Yogi who moved to Nantucket to realize her dream of owning a health-focused coffee shop, Roastd General Store is Audrey’s top pick for “a super cool vibe and a great cup of Joe.” In addition to serving up perfect caps, Roastd General Store also has a pantry full of top-shelf holistic goods. Swing by to stock up on Rishi tea, organic nut milks, herbs, Ayurvedic medicine, ghee, edible beauty products and more.

“It’s worth a trip out to ‘Sconset for breakfast sandwiches at Claudette’s and house peeping!” says Tharon of Nantucket’s easternmost enclave, ‘Sconset. Renowned for its rose-blanketed cottages, unmatched ocean views, and just-a-beat-slower pace, ‘Sconset is also one of Audrey’s recs as well. “Grab a cup of coffee and go as early as you can,” she advises. “The sunrise is amazing on the east end.”

“If it’s your first time on island, I would suggest the Whaling Museum in town,” says Kevin. “It will give you all of the details of the island’s rich history,” he adds. Even if museums don’t normally earn face-time on your itinerary, the uniqueness of the Whaling Museum makes it well worth an hour or two. In addition to a candle factory, the museum also showcases an impressive collection scrimshaws and whale skeletons. For those seeking the perfect ‘gram, you won’t want to leave without hoofing it up to the rooftop, either.

Both Kevin and Tharon are fans of Steps Beach. This south-side-of-the-island beach caters to Nantucket’s more committal beach goers thanks to a massive set of stairs leading down to the sand. Among the reasons Tharon adores this particular beach is its “kid-friendly swimming,” she says. Kevin, on the other hand, loves pairing a trip to it with a sandwich from nearby “Something Natural and a bike ride” for the quintessential Nantucket afternoon.

“We love to get Millie’s take-out for dinner and drive out to Eel Point and surf cast for stripers in the evening,” says Tharon of this remote strip of beach located at the northwest corner of the island. Named for the eels drawn in by the beach’s surplus of seagrass, Eel Point offers up saltwater lagoons (read: calm and shallow waters), plenty of shorebird watching, and five-star beach combing.

Should you need a break from the beach life, Audrey recommends heading to the Middle Moors. “In spring I love walking the Moors and listening to the Peepers,” she says. Owned by the Nantucket Conservation Foundation, the Middle Moors offers up 4,000 acres of undeveloped land prime for exploring. Expect dense wetland and woodland-like terrain dotted with cranberry bogs and ponds. Middle Moors is also the location of Nantucket’s elusive hills. Check out Altar Rock, which is a favorite local look-out.

“I love to meander along the streets on the outskirts of town,” says Tharon. “There is so much history and interesting architectural detail to take in. Be sure to walk past the old Pacific National Bank and up Main Street to the Three Bricks and surrounding houses.” 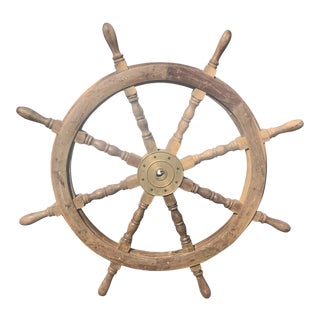 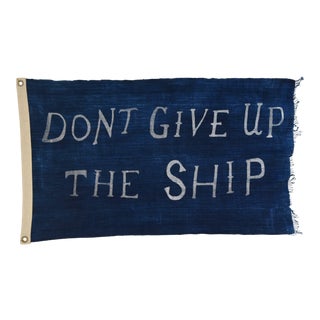 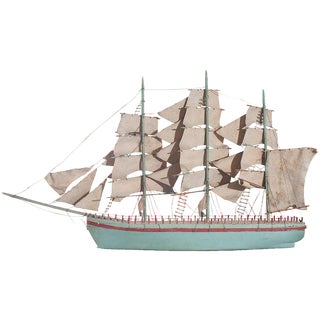 
Discover the Antiquing on Nantucket Collection >> 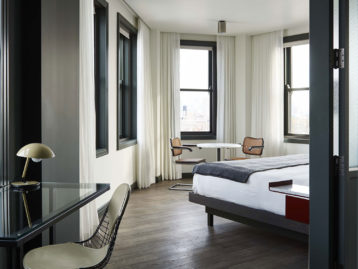 The Store That Vintage Dreams Are Made O...

Nestled within Brooklyn’s Boerum Hill, on a strip of Atlantic Avenue... Read More 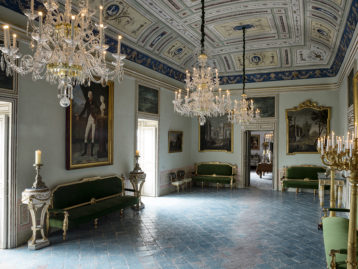 6 Historic Homes Worth Traveling To See

The world may be obsessed with what’s new and what’s next, but the... Read More 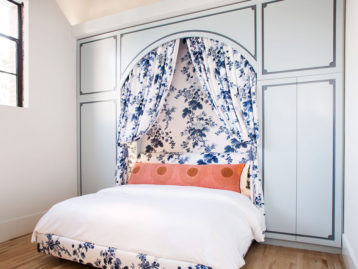 Whether you're looking for a spot to host the fam during the holidays... Read More 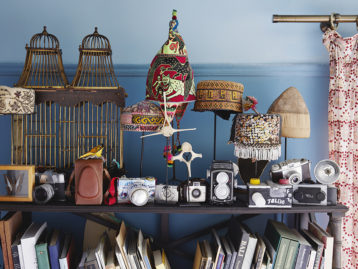 This Is How To Use Travel Finds At Home

For Caitlin Flemming, the designer and founder of the blog Sacramento... Read More 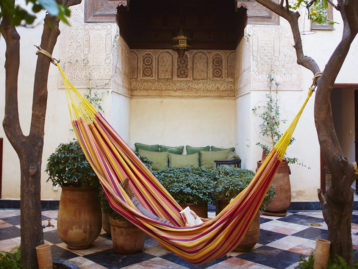 Whether you’re planning your next group trip, beach getaway, or a... Read More