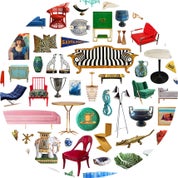 Click follow me to be notified about new products from this shop. You are now following Sophie Lou Jacobsen

Sophie Lou Jacobsen is a product designer whose work focuses on enhancing the enjoyment of everyday objects. Using design as a tool for analyzing modern rituals, she aims to alter perspectives and ultimately mood through her work. After having spent the first 10 years of design trajectory between London and Paris, Sophie is now based in New York City, and designs objects, graphics, and spaces. In August 2019, she launched her first collection of homeware goods.

In 2018, she co-founded Studio Sayso, a design firm which focuses on accessible furniture, alongside Sarita Posada. She also works on graphic design and creative direction under the name Our Studio, alongside Adrian Harwood. She was previously a designer at Ladies & Gentlemen Studio.