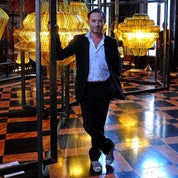 Click follow me to be notified about new products from this shop. You are now following Jacopo Foggini

Jacopo Foggini was born in Turin and currently lives and works in Milan. He explores art and design crossing the boundaries imposed by the conventions of those disciplines. Jacopo joins really early the family business where he discovers the versatility of the methacrylate, an industrial material normally used in automotive design. His first experimentation with this material date back to the beginning of the nineties, when he starts using a machine of his own invention that heats the methacrylate up to 200 degrees Celsius, producing a filament that he models with his hands to create luminous shapes, monumental works and mazes of threads in an elegant intertwining of colors. Jacopo's first solo exhibition was held in 1997 inside the space of his long time friend Romeo Gigli, and since then he's exhibited in more then sixty galleries and venues throughout the world. For years he has participated to the Milan International Furniture Fair, realizing striking site specific installations (Devotion in 2005, Aurora Borealis in 2007, Ofigea in 2008, Golden Fleece in 2010, sYmbols and Flysch in 2012, and more). Jacopo’s work includes other important installations in renewed hotels, restaurants, showrooms and theaters, in addition to the site specific projects for private residences and collectors around the world.