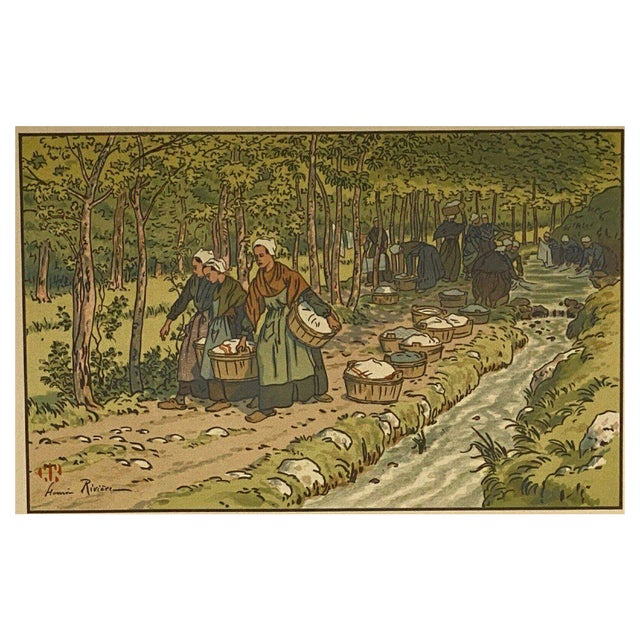 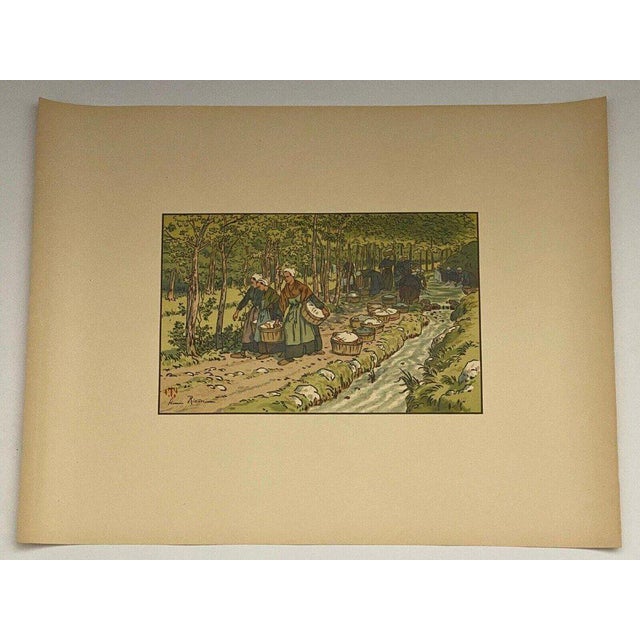 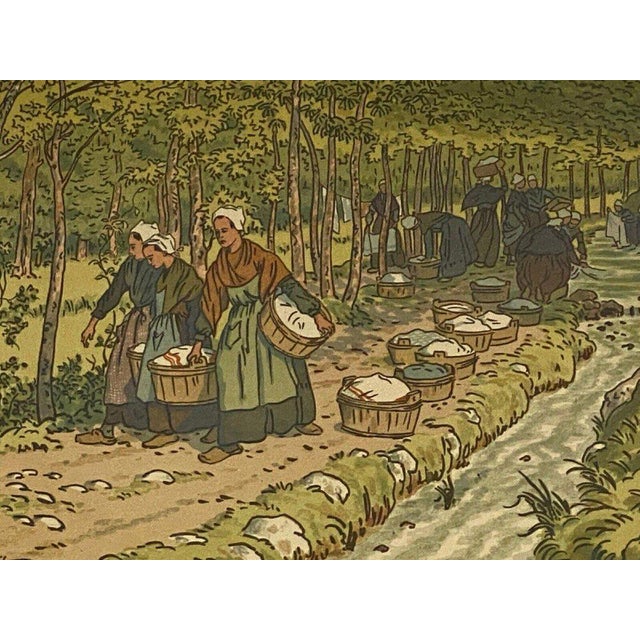 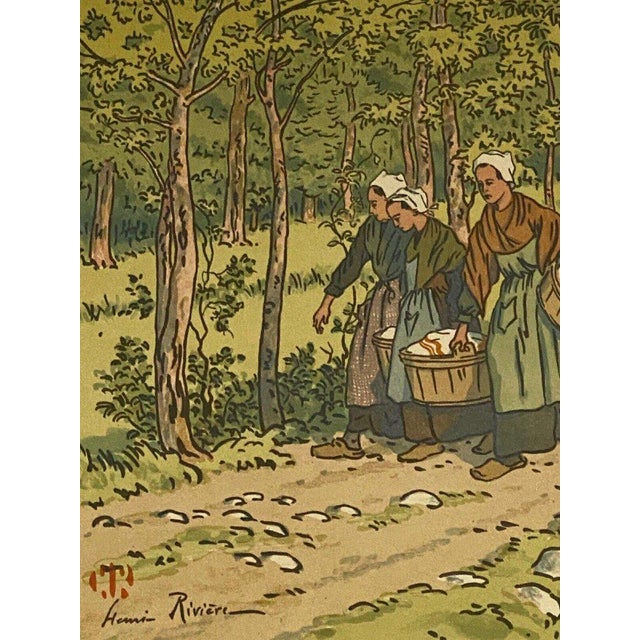 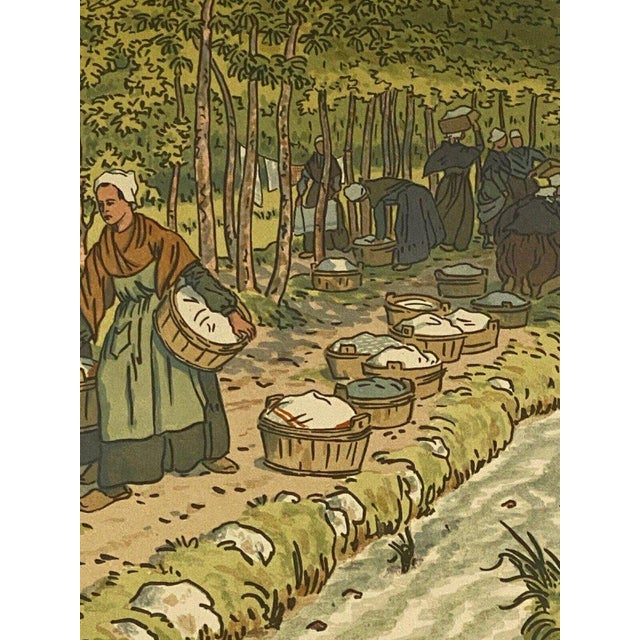 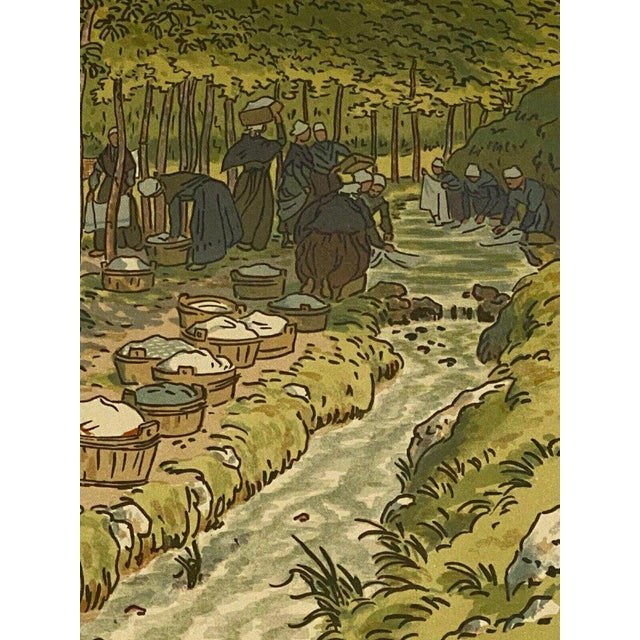 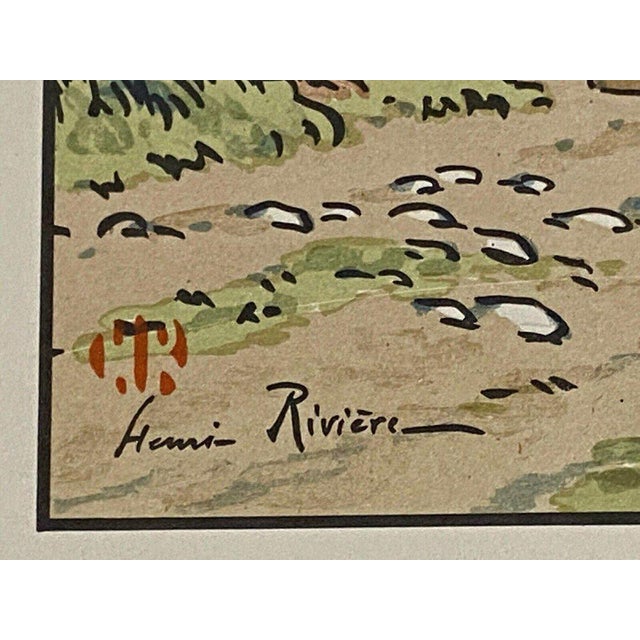 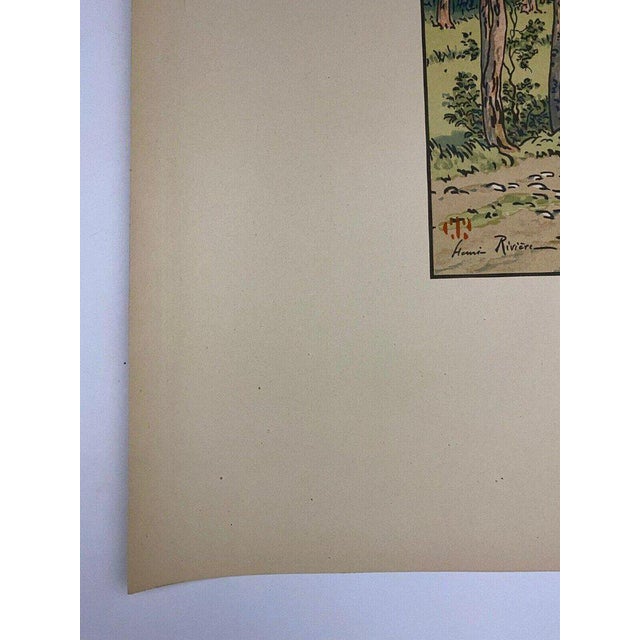 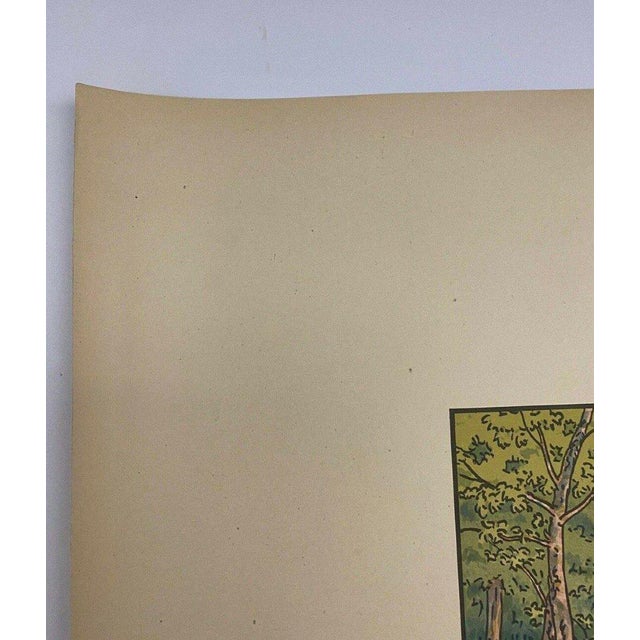 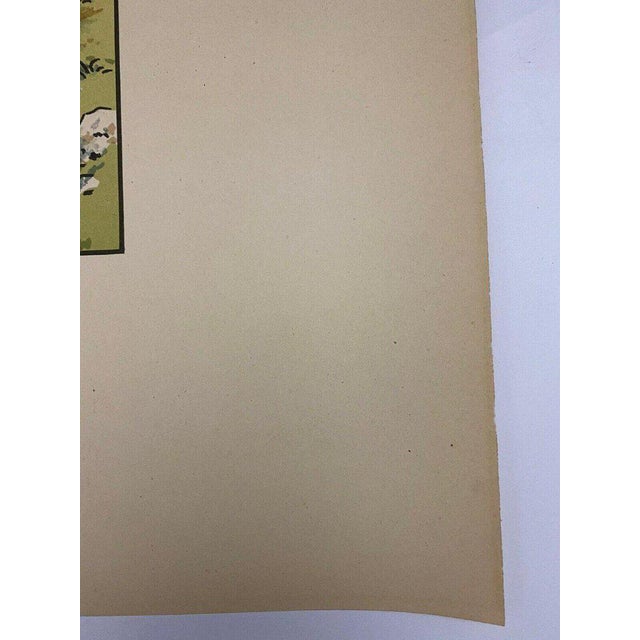 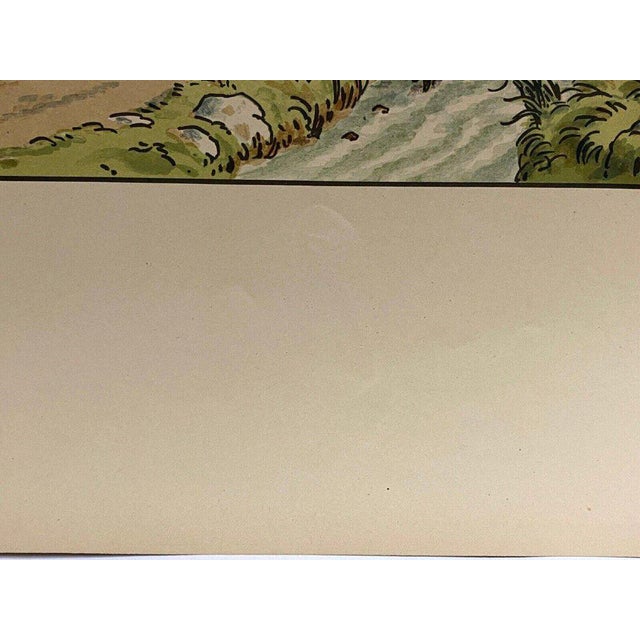 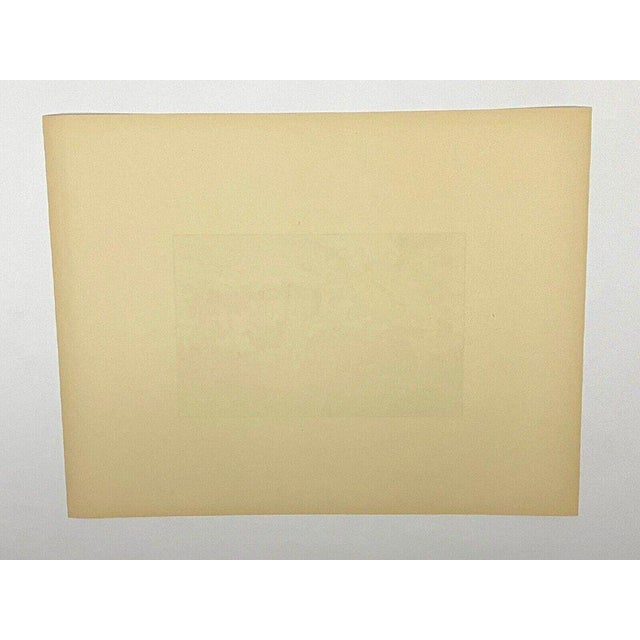 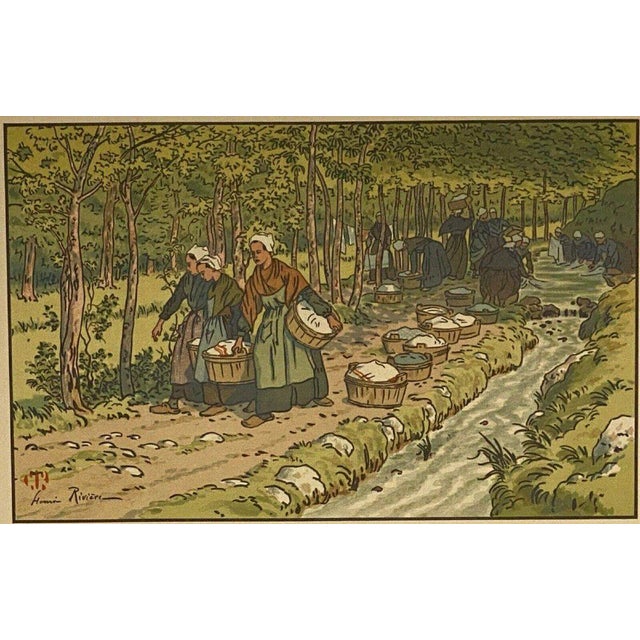 Lithograph Henri Rivière The Washhouse In Treboul The Beautiful Country Of Brittany Lithograph by Henri Rivière, Le lavoir à Tréboul, … moreLithograph Henri Rivière The Washhouse In Treboul The Beautiful Country Of Brittany Lithograph by Henri Rivière, Le lavoir à Tréboul, plate n° 17, from the series Le beau pays de Bretagne, 1909. Lithograph in 12 colors edited by Eugène Verneau in Paris. Signed, and monogrammed with red stamp in the plate. Proof on glossy ivory vellum. Printing at 1000 proofs. Note that the litho has a small fold in the margin at the bottom in the middle, slight black dots in the margin, the colors have remained very fresh, it is in good general condition. We have taken as many photos of the defects as possible so that you can judge the condition. Sold as presented. Henri Rivière, born in 1864 in Paris, died in 1951 in Sucy-en-Brie, is a French painter, engraver and illustrator. He began his career with drawing (strongly inspired by the works of Gustave Doré) then with intaglio engraving and specifically etching in 1882. At the same time, he began a career as a director and scenographer, in 1886, of the shadow theater at the Cabaret du Chat noir, shows that he enhances by creating very innovative color sets. He ensured the artistic direction until the closing of the Black Cat in 1897. He then devoted himself exclusively to painting and engraving and imposed himself in the history of etching, printmaking, woodcut, lithography and watercolour. Henri Rivière was born in 1864 in Paris. Through his mother Henriette, he was the nephew of Alphonse-Henri-François Leroux (1831-1895), a chicory industrialist in Orchies. His father is a haberdasher and a native of Ax-les-Thermes. The young Rivière was trained in pictorial art in 1880 by the history painter Émile Bin, then delivered illustrations to various newspapers [Which ones?]. In 1882, meeting Rodolphe Salis, he was appointed editorial secretary of the weekly magazine Chat noir. In 1886 he became the head of the Chat Noir theater project, which opened its doors at no. 12 rue Victor-Massé in December 1887. Renewing the shadow theatre, he created the set for the show La Tentation de Saint-Antoine, on a text by Édouard Norès based on the poem by Gustave Flaubert, painted on colored glass plates in the background, while the characters, cut out of a sheet of zinc, appear in the foreground like a shadow projected by a lamp placed under the stage, a little forward, sending its rays obliquely. He designed the staging and all the sets until the theater closed in 1897. In addition to La Tentation, he created La Marche à l'étoile, a mystery in 10 paintings (1893), to poems and music by Georges Fragerolle , as well as The Prodigal Son, and a Sainte-Geneviève with the same. In addition, from 1885 to 1895, he stayed every summer in Saint-Briac-sur-Mer, while traveling to other places in Brittany, always fascinated by the sea. In 1888, Auguste Lepère created with Félix Bracquemond, Daniel Vierge and Tony Beltrand, the magazine L'Estampe originale, in order to interest artists and amateurs in new processes and trends in engraving, particularly in colour. In this period when Japanism had a great influence on the decorative arts, Henri Rivière produced from this date, from 1888 to 1902, The Thirty-six Views of the Eiffel Tower. In 1891, Vallotton also renews the wood engraving, with Gauguin or Émile Bernard and Toulouse-Lautrec in turn revolutionizes the art of the poster, by designing that intended for the famous cabaret opened in 1889, entitled Moulin-Rouge - La Goulue , followed by the one made in 1894 by Alfons Mucha for Sarah Bernhardt in the role of Gismonda. He married in 1895 with Eugénie Ley and lived at no. 29 boulevard de Clichy in Paris. The couple had a house built in Loguivy-de-la-Mer (Ploubazlanec, at the mouth of the Trieux), and it was there that the summers were spent until 1913. In 1912, on the death of his brother Jules, he takes care of his nephew Georges-Henri Rivière, future museologist. In 1917, Henri Rivière ceased to express himself through printmaking, and he used watercolour, which had already been practiced somewhat since 1890 (he painted around a thousand watercolors). He traveled a lot, spent the Second World War in Buis-les-Baronnies where his wife died in 1943, became blind in 1944, and dictated his memoirs, published in 2004 under the title Les Détours du chemin. The photos are an integral part of the description. View dimensions: Height: 23 cm Width: 35.5 cm Dimensions: Height: 50.2 cm Width: 64.5 cm M943 less