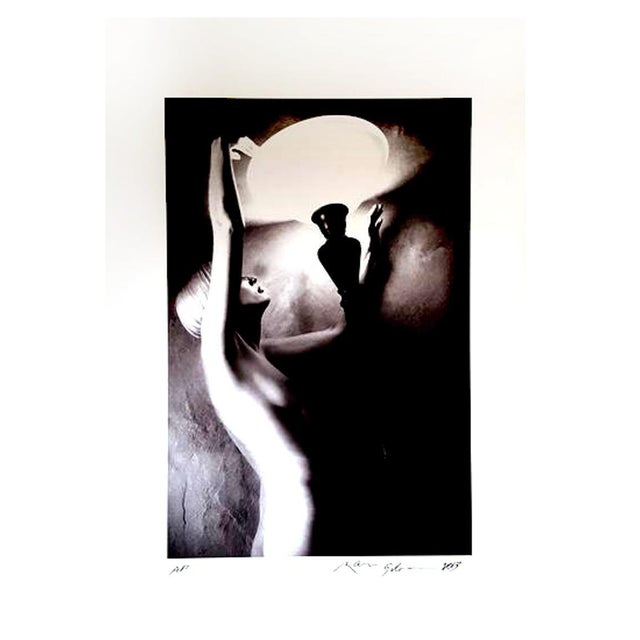 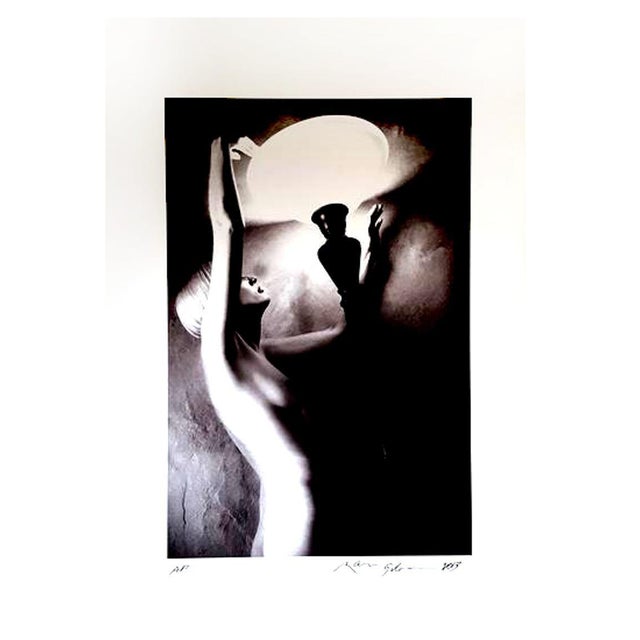 Ralph gibson nude woman portrait signed and dated 2013 dimensions: 19'' x 13'' ralph gibson was born in los angeles, … moreRalph gibson nude woman portrait signed and dated 2013 dimensions: 19'' x 13'' ralph gibson was born in los angeles, california, in 1939. Today he lives and works in new york. He served as a photographer's mate in the u.s. Navy from 1956 to 1960. After his service he studied painting and photography at the san francisco art institute from 1960-61. In 1961-1962, he worked as a printing assistant to photographer dorothea lange. It was lange who gave him the most important advice of his career - to find his ''departure point.'' in 1963 he moved back to los angeles. Between 1967 and 1969, gibson assisted robert frank on the film, me and my brother. Starting with the strip (los angeles, 1966), he began to publish his work in book form, though the reception of his first volumes was poor. His photographs of this early period were in a documentary style influenced by frank, henri cartier-bresson and william klein, and in fact, bruce davidson and mary ellen mark presented him to magnum photos for membership consideration. According to gibson, he began to understand his ''departure point,'' when in the process of analyzing his documentary work, he realized that his interest in the hand was a common thread throughout much of his work. Gibson was unable to sell his first book of this new work to a publisher. In 1969 gibson moved to new york, where he formed lustrum press in order to exert control over the reproduction of his work. His images often incorporated fragments with erotic and mysterious undertones, building narrative meaning through contextualization and surreal juxtaposition. A shift in gibson's work appeared in the 1970s and he began to create surreal images. Published in book form for which he is best known. In 1970 he published the somnambulist, followed in 1972 by deja-vu, and in 1974 by days at sea. These works established gibson's career in creative photography. The control he exercised over each publication enabled him to organize the images associatively in the manner of a dream sequence. Both the individual black-and-white photographs, printed in high contrast, and their arrangement made use of enigmatic juxtapositions, reflecting the influence of surrealism. In 1975 gibson's work moved away from books toward exhibitions. He joined castelli graphics the same year, and had his first exhibition there, quadrants, in 1976. Since the early 1970s gibson's photographic series have been published in over 18 books, several through his own lustrum press. In the 1980s gibson's work became more formal. This work, which can only be touched on here, is represented by a few of the more than 15 published monographs including; syntax (1983), tropism (1987), l'anonyme (1987), and l'histoire de france (1991). Gibson divides his time between new york and paris. Gibson's work is included in important collections including the museum of modern art, the whitney museum of modern art, the international center for creative photography, museum ludwig, cologne, west germany and the stedelijk museum, amsterdam among many others. Born january 16th, 1939, los angeles, california resides new york, new york education 1967-68: assistant to robert frank 1961-62: assistant to dorthea lange 1960-62: san francisco art institute 1956-60: studied photography, u.s. Navy awards 2016 photographer of the year, palm springs fine art fair ​2015 guild hall academy of the arts lifetime award 2015 american academy of arts and letters purchase award 2011 fotomentor lifetime award, palm beach photographic center 2007 the lucie award 2002 appointed, commandeur de l'ordre des arts et des lettres de france 1999 silver plum design trust for public space 1997 doctor of fine arts, ohio wesleyan university 1994 grand medal of the city of arles, france 1991 honorary doctor of fine arts, university of maryland 1989 eastman kodak grant to photography, ''l'histoire de france '' ''150 years of photography'' award, photographic society of japan 1988 leica medal of excellence award 1986 decorated, officier de l'ordre des arts et des lettres de france national endowment for the arts fellowship 1985 john simon guggenheim memorial fellowship 1977 d.a.a.d west berlin, germany c.a.p.s., new york state council of the arts fellowship 1975 national endowment for the arts fellowship 1973 national endowment for the arts fellowship current chair, department of contemporary photography new york film academy less