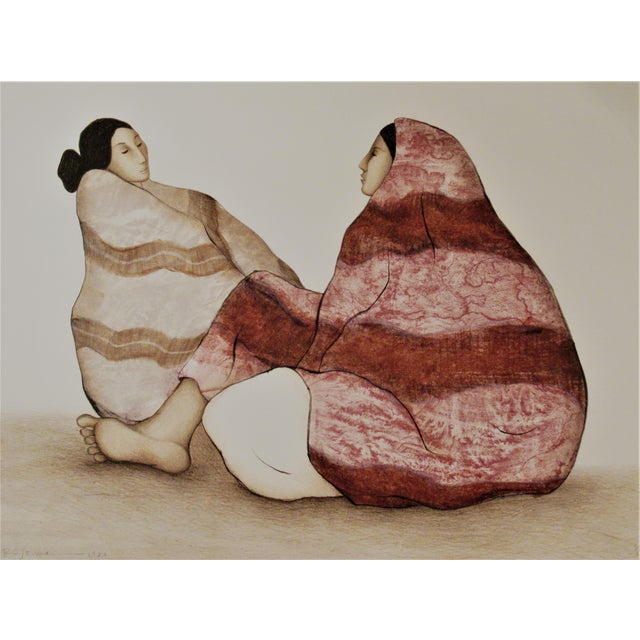 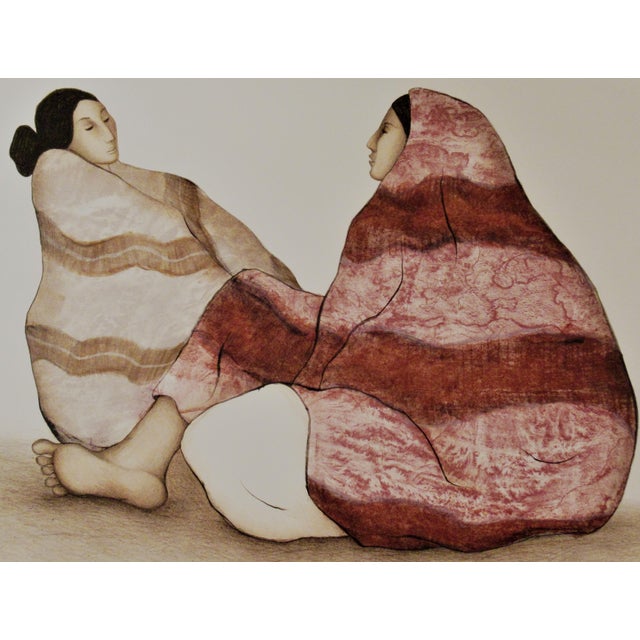 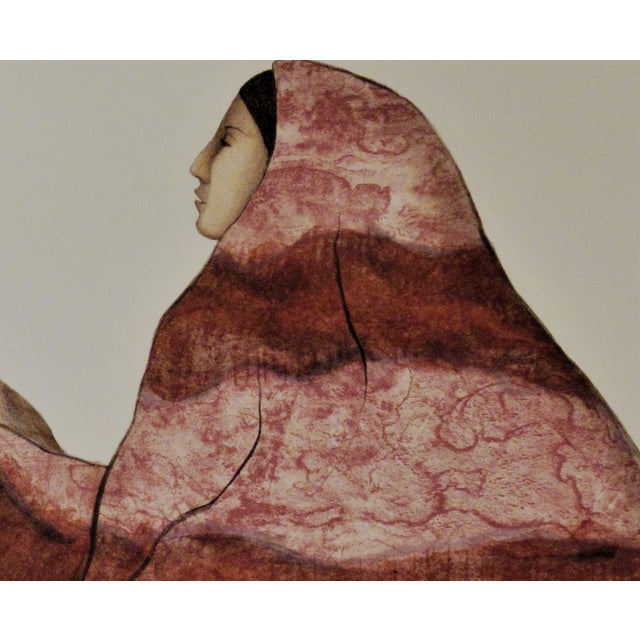 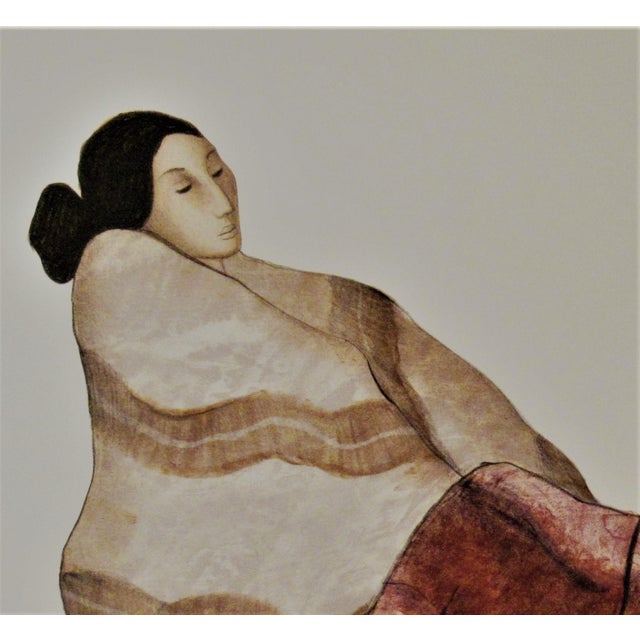 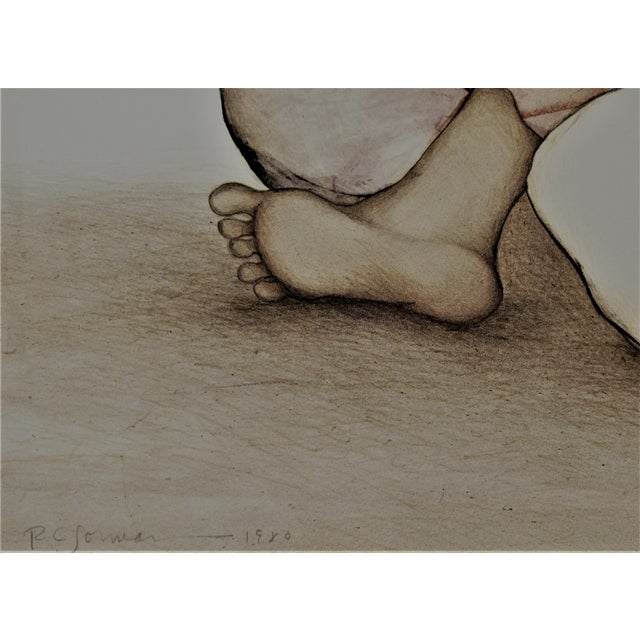 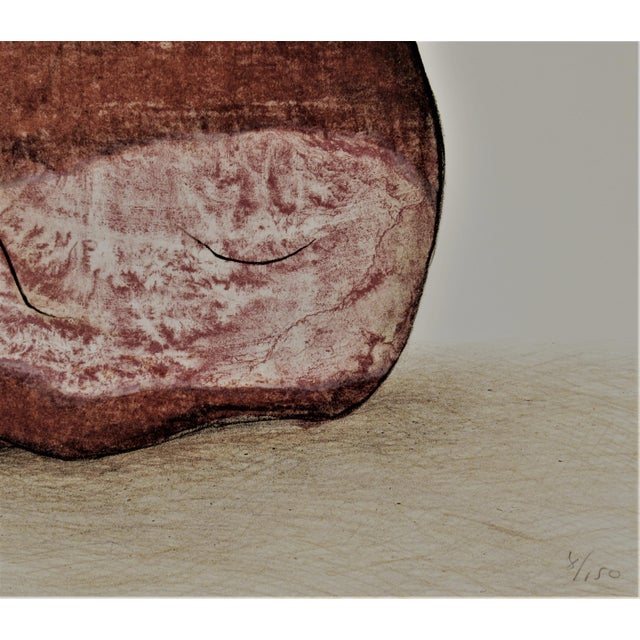 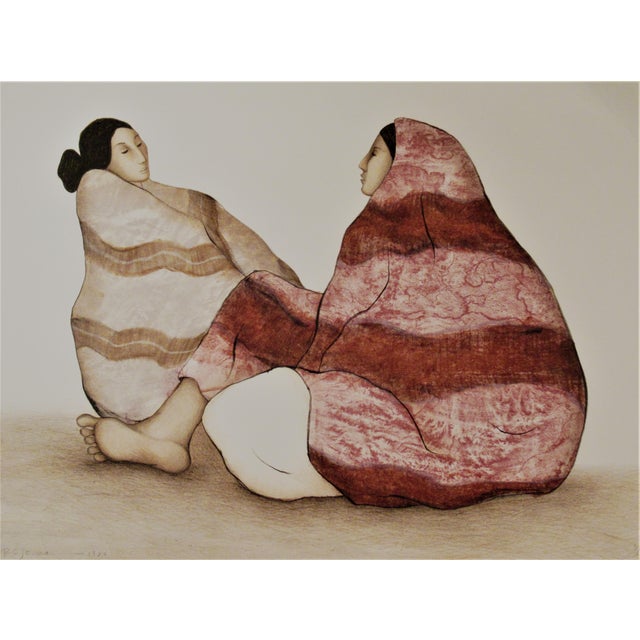 About the artist:
Born in Canyon de Chelly, Arizona and raised in a hogan on the Navajo Reservation, R.C. Gorman became one of the Southwest's best known late 20th-century artists. His signature works were Navajo women in a variety of poses. Many persons have been fascinated by the fact that he, an Indian artist, became famous in the white man's world with some calling him the "Picasso of Indian artists". Of this kind of attention, he said: "I wish people would quit pushing my being Indian. The only time I was interviewed as If I were a normal person was by the Jewish Press in Tucson. It was the first time I felt international and almost white". (Samuels 222)
His parents were Carl Nelson Gorman, artist, and Adella Katherine Brown. He abandoned the name "Rudolph" and signed his artwork with the initials R.C. He grew up during the Depression years, and he later said his first materials were "sand, rocks, and mud." His father, Carl, was one of the first Indian artists to depart from tradition and paint from his own personal expression, but R.C. seldom saw his father during his early childhood because he was away during the war,serving in the South Pacific as one of the Code Talkers---Navajos who used their language as secret code to foil the enemy.
Women, particularly his maternal grandmother, were primary influences and remain the focus of most of his paintings and prints. She spent much time with him during his childhood, and they herded sheep together, and he often drew on the rocks including a depiction of a nude woman that brought him a scolding. She told him the Navajo traditions and legends, sang the old songs, and taught him about plants and animals.
His mother, who had been sent away to government schools, directed him more towards the Anglo world and spoke to him only in English. She oversaw his education, and he first attended Chinle Public School. At age 10, he went to Flagstaff, shipped there in a cattle car with his mother, to work in the Navajo Ordnance. On the way, he saw his first painting at a stop at Hopiland at Moencopi Trading Post, and couldn't get it out of his mind.
After that he attended St. Michael's, a Catholic boarding school on the Navajo Reservation, from where he was expelled. Next he went to Ganado Presbyterian Mission School where well-known Southwest trader Don Lorenzo Hubbell had a trading post nearby and was a key figure in helping with the organizing of the school. A Dr. Clarence Salsbury was Director of Education and encouraged Gorman with his unique talents, which were recognized by many students and faculty members. Many years later, in 1978, The College of Ganado awarded Gorman an honorary Doctorate of Fine Arts, which he later said was the highest honor he had received.
He went to college in Flagstaff at Northern Arizona University, and in 1951 enlisted in the Navy for four years during the Korean War, but never quit drawing. In 1955, he re-enrolled at Northern Arizona University, studying literature and art, and illustrated for a school magazine.
A trip to Mexico and later a year long study scholarship really excited him, especially viewing murals by Orozco, Rivera, and Siqueiros, and sculpture by Zuniga because these artists were depicting realistic people. Their works were a catalyst for his decision to paint likenesses and create lithographs of people from his own heritage.
However, Gorman did not stay long on the Navajo reservation. In 1962, he left and would return only for visits. He moved to San Francisco where he had successful exhibitions of his work and earned the patronage of Charles and Ruth de Young Elkus, who encouraged young Indian talent.
In 1964, he went to Taos, New Mexico, and shortly after had an exhibition there in the Manchester Gallery. He returned to San Francisco where he went through a period of doing surreal landscapes but made frequent trips to Taos. He also had several joint exhibitions with his father, Carl Gorman, and in 1968 purchased the Manchester Gallery in Taos, renaming it the Navajo Gallery. From then it was his studio and home.
In the 1970s, he became a nationally known artist, and visitors to the Southwest were taking his work to all parts of the country. He also opened a gallery in Tubac, Arizona, about 40 miles south of Tucson, and conducted numerous workshops. During that decade, he first experimented with lithography, studying with Jose Sanchez in Mexico City. He did etchings, silk screen, sculpture, and ceramics and also began his pastel, watercolor wash full-bodied Indian women that became his trademark. Of this subject matter, he said: "I choose models who have full bodies--something you can put your two arms around and feel a real woman. I like the ample figure because it fills space softly" (Monthan, "R.C. Gorman, 29).
His daily work schedule has been one of arriving at his studio about 8:30 AM, working intensely, eating a long lunch with a glass of wine, returning to work for an hour or so, and then disappearing until the next day.
Gorman's work is in many permanent museum collections. A few include: The Museum of Indian Arts, San Fransisco, CA; The Heard Museum, Phoenix, AZ; Museum of Northern Arizona, Flagstaff, AZ; Philbrook Art Center, Tulsa, OK; U.S. Department of Interior, Washington, D.C.; Dallas Museum of Art, Dallas, TX; Indianapolis Museum of Art, Indianapolis, IN; and the New Mexico Museum of Fine Art. less