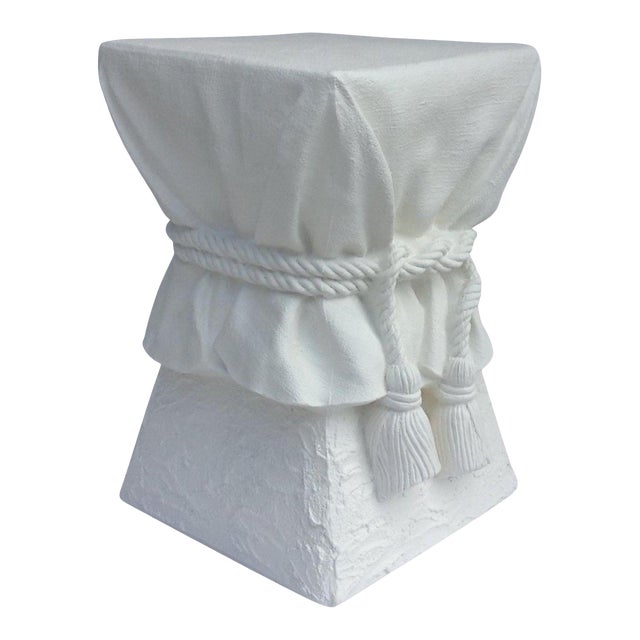 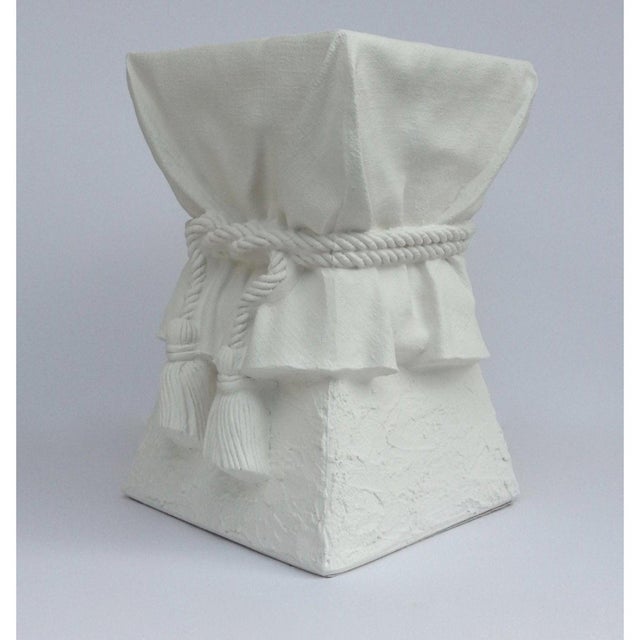 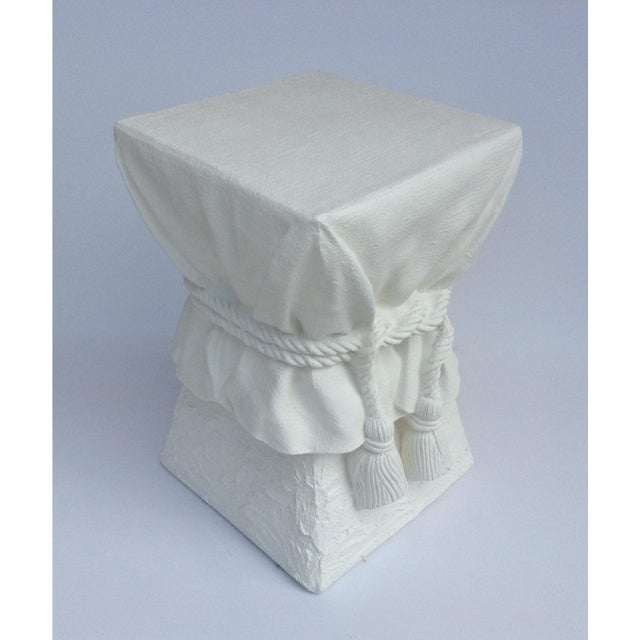 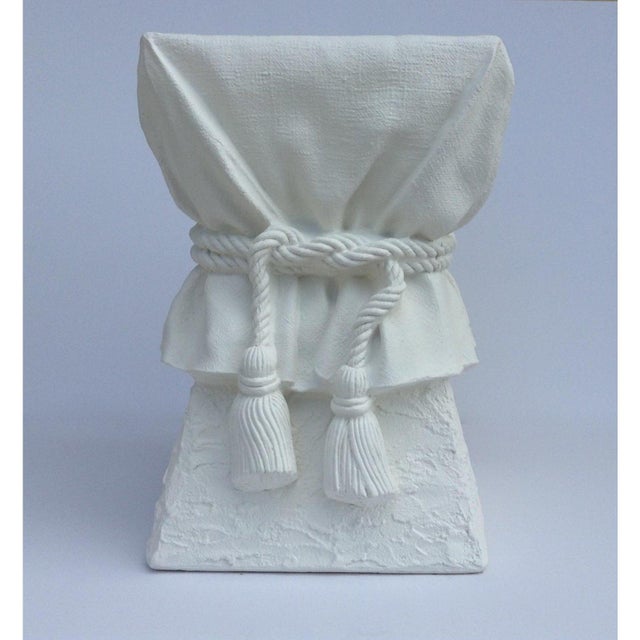 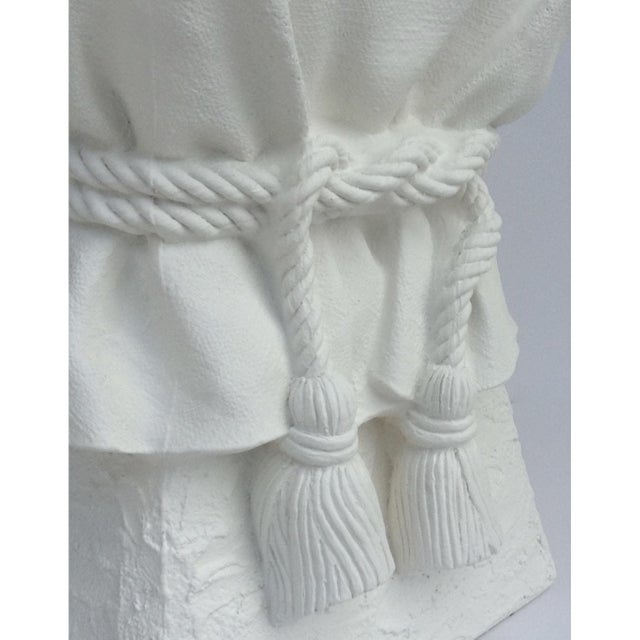 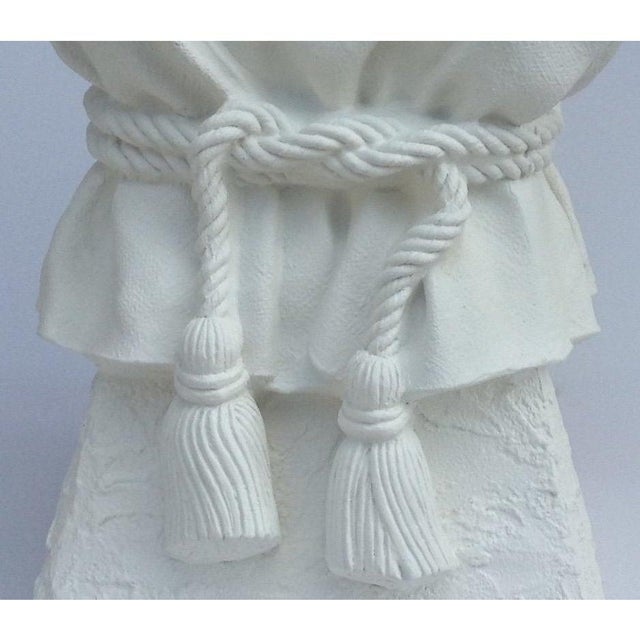 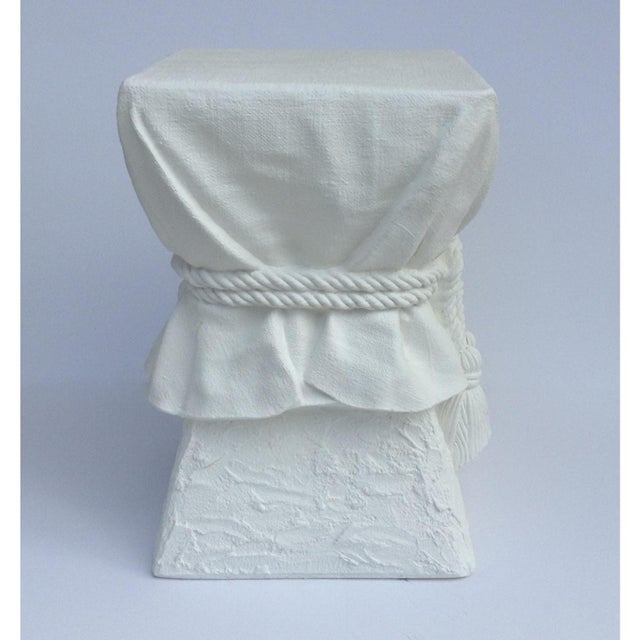 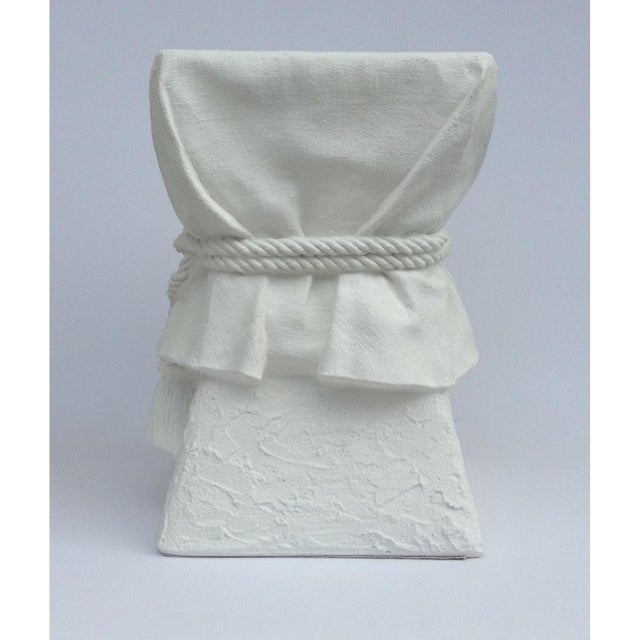 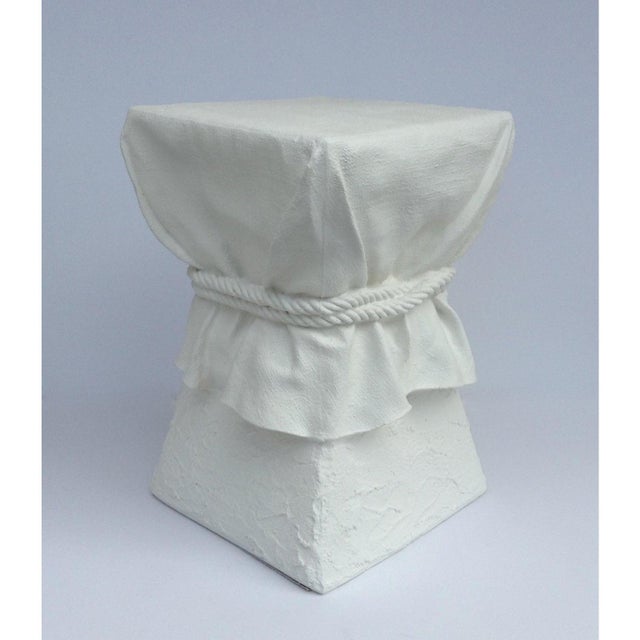 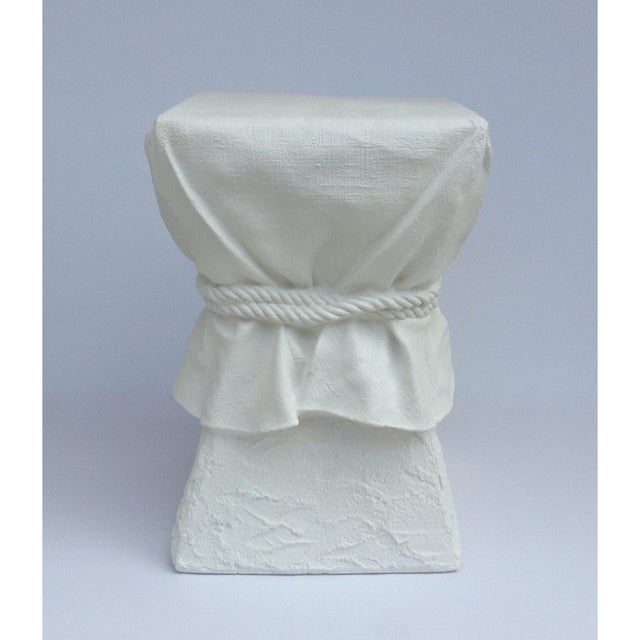 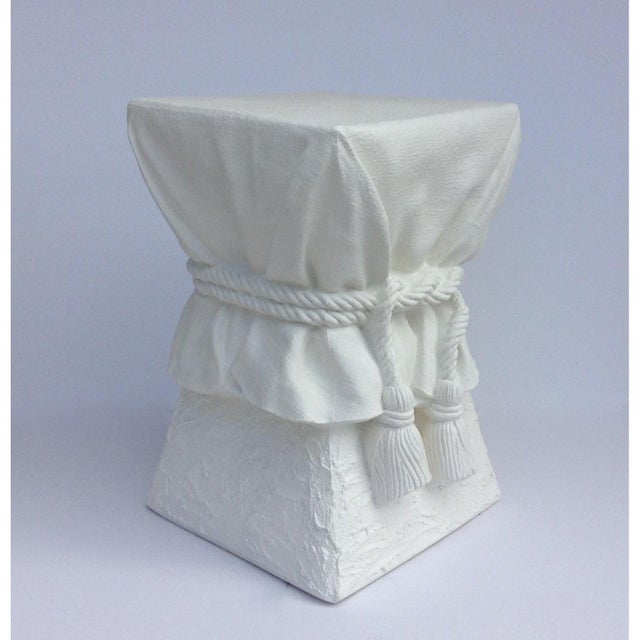 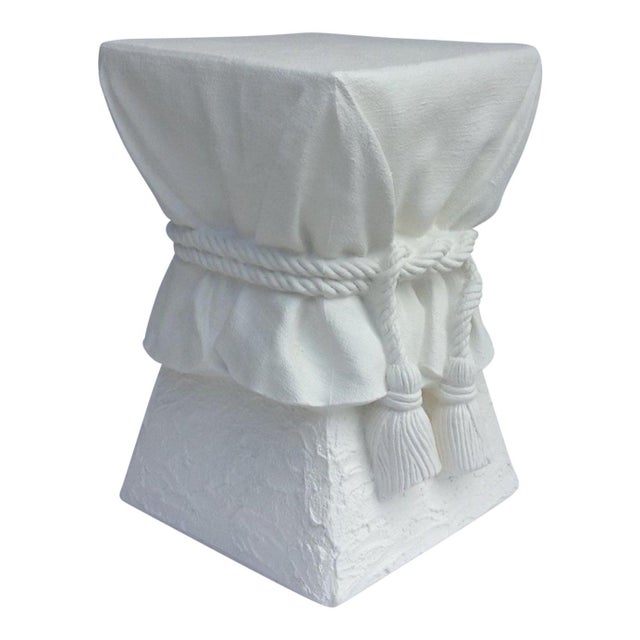 Vintage: Late C.1960's early 1970's, Mid-Cenutry Modern, Sculptural John Dickinson attributed, plaster, tromp l'oeil, cinched rope tassel side/end or occasional … moreVintage: Late C.1960's early 1970's, Mid-Cenutry Modern, Sculptural John Dickinson attributed, plaster, tromp l'oeil, cinched rope tassel side/end or occasional drinks table. This table is an eclectic, creative and artistic wonder, with form and function extraordinaire. The table has been crafted in plaster, with a faux linen wrapped finish to the upper portion of this table, which mimics burl wrap cinched cloth, along with the pediment diamond shaped and sculpted textural base, but a true artisanal and sculptural wonder. Most alluring is the "fool the eye," draped top, it is linen draped with the top cinched, as mentioned beforehand, with a knotted, tassel rope, cinched and tied surround. This table came from owners who are quite quirky with a varied and eclectic interior, but who have had 2 of these tables for over their entirety, as the "only," owners, but given the environment they were in and found in, we took the liberty to enliven and restore these tables, as they needed a restoration process to enliven them to their original look, even though they were well maintained, the finish had faded, with minute if any small flea bite chips, which also have been restored, to it's original look. and intention. Black felted base bottom, round off these sophisticated conversational tables, sculptural and iconic in their glory and highly sturdy and structural, with varied uses and capabilities, as we have also seen people have glass custom made for these tables, but we choose to not detract the artistic, Bohemian to Boho Chic, style given the sophistication and eclectic inclusion into any type of interior dwelling or domain, given the diaspora of the interior. We have seen these paired in apposing ended family/living areas including enclosed porticos and sun rooms, but we have also seen these being utilized as a garden seat, sometimes with or without seat cushions, depending again to each his/her own desirability. John Dickinson was known for having executed pieces of "tromp oil," distinction, the whimsy tactile sophistication and process, given to actual sculptural but transferred into furniture design. He introduced collections, that were being sold within the "To the Trade," in plaster, either in a "tromp oil," faux bois," faux animal hoofed pieces, pieces with quasi African influences, in the production of mirrors, tables, consoles, and lighting all with the faux Industry along represented showrooms, such as Donghia, into the early days of Angelo Donghia opening his vast endeavor and fairy into the Interior Design empire of opening showrooms throughout the United States. The first Donghia Showroom opened in L.A. Eclecticism and uniqueness, bar none along with the Dickinson line was par course into Donghia's mystique and following, which grew exponentially in America. John Dickinson was a Californian and a friend of Angelo's, thus it made the pivot into this foray an easy confluence of inclusive styles within Donghia represented showrooms. He chose nothing but the most eclectic lines to imbue and interweave within his furniture, lighting and textile and wallpaper lines within Donghia's collections. There is ALSO another lsiting within this store front of a Dickinson, "Plaster Palm Tree Cactus Lamp," the Real McCoy, but quite solid and heavy, sourced from a Sarasota, Florida Estate, as are these 2 single-listed tables herein, from a different Sarasota Estate altogether.

*There are 2 of these available for purchase separately. should you inquire within either to Support or within the listing in the Comment Fields.*

This table/garden Seat may be able to be used as a table and/or a seat, depending upon each individuals desirability.
Seat Height: 18H"
Table weighs 35 lbs. of solid formed girth. less

Item doesn't ship to Virginia, US
View similar products near you.
Chairish offsets 100% of estimated carbon emissions from shipping