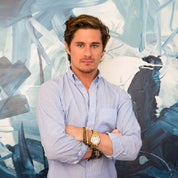 Click follow me to be notified about new products from this shop. You are now following William R. McLure IV

William Rankin McLure IV was born an artist. William was creative since he was a very young child thru his God-given talent of art and design. Born in Louisiana, he and his family soon moved back to Alabama to be close to a large and loving family and to live on a family farm. William’s kindergarten teacher recognized his talent and wrote his mother a note when William was 4 years old for her to recognize, support, encourage and nurture William in his creativity and said that one day he would be a famous artist. His talents have grown from there, to him now being a self-employed artist and interior designer. William graduated from The Southern Institute of Design, where he was active in the American Society of Interior Designers as a student. His artwork can evolve from realism, to drawings, to sketches, to abstract at any given moment, and many times being created in literal hours during long evenings at home. His design work and art were highlighted in the 2013 Cathedral Antique’s Show House in Atlanta. His latest exhibit was a literal one-day sell out, and his work has been featured on many design and art blogs, including Lonny Magazine, La Dolce Vita, Southern Living, Mark D. Sikes, and Atlanta Homes and Lifestyles Magazine. Domino Magazine editor and chief has recognized him as a Southern Style designer and artist to watch and he will be featured in the upcoming coffee table book, Southern Design Style, which will be published by Abrams in 2016.