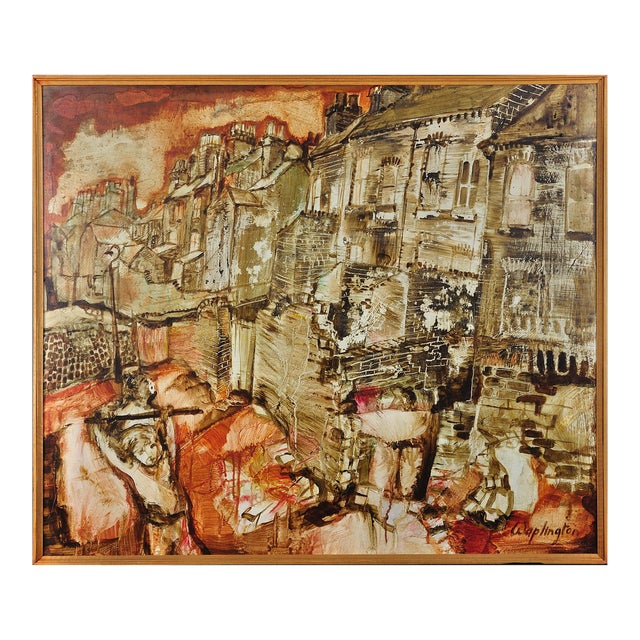 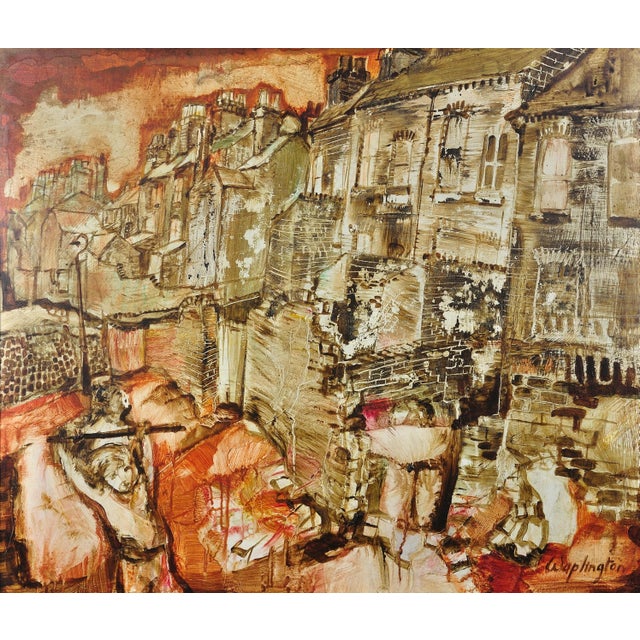 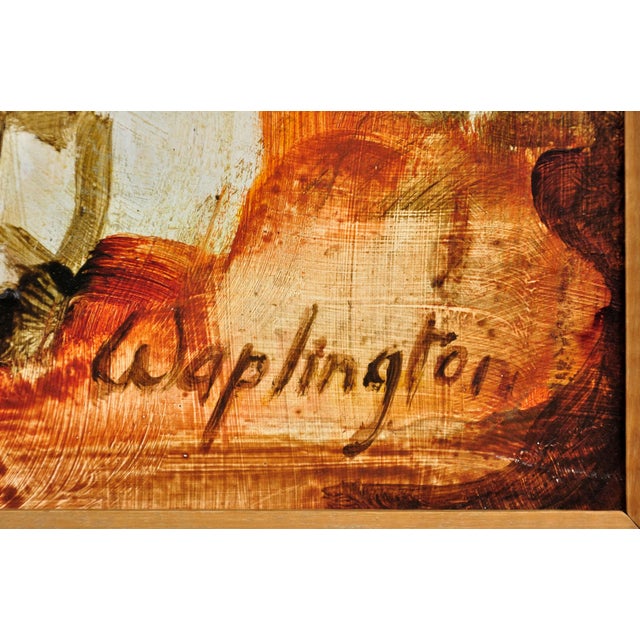 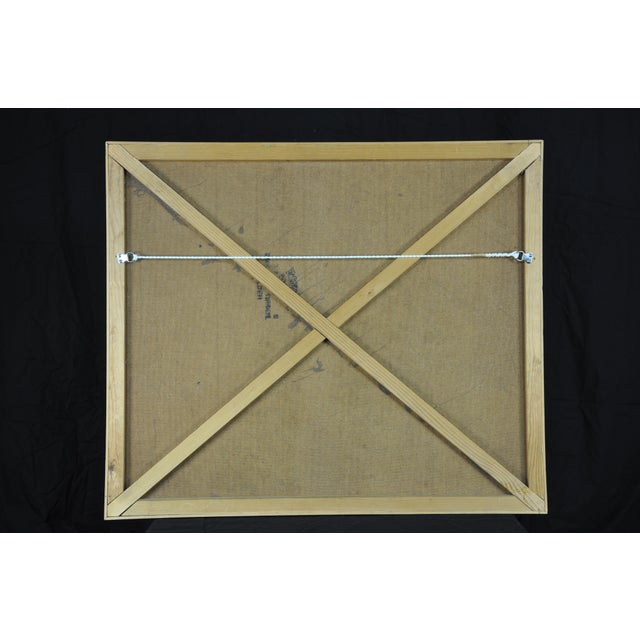 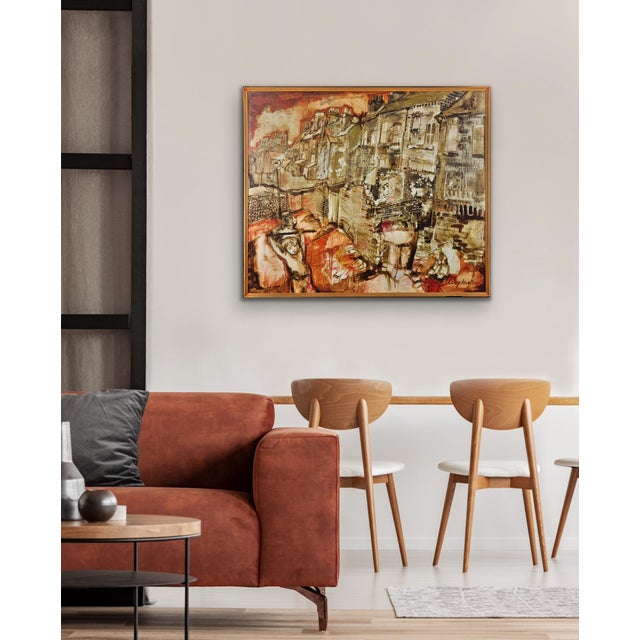 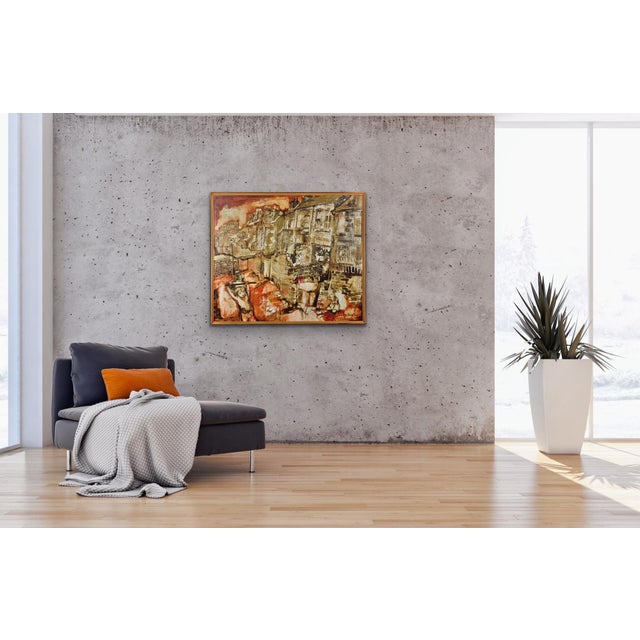 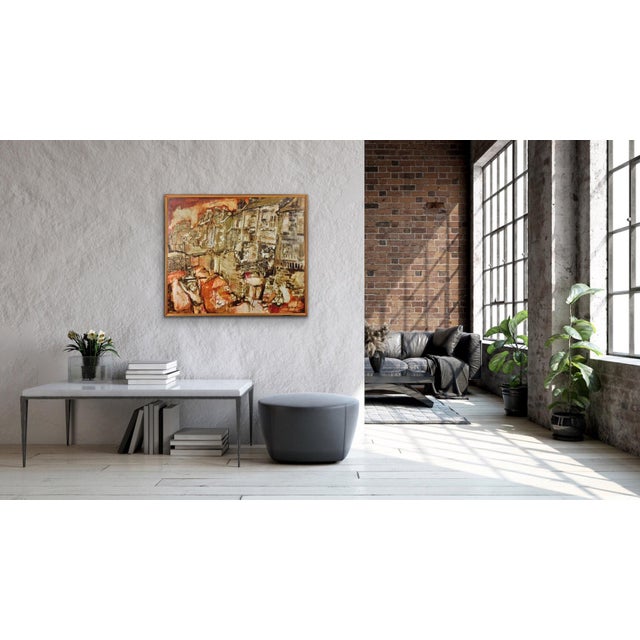 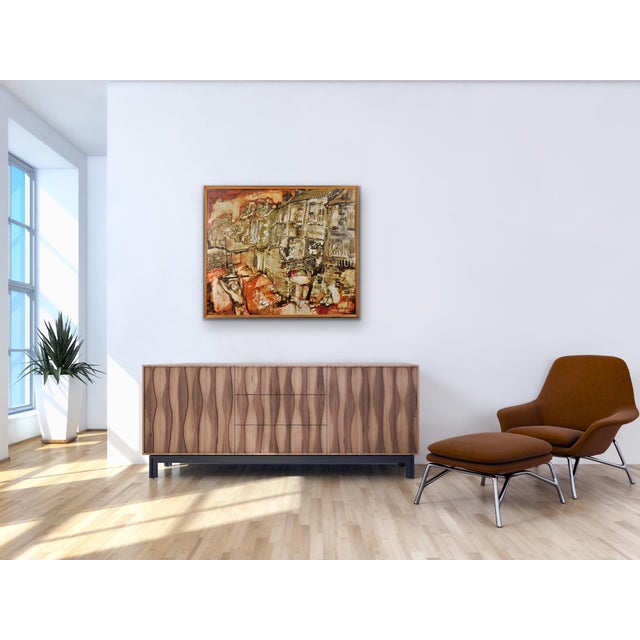 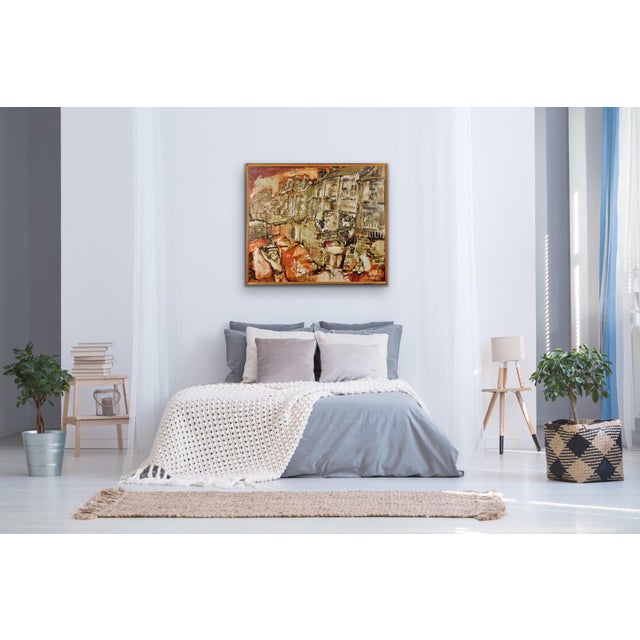 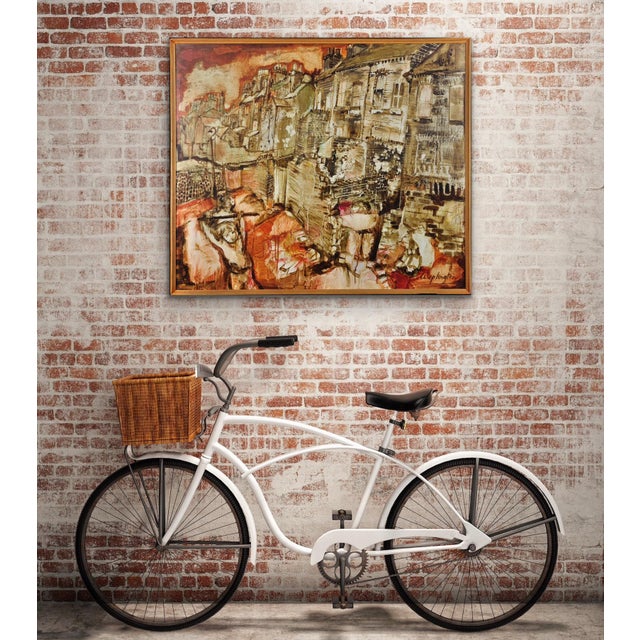 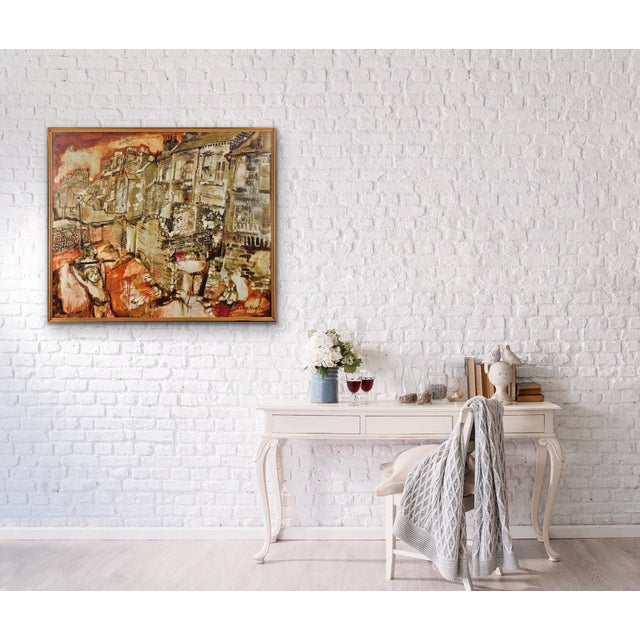 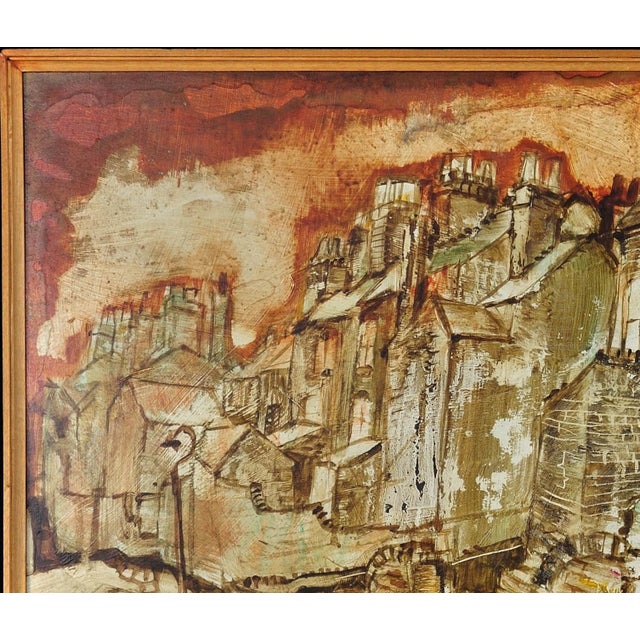 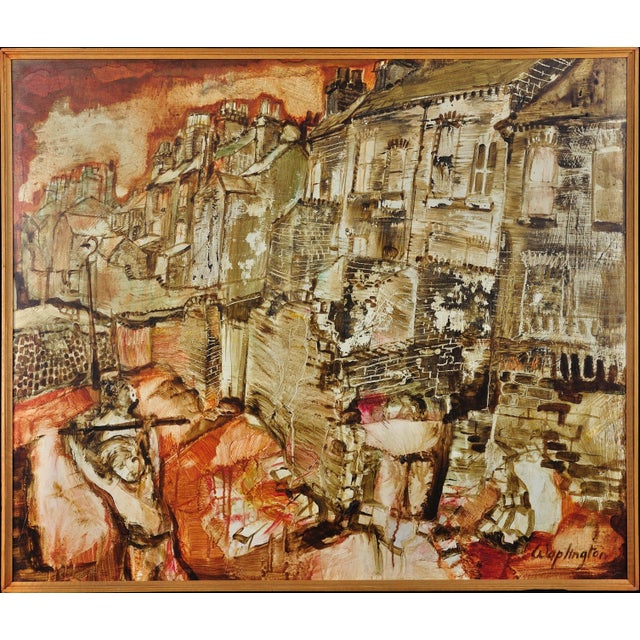 Available for sale from Big Sky Fine Art; this original painting by Paul Waplington dating from the 1970s.
The painting is presented and supplied in its original bare wood frame (which is shown in these photographs). The painted surfaces and the board have benefitted from cleaning and conservation, which took place in 2016 on our instructions.
This vintage painting is now in very good condition, commensurate with its age. It wants for nothing and is supplied ready to hang and display.
The painting is signed lower right.

Paul Waplington, is a self-taught working class artist, born and brought up in Nottingham. His father was a milkman. He hated his rough school and failed his 11 plus, and left school as soon as he could at 15. He wanted to be an artist but, without qualifications, was rescued by the lace industry where he got a job earning £1 a week as an apprentice draftsman, designing lace. He liked the job and over the next six years became highly skilled. At 21 he was however made redundant. He then went abroad for a while, to Belgium, where he worked as a pavement artist, and was introduced to by new friends to active politics.

Once back in the UK he became politically active, taking part in the Vietnam solidarity campaign, and the Young Communists League activities, although he never joined any political group. He focused on movements, including the status of ordinary people, including the Labour and trade union movements.

He returned to work in the lace industry, doing freelance work and teaching art classes. From the 1970s he painted professionally and tried his hand at landscapes, both locally and around Devon. He did not want to “sell out” to commercial tastes though and began to draw and paint what he saw, the terraced streets and factories around him. He also attended life classes at the Nottingham Society of Artists. His main subjects were to be workplaces and workers in their everyday environment. His works reflected affection and respect, but not sentimentality. He evolved a beautifully rhythmic, gutsy style and a quirky sense of perspective and detail to capture the liveliness of the scenes around him.

His art had a political dimension, which is to praise ordinary working life, but had no stated agenda beyond that. He produced a solid and evocative body of work that both celebrated Nottingham and its human communities and portrayed the industrial decline that helped to undermine them.

Waplington became a familiar and active figure in the British art scene in the 1970s and 80s, rising to critical notoriety after a significant exhibition at the Midland Group in 1978.

In 1988, the lace business in Nottingham had all but collapsed and Paul, who was still designing for the trade in Italy and Spain, moved to northern Portugal. There, he bought and restored a ruined smallholding, learnt Portuguese, married Fatima and settled down. Then he gradually started to draw and paint again, this time not terraced streets but fields and the farmers who lived and worked on them. His former beautiful sense of rhythm came back as he expressed his admiration for peasant architecture, and a sense of goodwill towards the people who eked out a tough existence in the granite hills. Although his Portuguese work is in the rich Mediterranean hues of the countryside, his art still celebrates the ordinary man and is an unblinkered, heartfelt response to a hard but rich way of life that is rapidly being lost. Paul still lives in Portugal, near to Covas, with his wife, Fatima.

In November 2013 to January 2014 there was a fine and long-overdue solo retrospective of Waplington’s art at Nottingham Castle. Waplington came back from Portugal for the opening and gave an afternoon talk. The show was in three parts, one being devoted to a documentary that was made about him and the work he did in the lace industry, the other two parts being dedicated to paintings of the steel and coal industries in Sheffield, Leicestershire and Nottinghamshire in the 1980s and paintings of life in inner-city Nottingham, mainly in the 1970s. His portrayals of the decline of the mining industry in the region was very much in the proud tradition of the Pitmen Painters of the 1930s. At the centre of the Nottingham Castle exhibition was the large banner Waplington painted in 1986 for Hucknall NUM, commemorating the 1984-5 miner’s strike.

Today the body of work that Waplington left in the UK are a colourful, vivid and exciting depiction of an era that has gone. His work now belongs to many public collections, including Glasgow Museums, Sheffield City Gallery, Sheffield University, Manchester City Galleries, Leicestershire County Council, the Arts Council Collection and Nottingham University NHS Trust. less

Seller Managed Delivery
This item is shipping across international borders. Smaller items shipped via parcel may take up to 14 days after shipment. For more about shipping timelines for larger items, please message the seller.
Transiting customs may cause delays outside the control of the Seller or Chairish. Once the order is in transit, the order cannot be canceled.