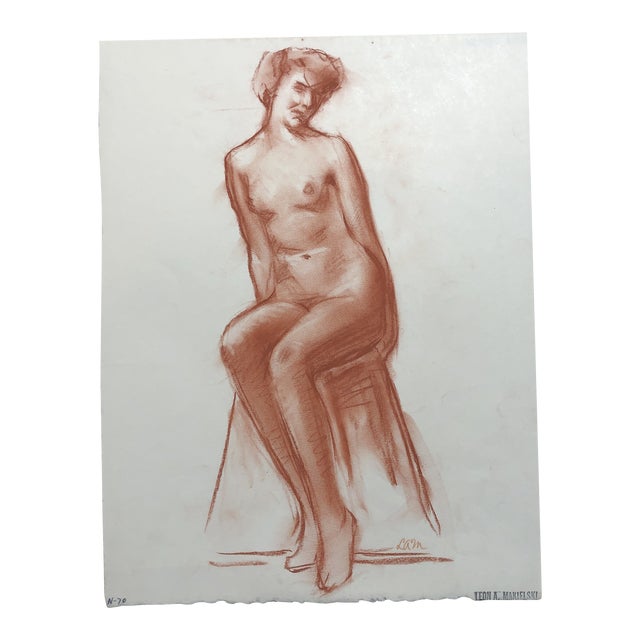 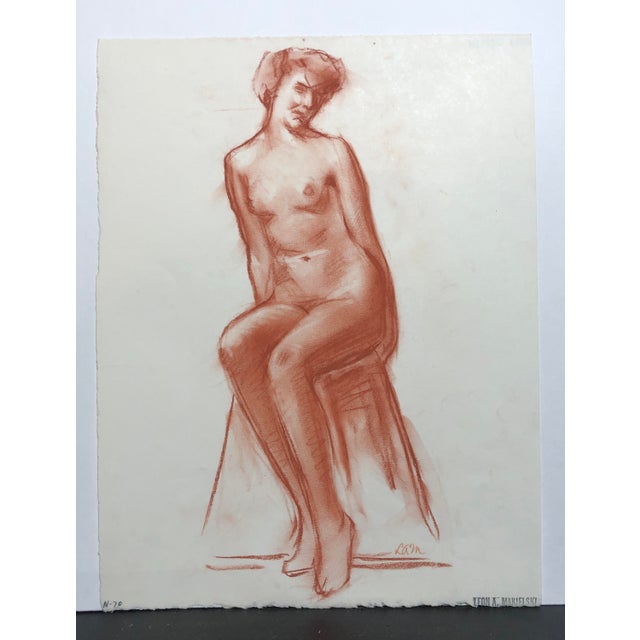 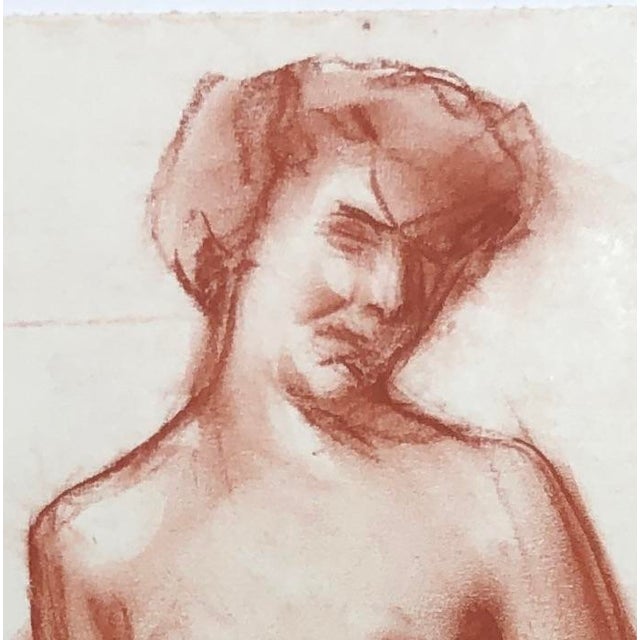 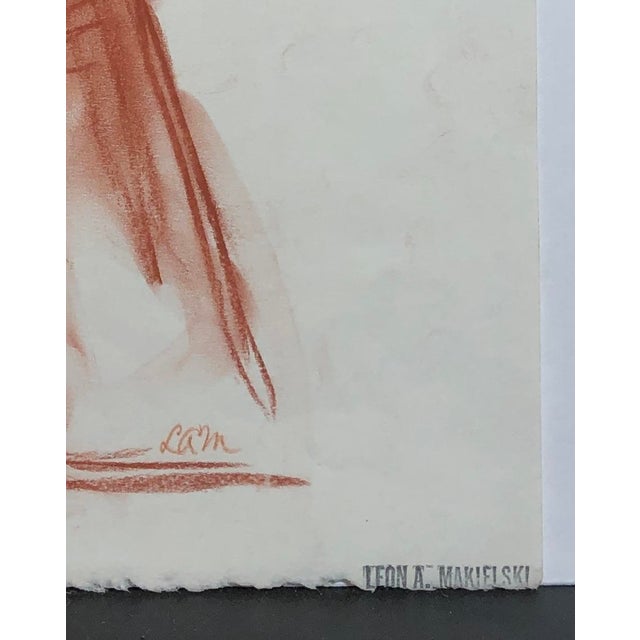 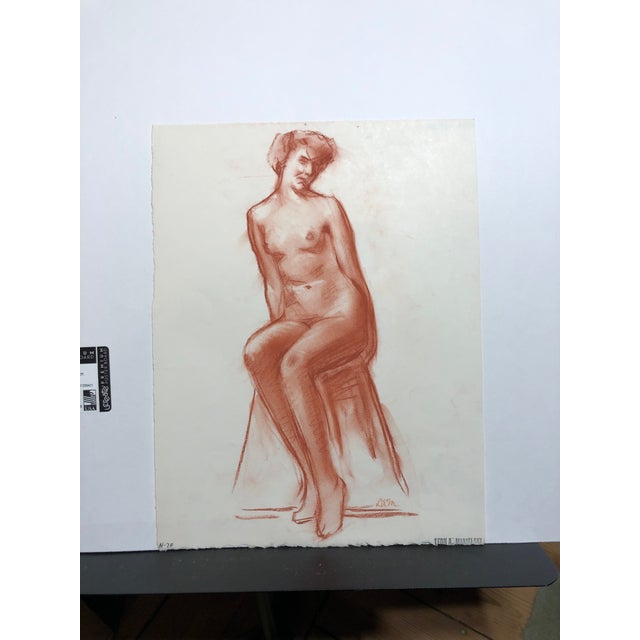 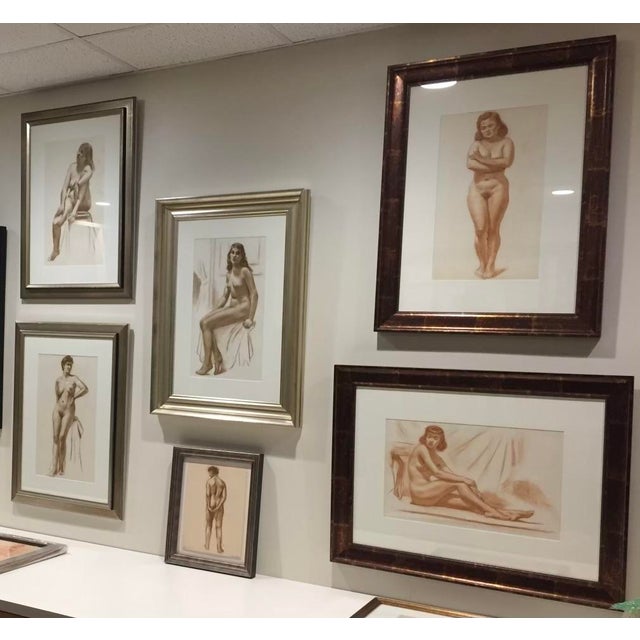 Sitted Female Nude (N70)- WPA Art
• Description: Full body, front
• Ca 1941-1942, drawn during the time of the New Deal, WPA Federal, Art Project
• 1 of 800 pieces found in Makielski’s studio after his death
• Catalog ID: N-70
• Dimensions: Height: 13” x Width: 10”
• Medium: Red Sepia
• Not framed
• Monogrammed: LAM
• Stamped: Leon A. Makielski
• Condition:
o In good shape for 80 year-old sketch book paper;
o May have random marks around the paper;
o May or may not have edge showing this was pulled from a sketchbook;
o Please look closely at the piece before purchase

This piece would look great framed and grouped with other Makielski female pieces available; see photo of other collection.

Born to Polish immigrants in 1885 in Morris Run, Pennsylvania, Leon A. Makielski spent the greater part of his youth in South Bend, Indiana, eventually relocating to Illinois to pursue his education in art at the Art Institute of Chicago.

In 1908 Makielski received the John Quincy Adams Foreign Traveling Scholarship and for four years he made his headquarters in Paris studying at the Académie Julian* and Académie Grande Chaumière*.

From 1908-1912, Leon spent considerable time studying in the greatest galleries in Europe, and painting many scenes and landscapes in France, Italy, Belgium, Holland, England, Switzerland, Poland, Germany and Austria.

Of importance: At the academies, Makielski gained acceptance into the European art community, and demonstrated his talent in portraiture at the 1911 & 1912 Paris Grand Salon. This annual art exhibition begun in 1667 and has been administered by the Société des Artistes François since 1881.

He returned to the U.S. in 1913 to teach art and in 1915 he began teaching at the University of Michigan. After a total of 14 years teaching, Leon left UM to concentrate solely on painting portraits of notable figures, which included UM faculty, prominent professionals and business leaders, as well as state and local politicians. In addition to teaching art at UM, Makielski taught at the Meinzinger Art School and the Jewish Community Center. He was also a Works Progress Administration** (WPA) painter.

Makielski's career as an artist spanned more than 70 years, in which he produced 3,000 paintings, and hundreds of drawings, sketches, and studies. He considered portraiture to be his specialty and created many solely for his own enjoyment. One of his favorite portraits, painted in 1923, is an oil portrait of a young Robert Frost. The two met and became friends while teaching at UM.

He was a nationally recognized and acclaimed artist, receiving honors from the Detroit Institute of Arts, the Art Institute of Chicago, and the St. Louis Museum of Art. The more significant of Makielski's portraits are listed in the Catalog of American Portraits, kept by the National Portrait Gallery at the Smithsonian Institute. Other works are held in the permanent collections of the University of Michigan Museum of Art and the Minneapolis Institute of Arts.

*The Académie Julian was a private art school for painting and sculpture founded in Paris, France. This school, which accepted both women and foreign students, was active from 1868 through 1968. Académie Julian remained famous for the number and quality of artists who attended during the great period of effervescence in the arts in the early twentieth century.

*The Académie de la Grande Chaumière is an art school in the Montparnasse district of Paris, France. The school was founded in 1904 and was devoted to painting and sculpture. It did not teach the strict academic rules of painting, thus producing art free of academic constraints. In 1957, the Académie de la Grande Chaumière was acquired but still operates under its original name.