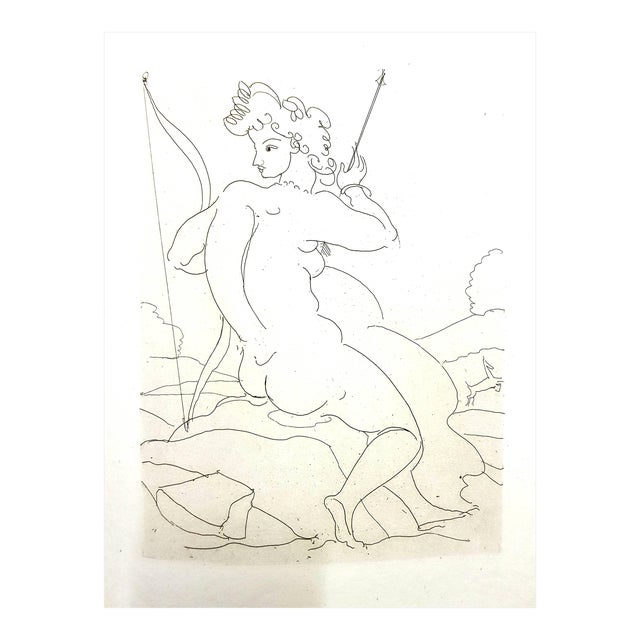 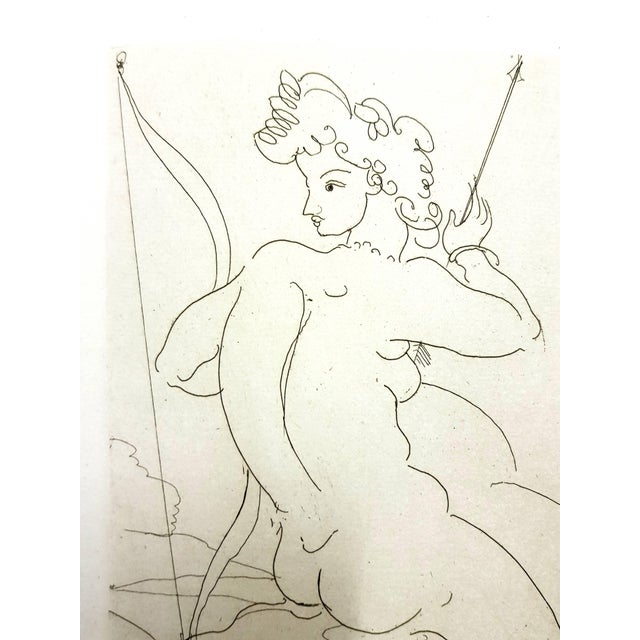 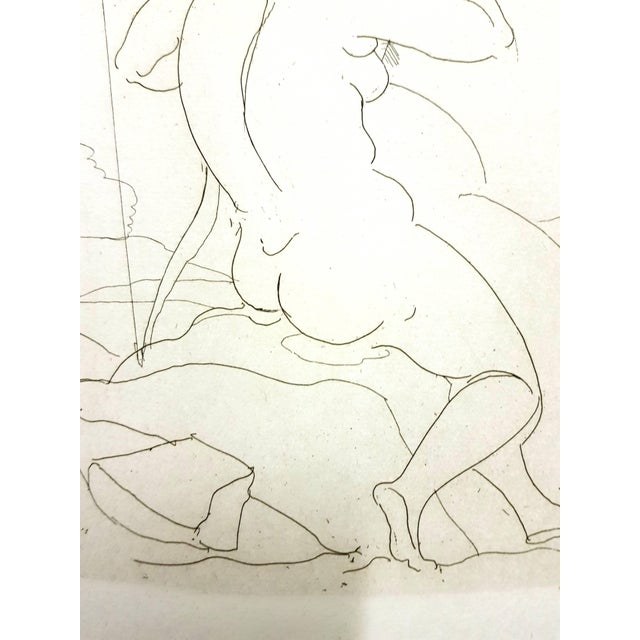 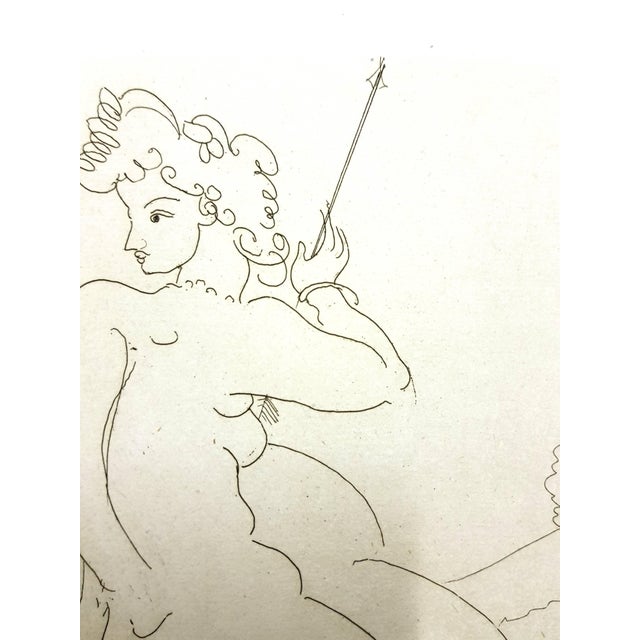 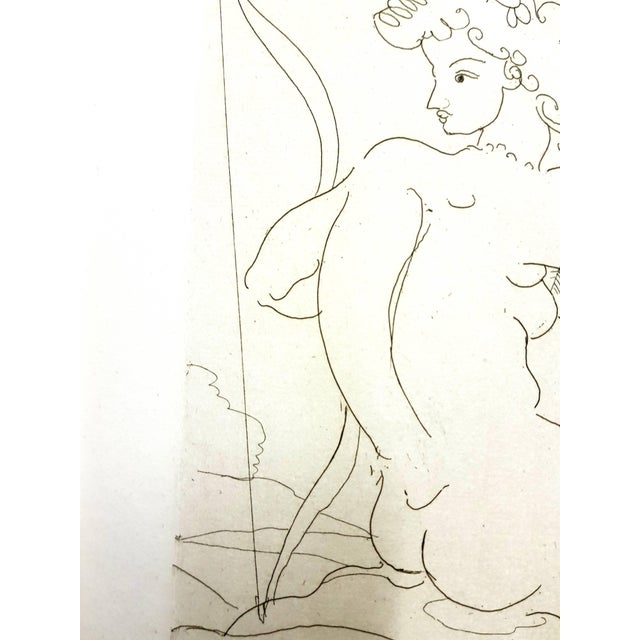 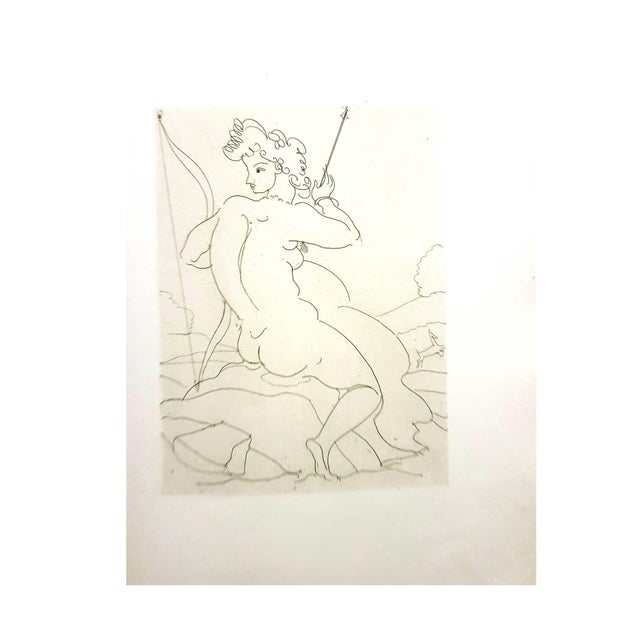 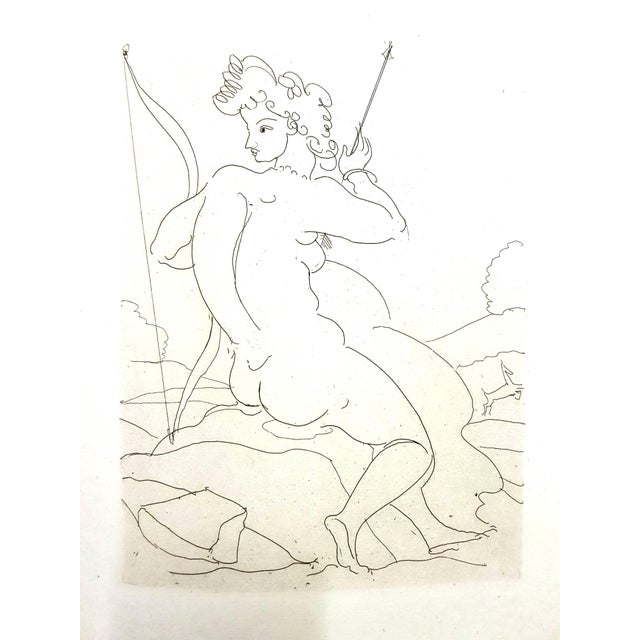 André Derain - Ovid's Heroides Original Etching Edition of 134 Dimensions: 32 x 25 cm Ovide [Marcel Prevost], Héroïdes, Paris, … moreAndré Derain - Ovid's Heroides Original Etching Edition of 134 Dimensions: 32 x 25 cm Ovide [Marcel Prevost], Héroïdes, Paris, Société des Cent-une, 1938 Andre Derain was born in 1880 in Chatou, an artist colony outside Paris. In 1898, he enrolled in the Academie Carriere in Paris where he met Matisse. He attended art school and in 1900, set up a studio with Maurice deVlaminck. After his military service from 1900-1904, Derain exhibited his work at the Salon des Independants and then at the Salon d'Automne with Matisse, Vlaminck and others, thus creating the movement of Fauvism.He worked with Henri Matisse in 1905 at Collioure, and participated in the 1905 Salon d’Automne with Matisse, Vlaminck, and Braque, the exhibition in which this group was labeled as Fauves, or Wild Beasts. Along with Vlaminck, Derain was one of the first artists to collect the tribal art of Africa which was influential to many of the artists of the early 20th century. In 1906, Derain met Picasso and his dealer, who purchased Derain's entire studio, creating newfound financial success. During this time, he was hired for the illustrations for works by Guillaume Apollinaire and Andre Breton. After World War I, his friend's Cubism movement affected his art, along with influence from Classicism and African Art. Derain stayed in Paris during most of the Occupation, where he was esteemed by the Nazis because of his artistic integrity. Hitler's Foreign Minister commissioned him to paint a family portrait, but he politely refused. His popularity began to decline after the war because of disagreement over new artistic movements. He later lost most of his eyesight due to illness, which may have been the reason he was hit by a truck in 1954, dying from shock at the age of 74. Derain’s Fauve paintings are typically bright with intense color. Influenced by the work of Cézanne as well as the early Cubist paintings of Picasso and Braque’s, Derain’s style changed and by 1912, the paintings became more traditional and structured. For the remainder of his career, he continued to investigate different compositional methods including the perspective of Cézanne and the pointillism of Seurat. He also designed ballet sets and made a number of sculptures. At the turn of the century, Andre Derain exhibited at the radical Fauve Salon d’Automne (1905) and was one of the founding members of the Fauvist movement together with his life-long friends Matisse and Vlaminck. The works he produced in this period, often under the guidance of Matisse, have been counted among the masterpieces of Fauvism. From around 1918, Derain turned his back on the avant-garde and had begun to explore some of the more traditional genres of Western art, including landscapes. His main source of inspiration once the Fauves group had dispersed was found in the Louvre, where he admired the early Renaissance works in particular. Talking of his frequent visits there, he once said, ‘That seemed to me then, the true, pure absolute painting.’ His work evolved through many styles and, most significantly, turned back to the past, particularly after 1922 when Lenin had publicly pronounced his disdain for abstract art. Derain built up an immense and fascinating collection of paintings, sculpture and objets d’art throughout his life which aided his experimentation and was reflected in his work between 1930 and 1945. During these years, his painting technique displayed the most avenues of invention, using a repertoire of primitivist motifs. His eclectic collection was constantly changing. In 1930 he sold his African collection in exchange for bronzes of antiquity and the Renaissance which indicated a real change of interest in the objects, as did his later pursuit of Greek ceramic painting and his enthusiasm for grand cycles of literary and antique themes as the 1930s passed. Between 1947 and 1953 Derain focussed on landscape as subject matter. 'Paysage au bord de la mer', c.1948-50, is a beautifully bold piece that combines both traditional and modern influences. As a later landscape, it is structured with the premeditation and order that harks back to Cezanne and the idea that the painter has the privilege of imposing order upon nature. Derain especially liked to frame his views according to the light, when it seemed to soften the subject, evoking landscapes painted by Corot in the nineteenth century. The effect of this imposed framing is stunning in 'Paysage au bord de la mer', wherein the stark shadows and earthy tones of the foreground landscape are set against the bright light of the seascape behind. less