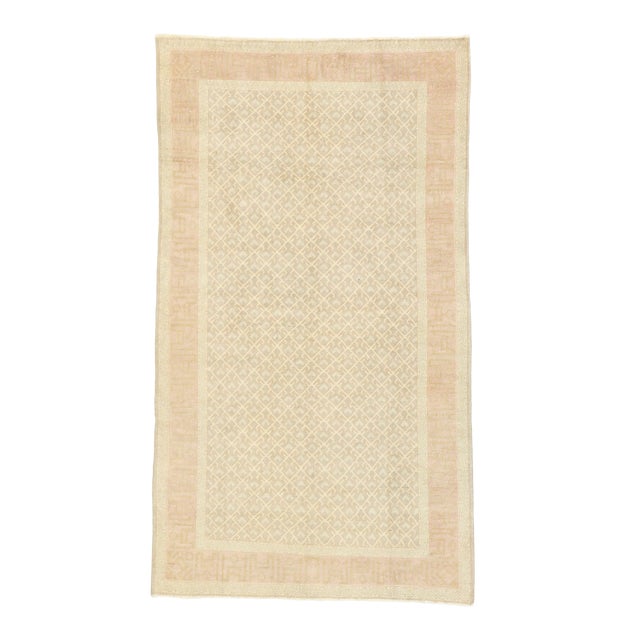 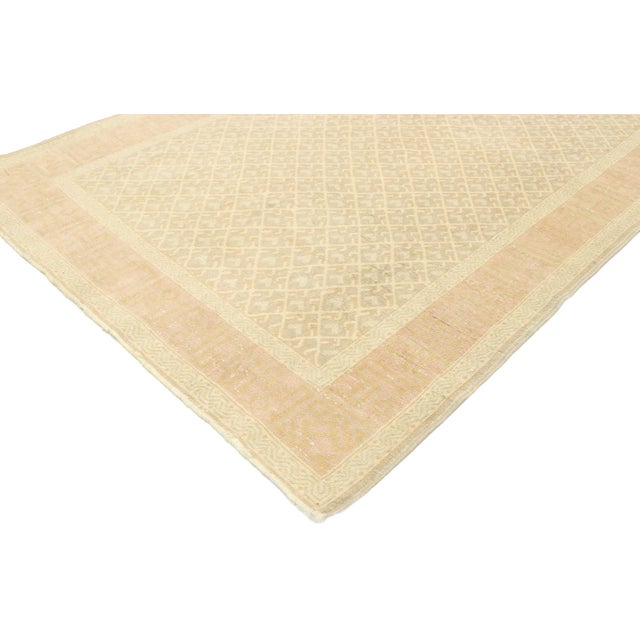 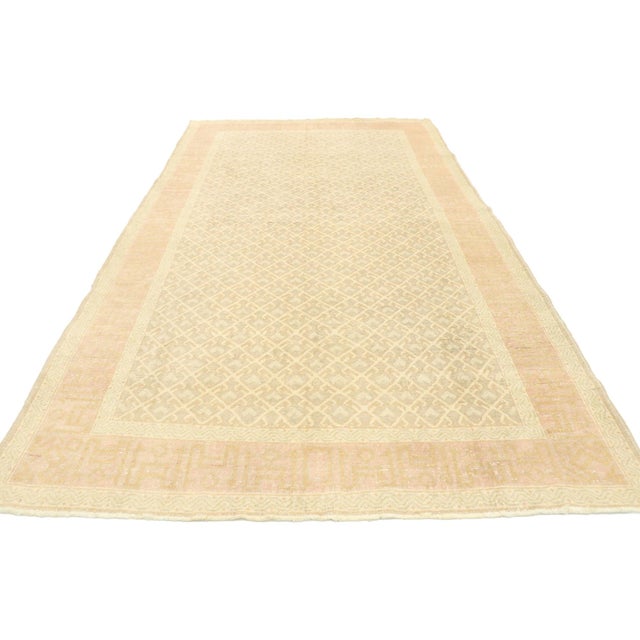 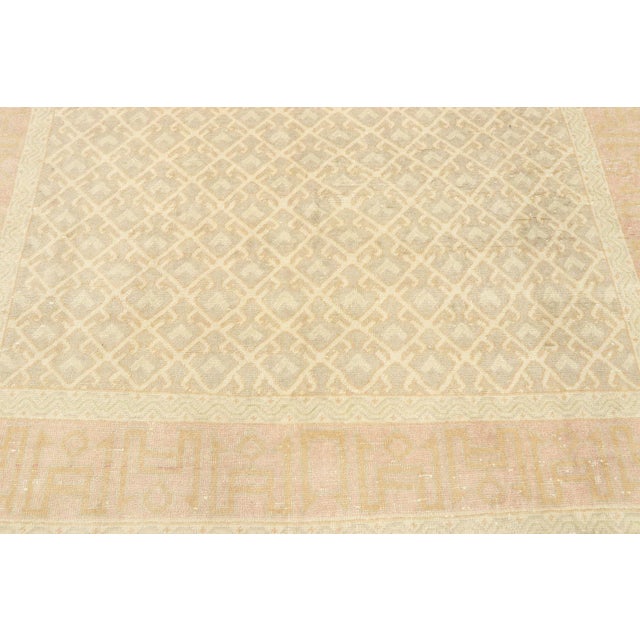 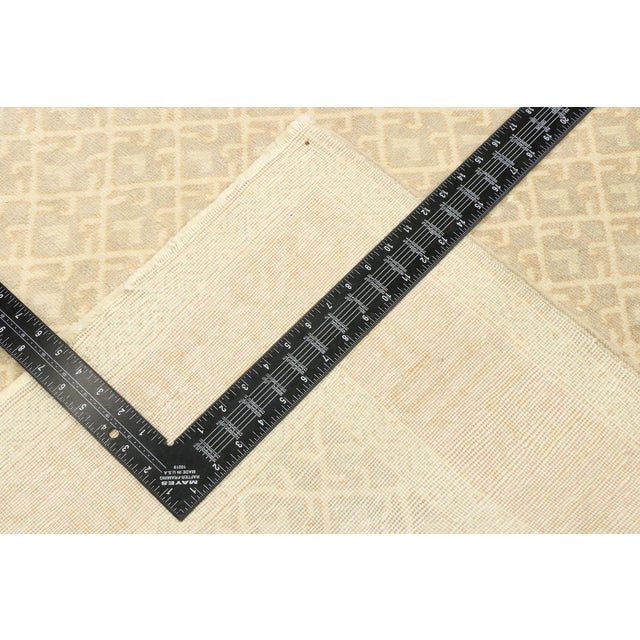 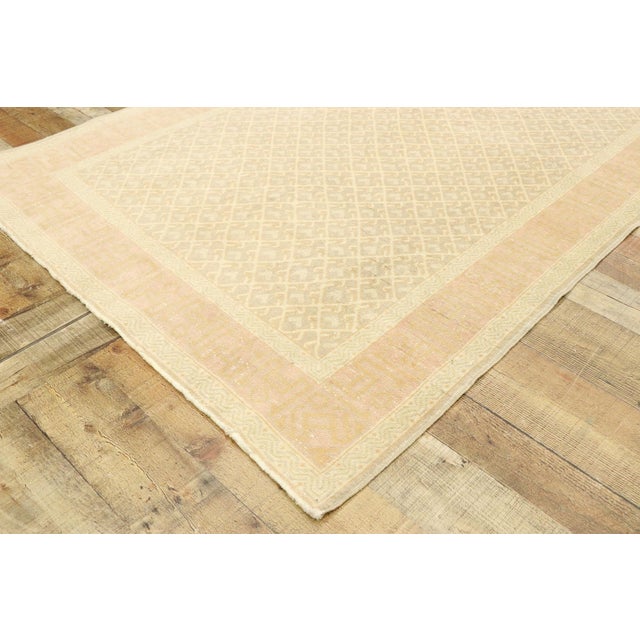 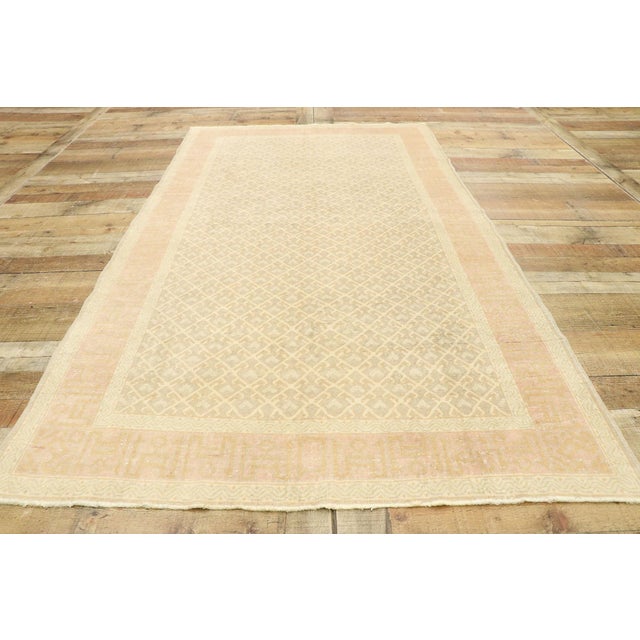 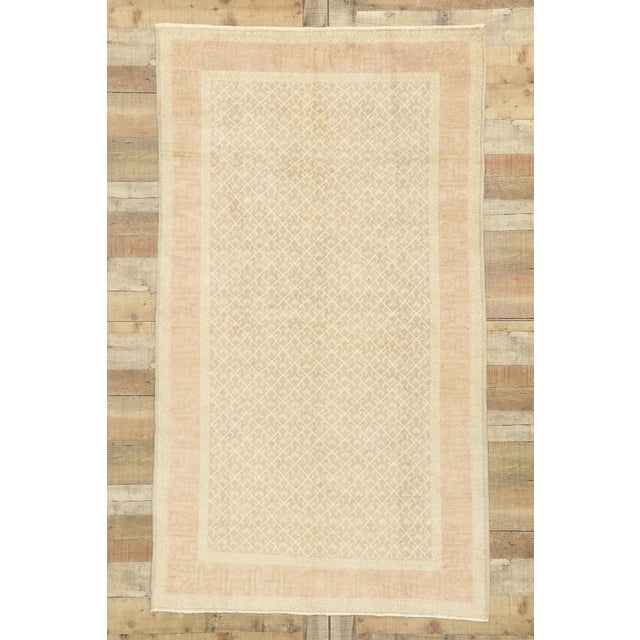 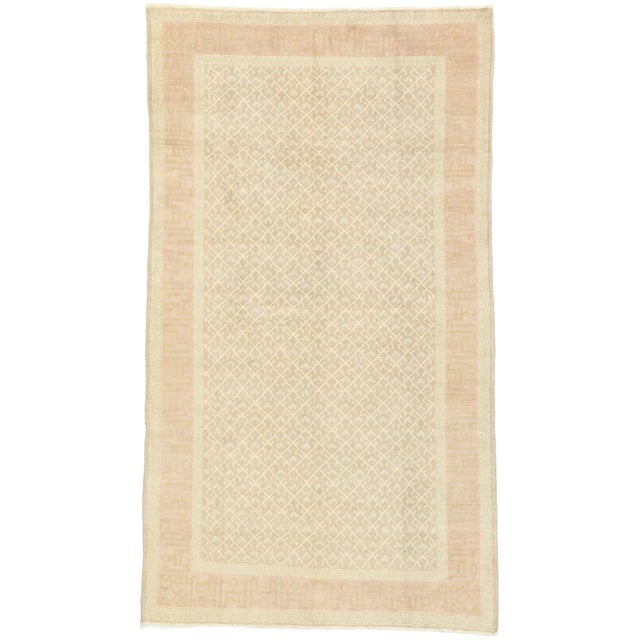 53072 vintage Turkish Sivas rug with Romantic Georgian style. With its well-balanced symmetry and hues in harmony, this hand knotted … more53072 vintage Turkish Sivas rug with Romantic Georgian style. With its well-balanced symmetry and hues in harmony, this hand knotted wool vintage Turkish Sivas rug beautifully embodies a romantic Georgian style. The lovingly time-worn composition features an all-over repeating diaper pattern highlighting its intrinsic beauty. This vintage Sivas rug closely resembles the Seljuk rug designs of the thirteenth or 14th centuries. The Seljuks, a dynasty of Oghuz Turkoman origins, ruled much of the Middle East from the eleventh to the late 13th century. In 1905, a group of carpets and fragments were discovered in a forgotten corner of the Alaeddin mosque in Konya, a city in central Anatolia that was once the capitol of the Seljuk Empire. Referred to by rug scholars as either the “Seljuk Carpets” or “Konya Carpets,” the carpets found in the mosque are among the oldest surviving hand knotted rugs known to exist. Drawing inspiration from the fantastic discoveries in Konya, the designs of this vintage Sivas rug are largely based on these ancient carpet fragments. The attractive diaper pattern, comprised of repeating offset rows of hexagons with hooked designs, dominates the field while also mimicking the motifs of the main border, which consists of a large-scale design of opposing animal heads. The wide main border is flanked by an inner and outer wave scroll guard border. As with the Konya carpets, the striking play of pattern and scale imbues this vintage Turkish rug with immense visual interest and graphic appeal. Perfect for a hallway, stair landing, open hall or long entry, kitchen, corridor, private library, den, mudroom, study, home office, sitting room, bathroom, grand foyer and designer entryway, or it would make a lovely accent to a great room, wine cellar, executive suite, conservatory, state room, royal suite, living room, bedroom, hotel lobby, billiards room, or clubhouse. It would make a lovely accent next to a buffet in a dining room, behind the sofa table in the living room, or by a long vestibule in a hotel lobby. Well-suited for a variety of interior styles: Georgian, Renaissance, Baroque, French Provincial, Neoclassical, English Country, Regency, Directoire, Empire, Rustic Romantic, Feminine Industrial, Artisan, Lodge, Cottage, European, English Country, Modern, Eclectic, boho chic, Bohemian, and Traditional. Desirable Age Wear. Abrash. Hand knotted wool. Made in Turkey. Measures: 04'00 x 07'00. less