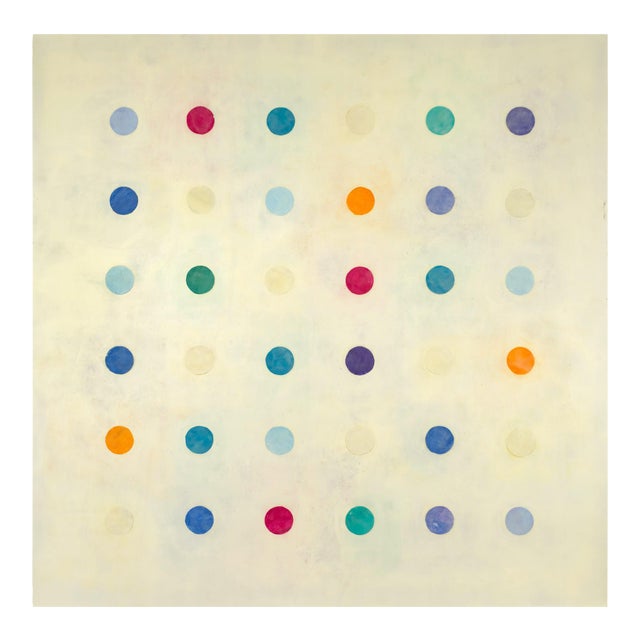 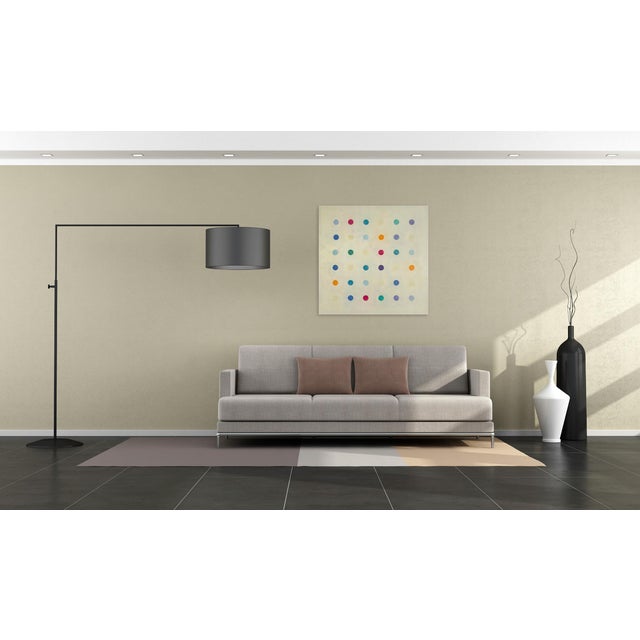 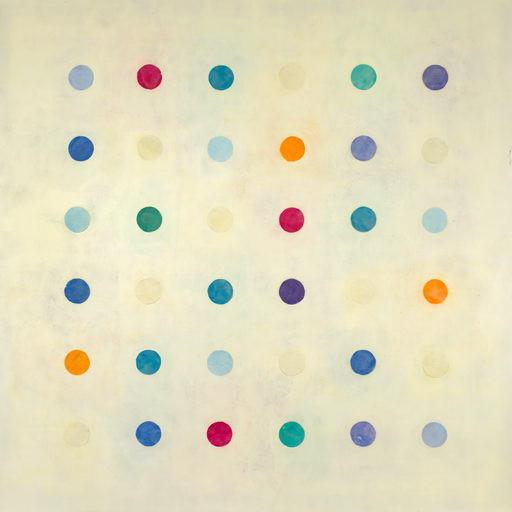 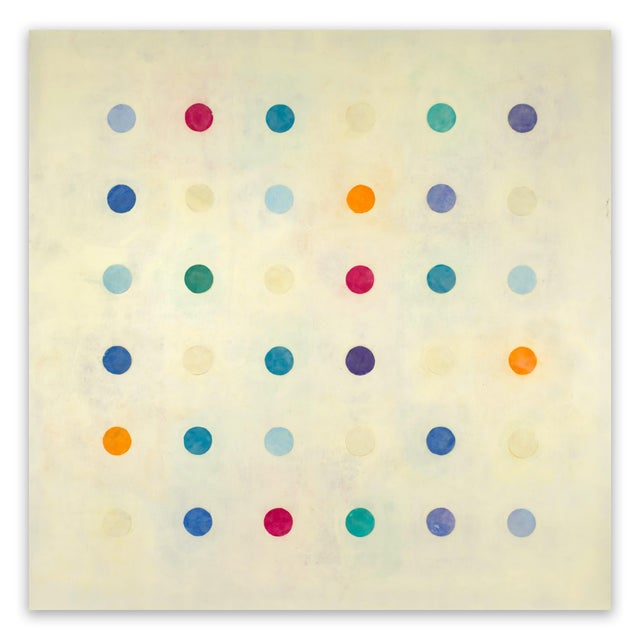 This painting is part of a series titled (r)evolution ... morePigmented beeswax, oil and collage on wood panel

This painting is part of a series titled (r)evolution made between2014 and 2015. It is the second iteration of a series ofdot paintings begun in 2006.This process-based series was inspired by Adamsongoing interest in music and music theory. It is about pattern, rhythm, and intervals of notes as exemplified by the choice and placement of color.Adams hasbeen intrigued by math and serial systems since herdays of graduate school at New England Conservatory (Boston, Massachusetts) when John Cage was composer in residence at Harvard University.For this series, she haspainted with many layers of encaustic and mounted hand cut circles of Japanese paper which have been dipped in encaustic.Finally, each dot/circle is covered with clear encaustic medium, then painted with oil to create spatial depth.

Tracey Adams is an American abstract painter and printmaker. Her artworks reflect a strong interest in musical patterns, rhythms, lyrical compositional elements and what she calls a sense of performance. She lives and works in Carmel, California. Adams earned her BA from Mount St. Mary's College in Los Angeles in 1978. She studied printmaking and painting at the School of the Museum of Fine Arts in Boston from 1979 to 1981, and earned her Master's Degree from the New England Conservatory of Music in 1980. She has received several fellowships and grants, including the Pollock-Krasner Foundation Grant in 2015, a grant from the US Department of State and the Ministry of Culture, and a Vermont Studio Center Fellowship. Adams works on panel and paper, using a mixture of paint, encaustic and graphite as well as elements of monotype and collage. Planning and intuition equally inform her process. Often, she will begin a work or a series from the perspective of an exact mathematical formula, planning compositional elements in advance. Other times she will begin with a grid structure then work within that structure, incorporating organic, performative gestures and expressive brushwork. Regardless where a particular work begins, Adams engages in an open, exploratory process that allows the work to evolve. Often the finished result is a mixture of her original idea and her instinct, creating a composition that captures the essence of the harmony of mind and emotion. Her background in music is what most inspires Tracey Adams. Her works draw heavily on musical structure, rhythm and composition. Her color choices speak to her personal surroundings living on a peninsula near Monterrey in central California. The light off of the water, the muting capacity of the fog, the colors of the setting sun and the palette of the lush local flora all find their way into her work. While a graduate student, Adams was able to work often with the composer and artist John Cage, who profoundly influenced her progress. She has said that her work strives to capture the calmness and beauty of an environment she would like to be in herself.I live near the Pacific ocean and walk along the beach everyday - all the beautiful limb-like forms of seaweed and algae find their way into my work as do the colors of the water, sky and tree forms. I work on a continuum of organic gesture to geometry. They represent two distinct, but very real sides of who I am. My mind is very organized;while at the same time, I love to draw in an unrestricted and intuitive way with lots of physical movement. The challenge comes in trying to merge both cohesively. Adams has exhibited extensively in solo and group shows throughout the United States and occasionally in Europe. Work by Adams is part of the permanent collections of several museums, including the Bakersfield Art Museum, the Monterey Museum of Art, the Fresno Art Museum, the Tucson Art Museum, and the Santa Barbara Museum of Art. Her work is also part of multiple corporate collections, including those of Adobe Systems, AT&T Corporate Headquarters, Hallmark Corporate Headquarters, Sony Corporation, and Intel. Kathryn Markel Fine Arts, NYWinfield Gallery, Carmel, CABryant Street Gallery, Palo Alto, CAM.A. Doran Gallery, Tulsa, OKPatricia Rovzar Gallery, Seattle, WAAnne Loucks Gallery, Glencoe, ILAnn Connelly Fine Art, Baton Rouge, LA less