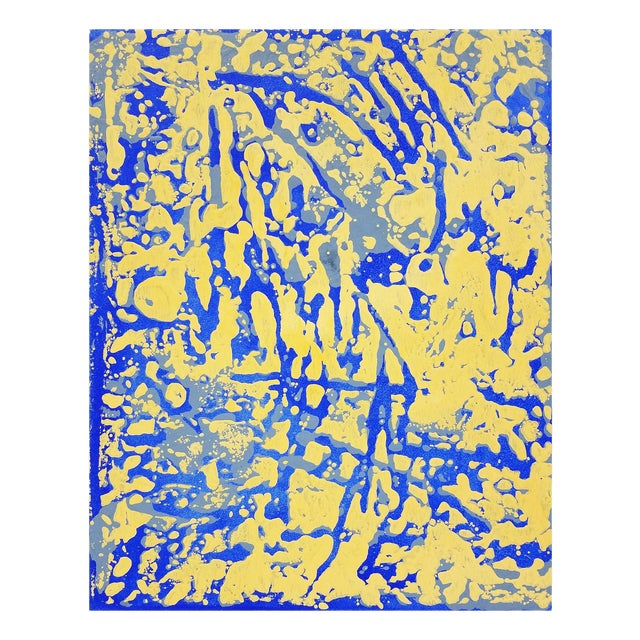 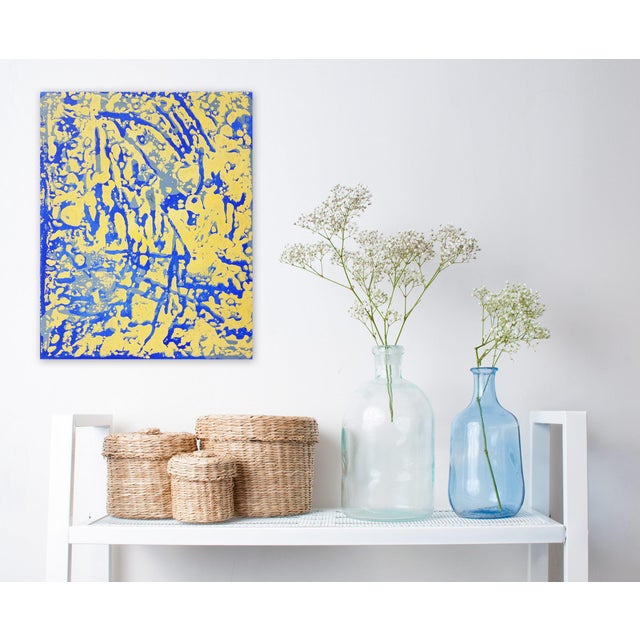 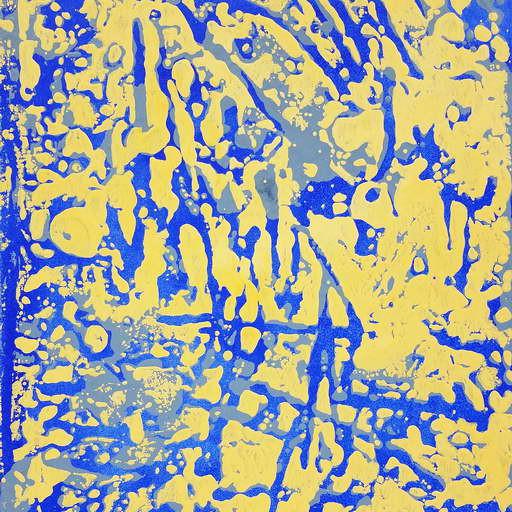 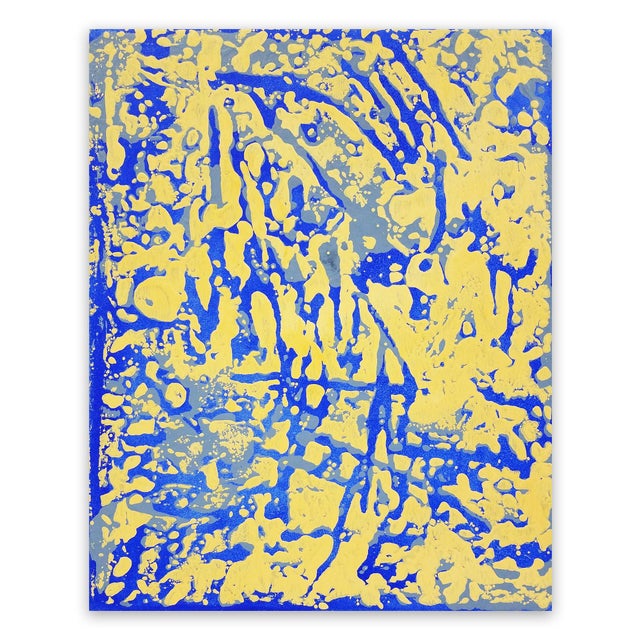 In a process closely akin to relief printmaking, Maine uses textured surfaces to apply fluid acrylic paint indirectly to prepared canvas. He makes these surfaces or plates, some of which are quite large, out of common materials such as plywood, extruded foam, plastic and glue.Integral to the process is the idea that the entire surface is treated with paint at the same moment. For Maine that means compositional phenomena are allowed to occur with minimal interference from his ego.For this painting, Maine wanted a juicy, fluid surface that would seem to envelop the stick-like marks (which are made via gouges in the plate).Here again, he is reversing the usual print protocol by working from dark to light colors.

Stephen Maine is an American abstract painter, writer, curator and teacher. He is a member of the American Abstract Artists and a contributing editor at Artcritical.com. His paintings engage and extend contemporary ideas about color, composition, surface and process. He lives and works in Brooklyn, NY. Maine attended the Rhode Island School of Design, Hartford Art School, the University of Connecticut School of Fine Arts and the Yale Summer School of Music and Art before receiving his BFA in Painting from Indiana University, Bloomington, in 1982. He received his MFA in Visual Art from the Vermont College of Fine Arts in 2014. From 2006 to 2016 he taught in the MFA Fine Arts program at the School of Visual Arts in New York. He currently teaches at the Parsons School of Design and at the State University of New York at Purchase. In a process closely akin to relief printmaking, Maine uses textured surfaces to apply fluid acrylic paint indirectly to prepared canvas. He makes these surfaces or plates, some of which are quite large, out of common materials such as plywood, extruded foam, plastic and glue. Maine rolls or brushes wet paint over the plate and presses it into the canvas, using custom built contraptions to ensure alignment (registration) of successive applications. Integral to the process is the idea that the entire surface is treated with paint at the same moment. For Maine that means compositional phenomena are allowed to occur with minimal interference from his ego. This approach to composition is productively at odds with his color decisions, which are closely calibrated. Sometimes a single paint application, in concert with the field of color that is the ground, is sufficient to yield a visually engaging result. In most cases, however, to complete an image multiple layers and more complex interactions of hues are called for. The entire process balances precision and unpredictability. Color itself, and the material properties of paint as embodied color, provide Maine with his primary inspiration. His open-ended and intentionally imprecise production methods yield results that cannot accurately be foreseen, and he delights in the element of surprise they bring to his studio activity. He is inspired by the aleatoric elements of his process, which allows his materials and surfaces to collaborate in the creative act rather than be scrutinized and dominated by the artist. Says Maine; "This work has provided me with a concrete way to think about compositionally, seriality, improvisation, presentation, and the psychology of visual perception." In a 2015 article in The Brooklyn Rail, artist and writer Tom McGlynn described the work of Stephen Maine as follows: Maine has an obvious formal control over his palette, due to a long-standing investigation of color, translucency, and the influence of color on the virtually shifting tectonics of painting space ; This is a key to his practice. Color can directly engage the physiological mechanism of the eye while simultaneously initiating a string of associative logic in ones random memory, and Maines paintings approach a critical boiling point at the admixture of optical reaction and the accidental, yet uncannily recognizable gesture. Work by Maine is included in the permanent collections of several important institutions, including that of the Metropolitan Museum of Art, the New York Public Library, the Museum of Modern Art Library Special Collection, the Whitney Museum of Art, Frances Mulhall Achilles Library, the Cleveland Museum of Art and the Yale University Art Galleries, as well as the United States Department of State Art in Embassies Collection. Stephen Maine has exhibited extensively. His work has been featured in numerous solo exhibitions in New York, and group exhibitions throughout the United States as well as in Europe and Mexico. Hionas Gallery, New YorkCounty Gallery, Palm Beach less