The Ghost Chair—paranormal-inspired pastiche, or one of the most iconic chair designs of the 21st century? Since 2002, Philippe Starck’s fantastical phantom seat has been proving itself firmly the latter. Fashioned from a single piece of transparent plastic, the Ghost Chair is visually striking, yet at the same time hardly there, making it a priceless asset in apartments with steadily shrinking square footage. Possessing the unique ability to be layered, a Ghost Chair can roost just about anywhere.

Officially dubbed the Louis Ghost Chair, Starck’s seat takes its name from the stately style put into play by King Louis XVI and his bride Marie Antoinette. During the duo’s reign, a renewed interest in classical Greek and Roman design developed. The fascination manifested itself in architectural elements, such as fluted table legs, fauteil chair backs, and embellishments like the la pomme de pin (a spire styled after a pinecone) and la guirlande (a sort of one-sided swag). In particular, a chair with a rectangular or round upholstered back, clean lines, column-like carved legs, and an exposed wood frame—had staying power, eventually earning the name of the monarch, becoming known as the Louis XVI Chair. This formal upholstered chair remains one of the most popular chair designs to this day, and is a timeless classic. 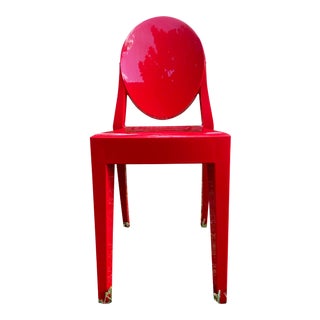 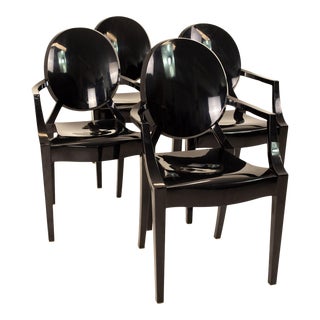 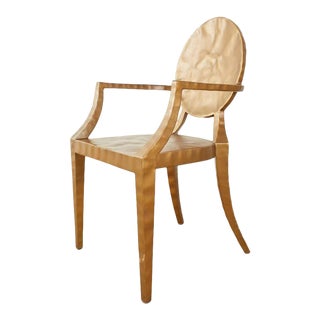 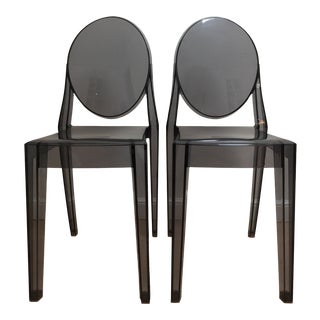 Since its inception the Louis XVI chair has seen all manner of designer interpretations, but traditionally all iterations have relied on some kind of upholstery and wood construction. However, a French designer by the name of Philippe Starck had something else in mind. Born in 1949, Starck, a school dropout, kick-started his career by designing a pair of nightclub interiors in Paris in the 1970s, a time when using Lucite for furniture and décor was all the rage. The Frenchman has since become one of the world’s most acclaimed designers, known for his subversive and uncanny approach to design. The Philippe Starck Ghost Chair is a perfect example of that signature style…

Leave it to Starck to turn royal style on its head. In 2002, Starck reinvented the classic Louis XVI armchair for Italian design company Kartell, which is renowned for its innovative use of plastics. The designer distilled the antique furniture piece down into one silhouette, translating its round, medallion-shaped backrest, curved arms, and straight legs into a single clear plastic chair. Calling upon not only the reign of Louis XVI, but on ancient Greek geometry, the chair was prankish and playful but also a post-modern triumph. As Starck himself said, the chair “has a mix of materials and styles based on our shared memories. We all own this piece in a way.” Needless to stay, the Louis Ghost Chair was an instant success.

One of the most magnificent features of the Ghost Chair is not immediately apparent to the eye—it’s how it’s made. The iconic chair required significant technical innovation to come to life, as it’s made of a transparent injection-molded polycarbonate, which uses a single mold. This means that the entire chair is a single piece—no screws, upholstery, or separate arms and legs. Because it’s plastic, and because there are no joints (which could freeze or crack in the rain or cold), the Ghost Chair performs particularly well outdoors, making it a go-to for elevated outdoor venues.

A far cry from its stuffy (and heavy) ancestral armchair, the Louis Ghost Chair is also remarkably lightweight, and easy to lift and move around. Better yet, it’s stackable (up to six chairs high).

The Legacy of the Ghost Chair

Twenty years after its release, the Ghost Chair remains an omnipresent fixture in interiors. To complement the Ghost Chair, Starck and Kartell have also released coordinating pieces: the Victoria Ghost Chair (an armless acrylic side chair), One More Counter Stool and Barstool (an acrylic armless counter and bar stool, respectively), and the Charles Ghost Stool (a transparent backless stool). Additionally, the Ghost Chair has been recast in a rainbow of colored acrylics, as well as glossy black and white matte. The Ghost Chair has even been released in a miniature size, “Lou Lou Ghost,”—because kids need designer furniture, too!

Beyond Starck’s own purview, we’ve seen the Ghost Chair influence countless other contemporary designs. There are, of course, the straightforward knockoffs, but numerous contemporary designers and furniture makers have debuted compelling, elegant, and playful Ghost “inspired” Lucite chair and furniture designs. The chair’s visual lightness and its ability to fade into the background have made it a clever and chic remedy for small spaces where visual clutter collects quickly.

Making the Louis Ghost Your Own

While it’s true the Ghost Chair is a statement piece, hosting the ghost chair in your own home is easier than you might think. Because the Ghost Chair straddles both traditional and contemporary design—thanks to its classic silhouette and modern material—the Ghost Chair possesses a virtually unmatched design mutability. Designers love the Ghost Chair for the way in which it supersedes time and place, nesting into Brooklyn Brownstones just as seamlessly (some might say literally) as ultra-modern penthouses.

Ghost chairs can serve a very functional purpose as well. Unlike traditional dining chairs, Ghost Chairs don’t mask a dining table’s base, making them ideal for tables with sculptural pedestal bases or legs. The same goes for textiles like pillows or sheepskins. Placed atop a Ghost Chair’s seat, textiles appear to float, offering up a jovial trompe l’oeil effect.

Apartments and rooms with a hemmed-in footprint can also make wise use of a Ghost Chair. In a studio apartment, double ghost chairs floated opposite the foot of a bed can create a seating area that doesn’t look visually cramped—even if it is.

Though some designers and industry insiders feel that the Ghost Chair has passed its prime, we’re confident this iconic chair is not going anywhere. Sneak it in somewhere… a ghost is spookiest when it’s least expected. 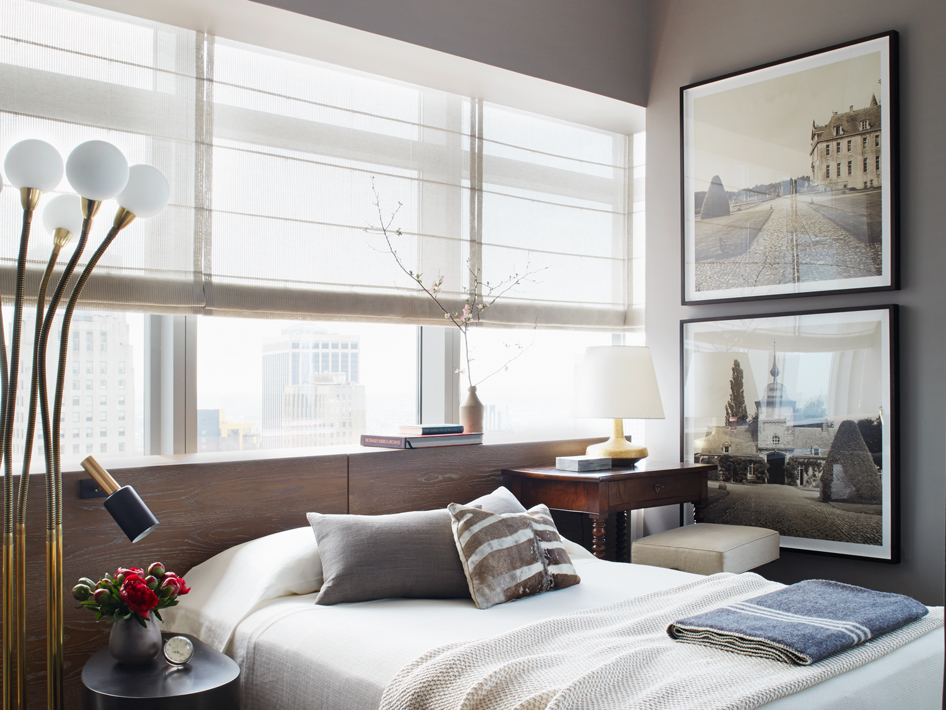 Decorators have long heralded the pacifying powers of paint, so to... Read More 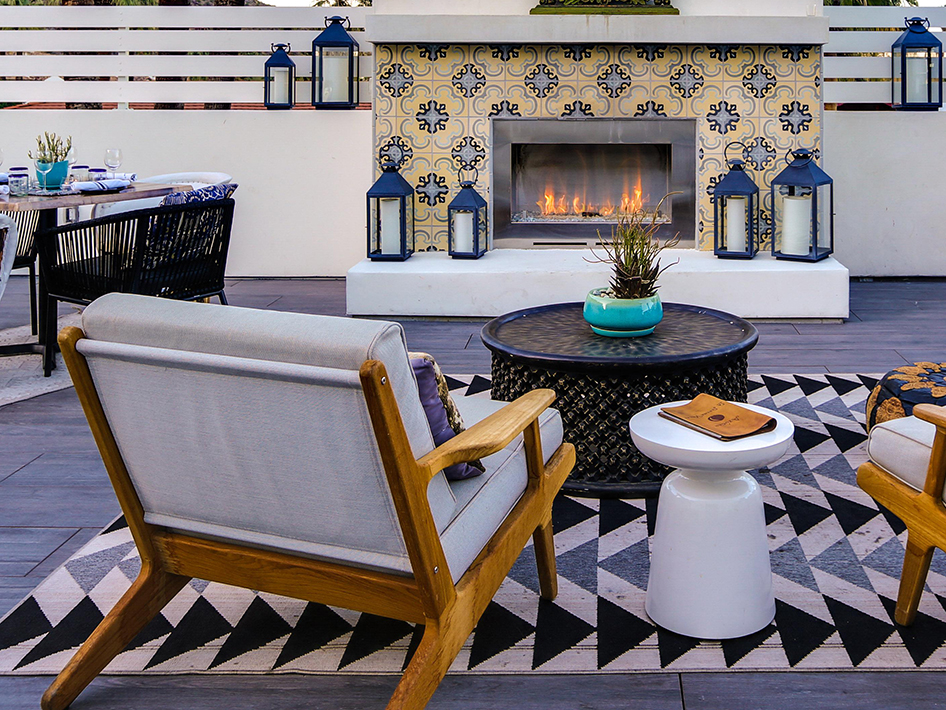 The 2021 Outdoor Showcase is Here

We don’t know about you, but… we can’t wait to get back outside.... Read More 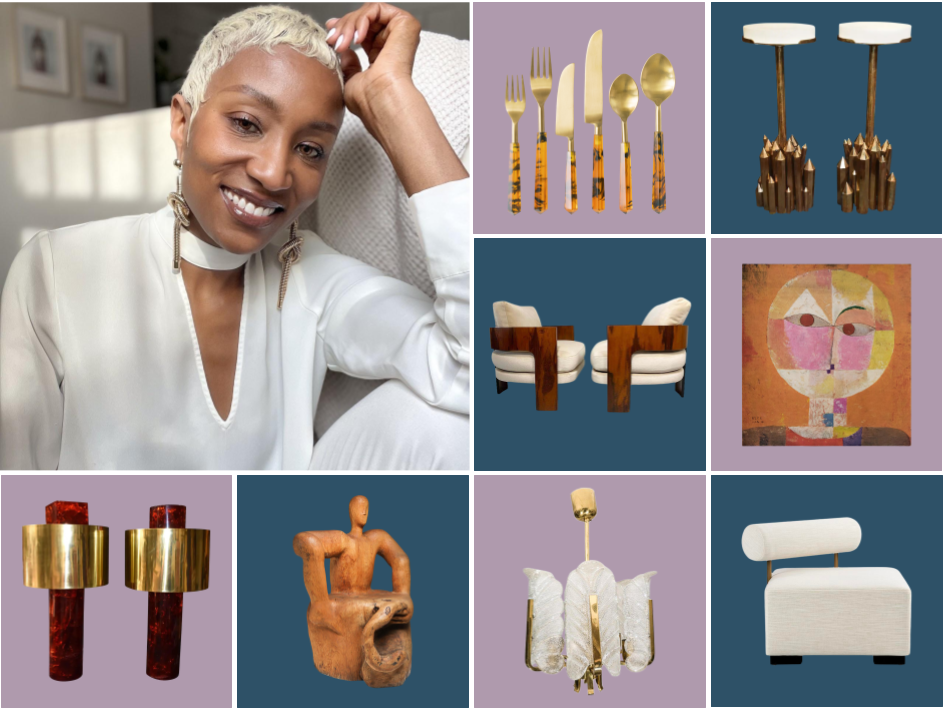 Kim White is Enhancing the Beauty in Her New Home 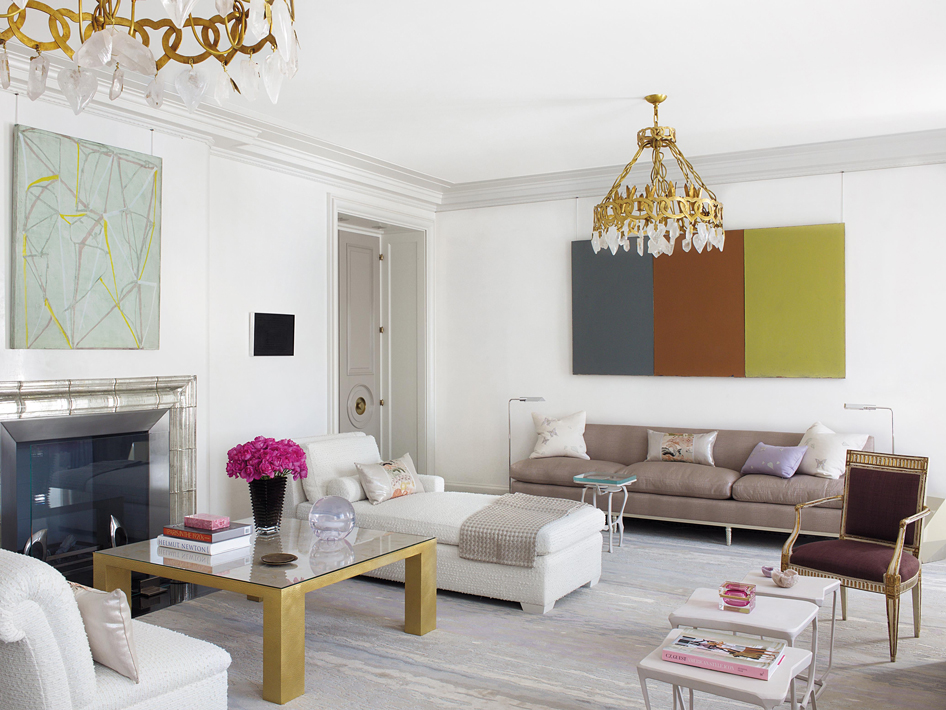 Shining a Light on Your Chandelier Style

In truth, there are few who shouldn’t consider a chandelier for... Read More 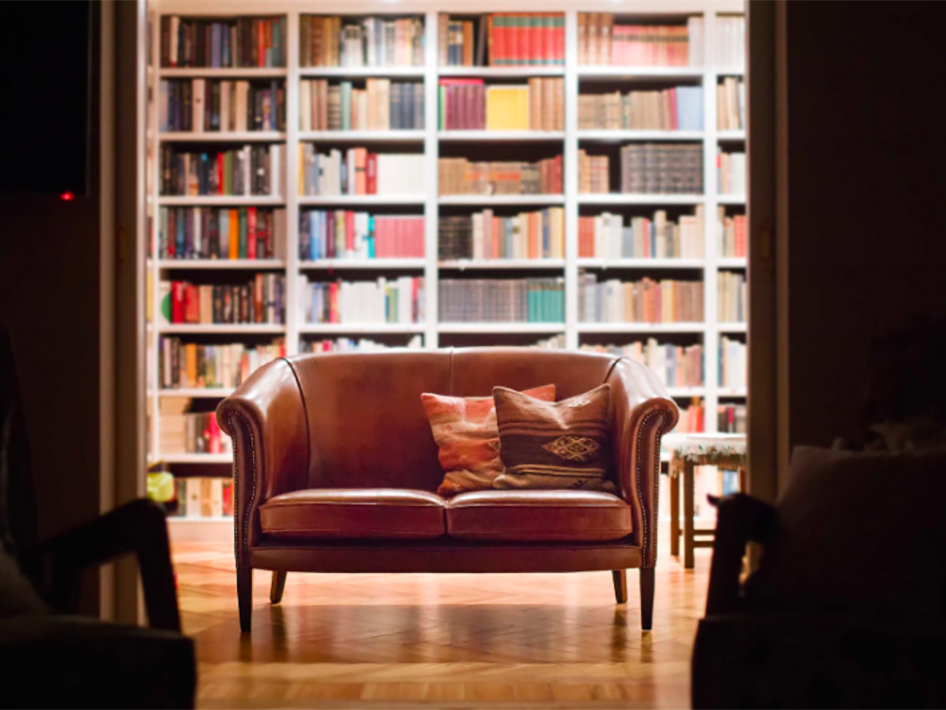 The Chairish Podcast Ep. 30: What Does a Market Editor Do?

Long before there were social media influencers, the market editors at... Read More 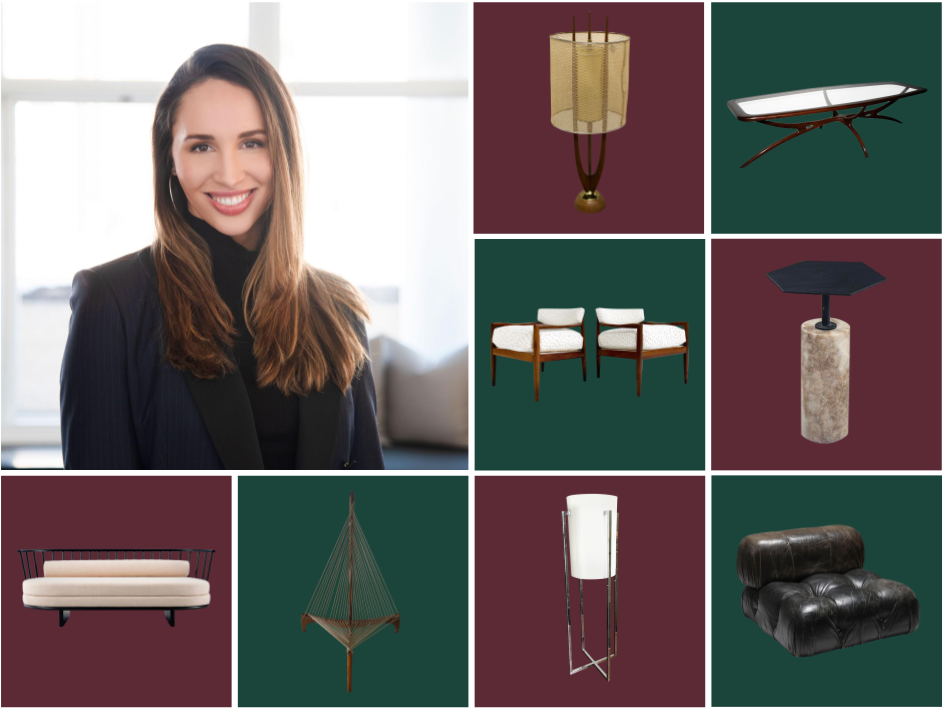 Amalia Graziani is Exceptional in Her Industry