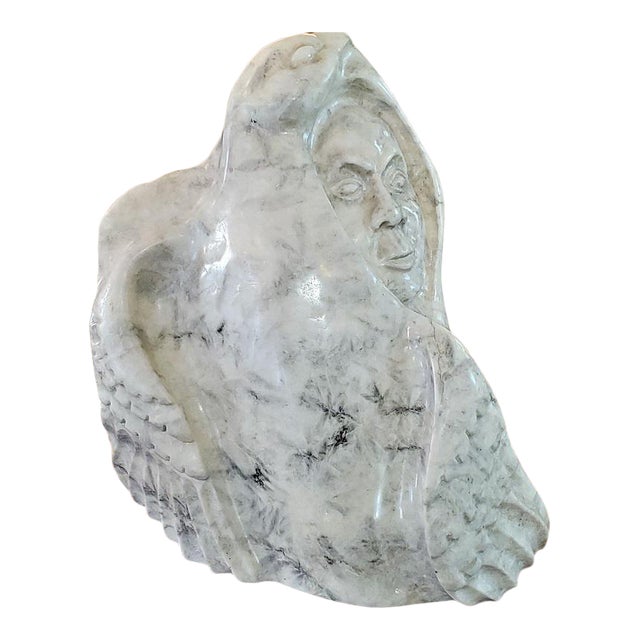 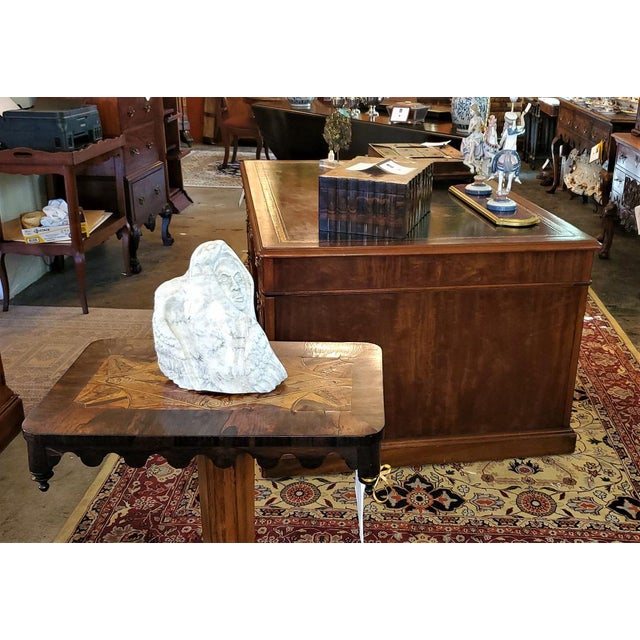 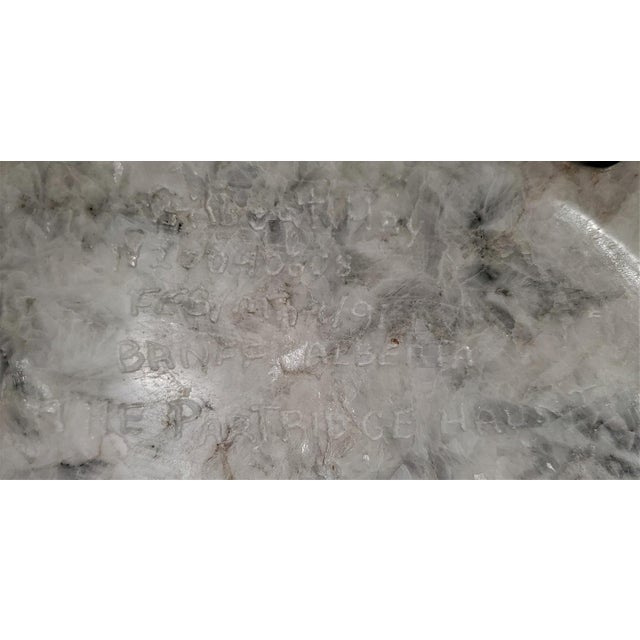 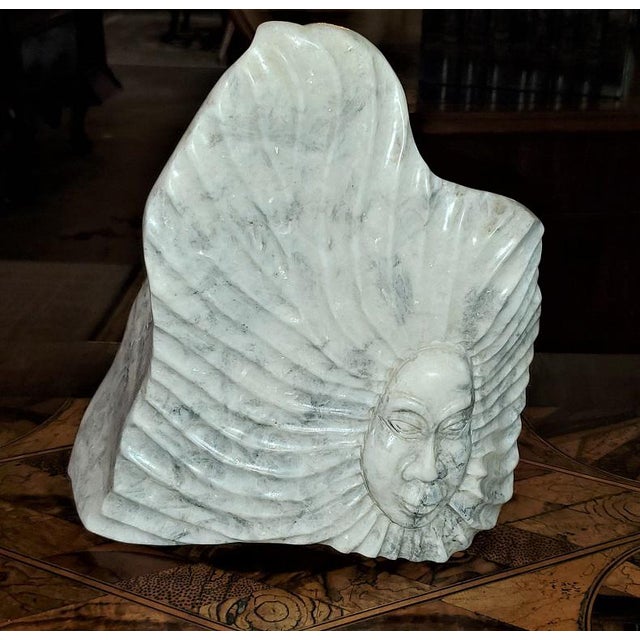 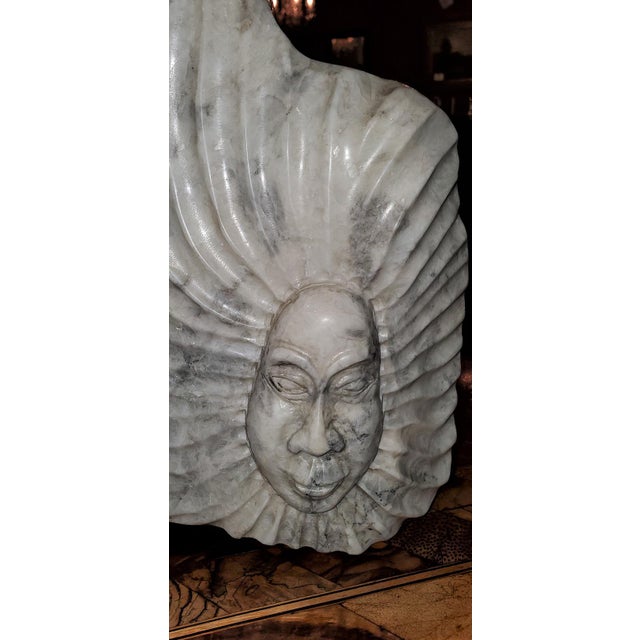 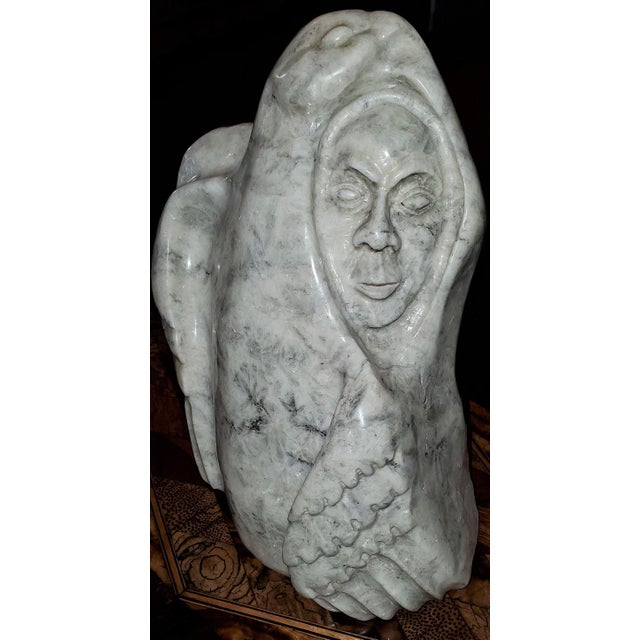 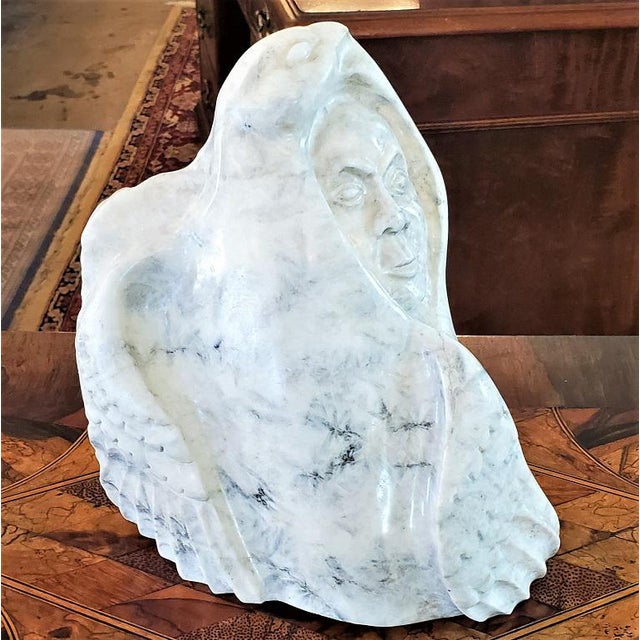 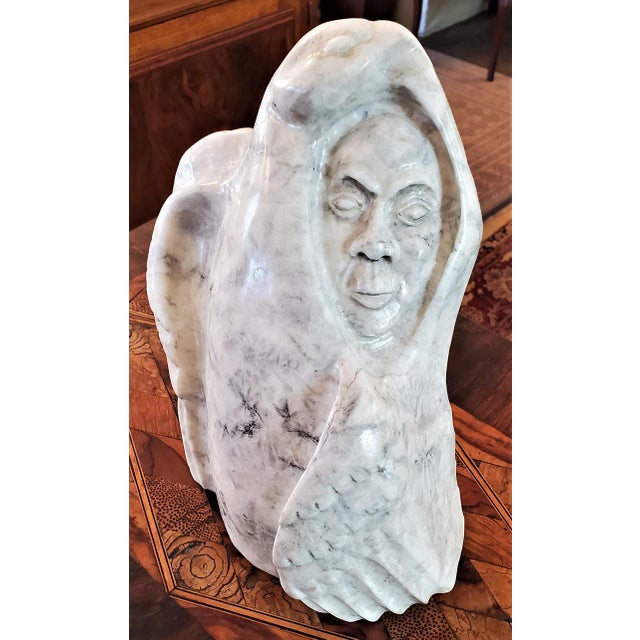 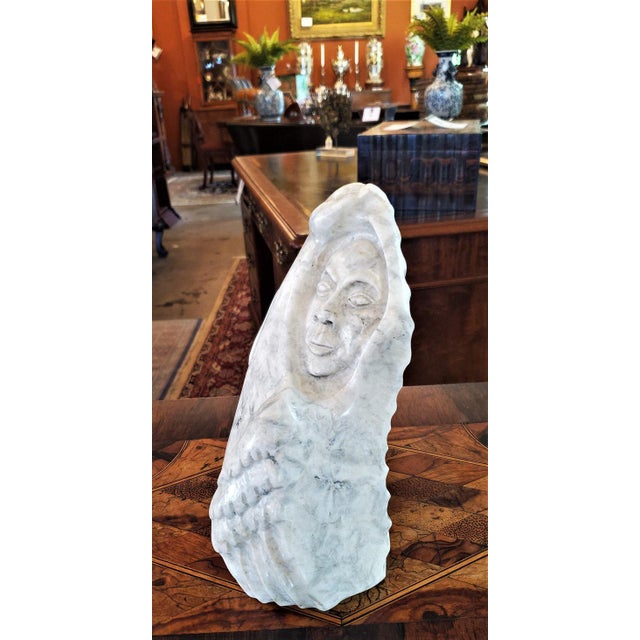 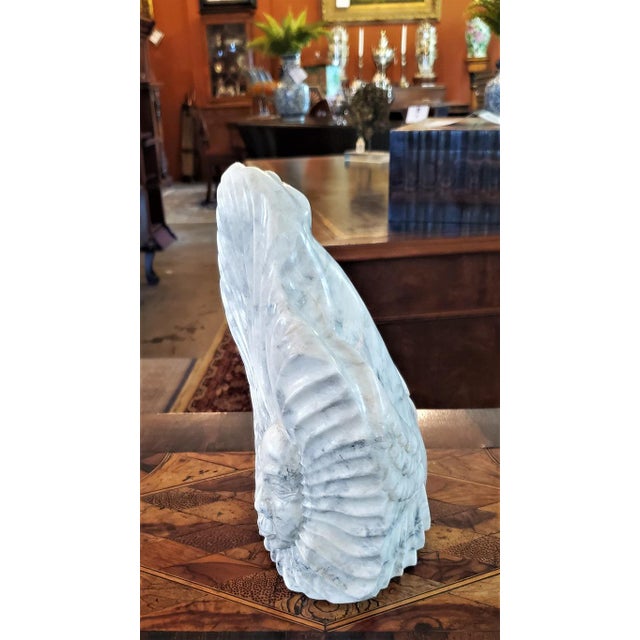 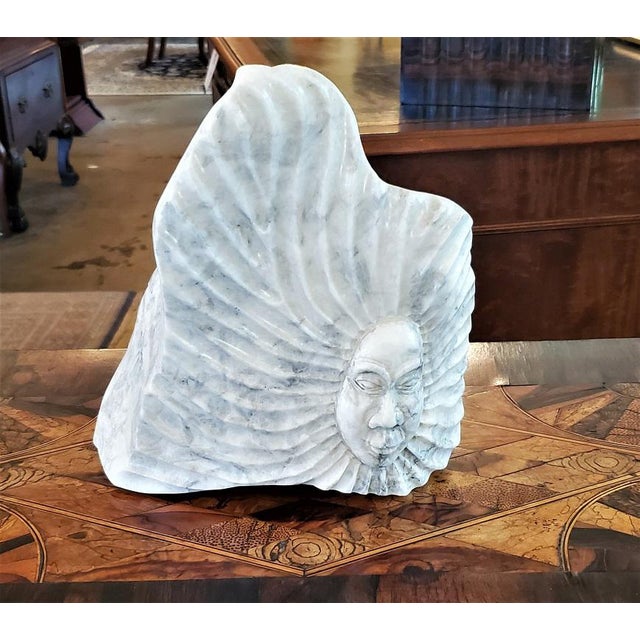 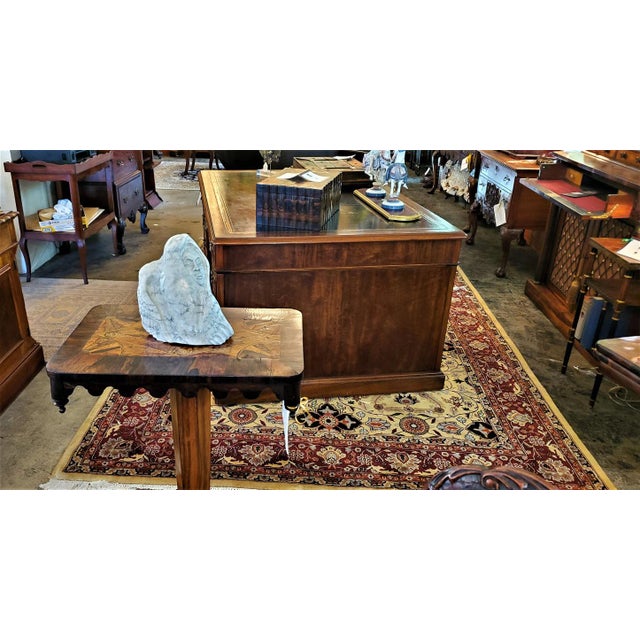 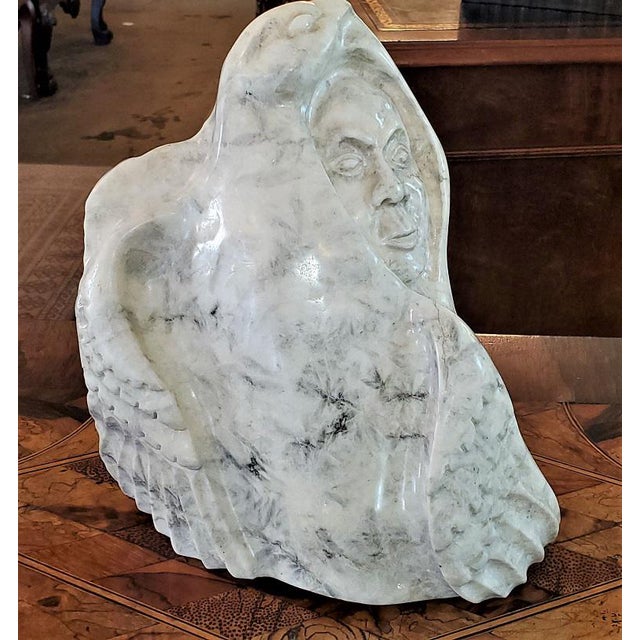 Fully and properly marked on the base:

This stone sculpture is carved from dolomite marble, a stone that is not commonly used by the artist, making it even more desirable. He is more commonly associated with carvings in soapstone and anorthosite. The stone used for this sculpture, we feel, reflects the location where it was carved, namely, Branff, Alberta.

The subject matter is FANTASTIC with the front depicting a Partridge Bird with it’s wings extended behind it and a ‘ghostly’ and hooded, Inuit face to the right under the bird’s head. On the rear of the sculpture you again have a carved Inuit face with flowing starburst patterns extending outwards. (we feel that it is a replication of hooded fur blowing in the wind).

It is a simply STUNNING carving of EXCEPTIONAL QUALITY !
This is a TRULY UNIQUE sculpture !
Made in February/March 1991. This date is very important for reasons you will see later in this posting.

Provenance: It was acquired by a former New York Art Dealer for her Private Collection from a Wealthy Dallas Estate circa 15 years ago. It has always been in private possession since made and is brand new and FRESH to the market.

GILBERT HAY: BIO:
Gilbert Hay is a sculptor and printmaker working in Nain, Nunatsiavut, NL. Hay is a prodigious maker besides carving, and has worked in goldsmithing, silk-screening, sewing, jewelry and lithography. Hay prefers carving anorthosite, which he gathers from the nearby quarry at Ten Mile Bay [1], but he will carve any suitable material, from antlers to whalebone to marble, and always starts his creations by examining his chosen material and letting its shape and characteristics dictate the subject matter [2].

Hay began drawing at age ten, and started to carve during his twenties while living in Edmonton and pursuing vocational training [3]. Hay traveled widely across North America as a young man, and his experiences of other cultures fostered a heightened affinity for his own. On his return to Nain in 1974, he strove to preserve Inuit culture and modes of living, and learned to sew from his mother and began making traditional kamiik (boots)and other garments to keep traditional modes of making alive [4]. In March 1991, he received a scholarship from the Banff Centre for the Arts to participate in a five-week session which had a profound impact on his practice. It was here that he created Natural Gas, one of his most famous works.

Hay’s works are marked by a tension between ‘accepted’ modes of Inuit art-making and the more abstract style Hay wants to explore [5] His hand-held sculptures may initially resemble traditional Inuit art, what Hay calls politically safe “memory art” [6], but they are rife with commentary on the political realities of the North; they are at the same time wryly humourous, and laser-focused on colonialism. Hay will often use environmental landscape markers like inuksuit to contrast Inuit and European symbolism, and comment on the early colonial attempts to remove them (and symbolically Inuit) from the landscape [7]. The upside-down Inuk holding an egg in Hay’s Natural Gas (1991), for example,speaks to the displacement of Inuit ownership over natural resources and the fragility of their traditional lifestyle within the context of the Nunatsiavut land claims agreement, which was under negotiation at the time of Natural Gas’s creation.

Hay’s influence stretches far over his community and the Nunatsiavut artscape. He is considered the first Inuk from Labrador to experiment with printmaking, and he has exhibited nationally and internationally, including four times at The Rooms Provincial Art Gallery in St John’s. Notably, his massive, one-ton commissioned serpentine soap-stone sculpture, Nuikkusemajak, has decorated the lobby of the Confederation Building in St John’s since 1985. He has also dedicated much of his time to artistic pedagogy and development in his community by establishing a community craft centre in Nain with longtime collaborator William Ritche in 1976, and serving on the board of the Inuit Art Foundation for many years.

1979 – Received Newfoundland and Labrador Arts Council grant for continuation of art
1985 – Completed his one-ton serpentine sculpture Nuikkusemajak (“Has visited”) for the Confederation Building annex in St Johns
1990 – Became a member of the Inuit Art Foundation Board of Directors.
EXHIBITIONS
View All Exhibitions and Details

You will NOTE from his Bio, that in March 1991, whilst at Banff the Artist created his most notable and famous work, ‘Natural Gas’, he ALSO created this piece at that time, making it even MORE IMPORTANT as it was made during his most inspirational period !