Discover Designers
Are you an interior designer?  Join our trade program to enjoy exclusive benefits!Join the trade

"The Four Horsemen of the Apocalypse" Bronze Sculpture by Lee Oscar Lawrie (German/American, 1877-1963) 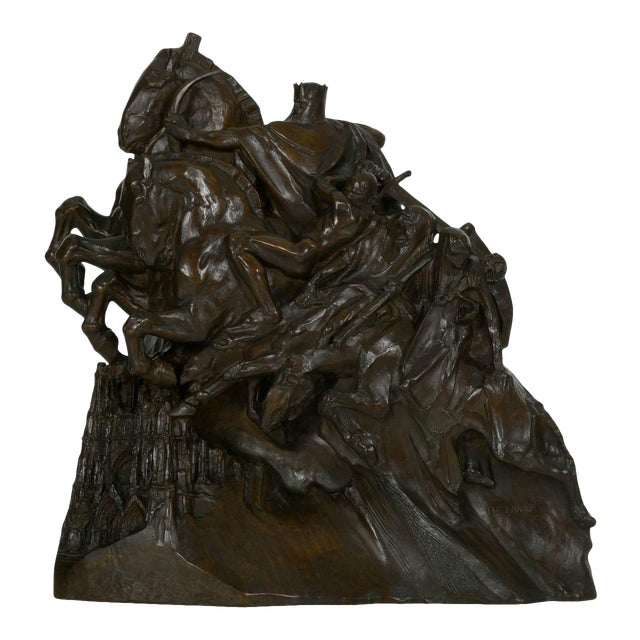 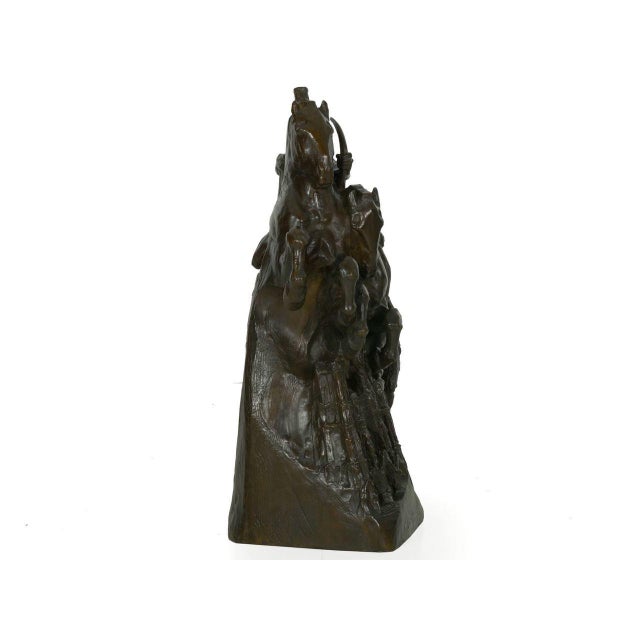 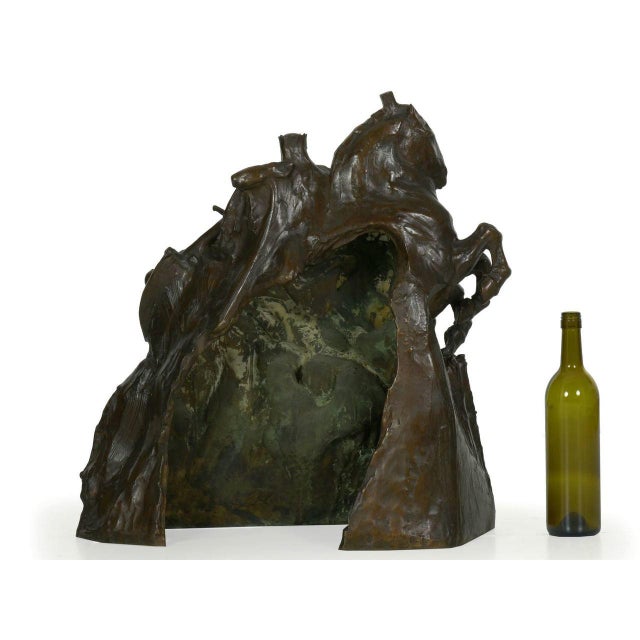 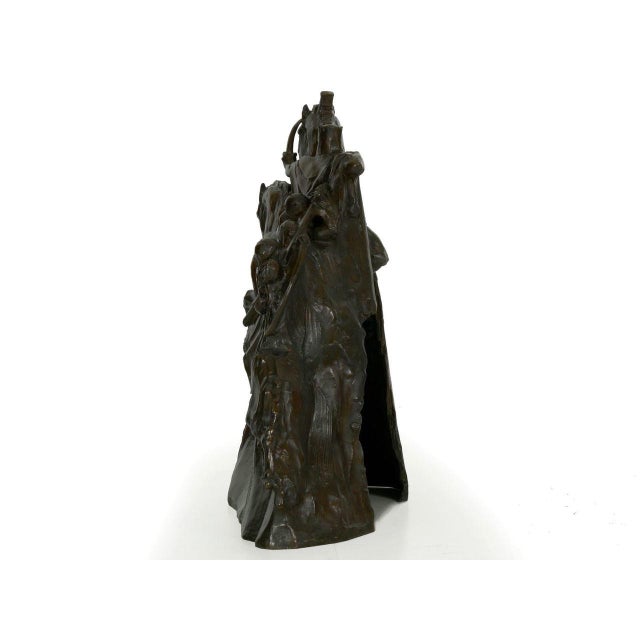 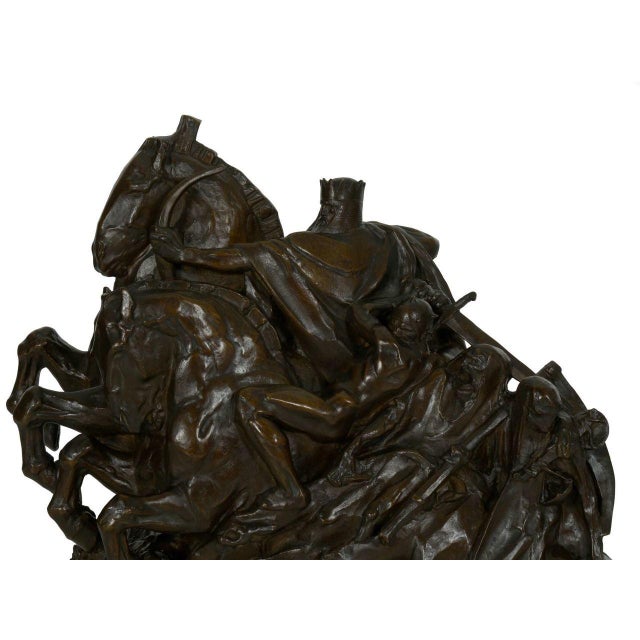 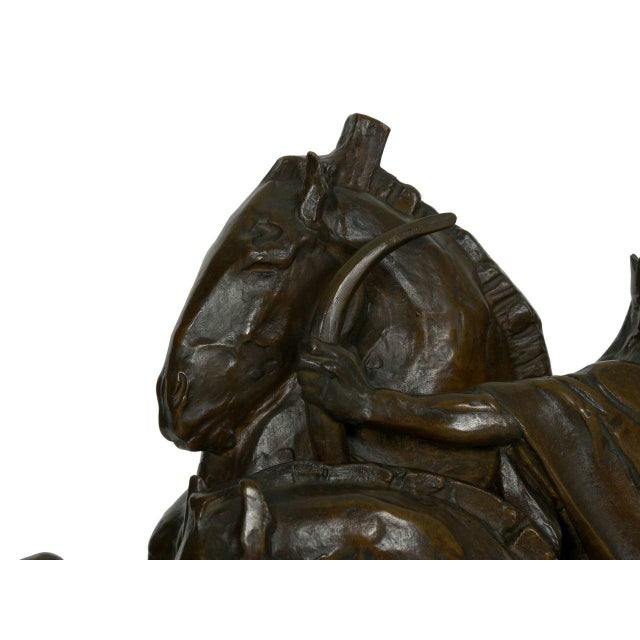 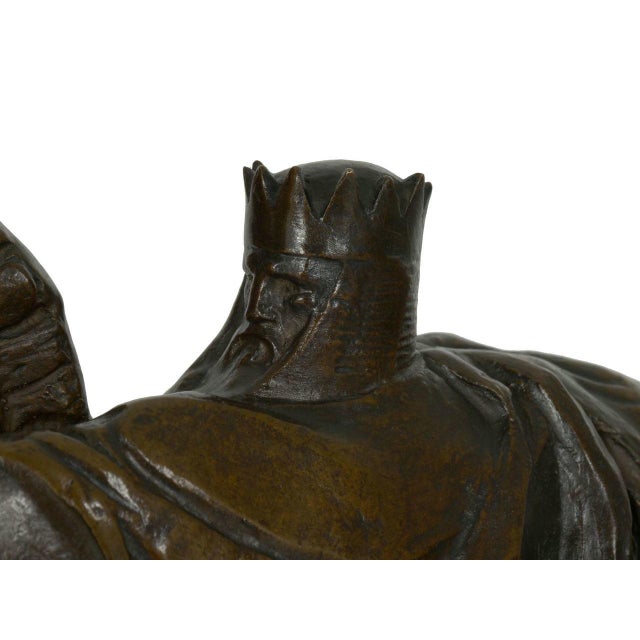 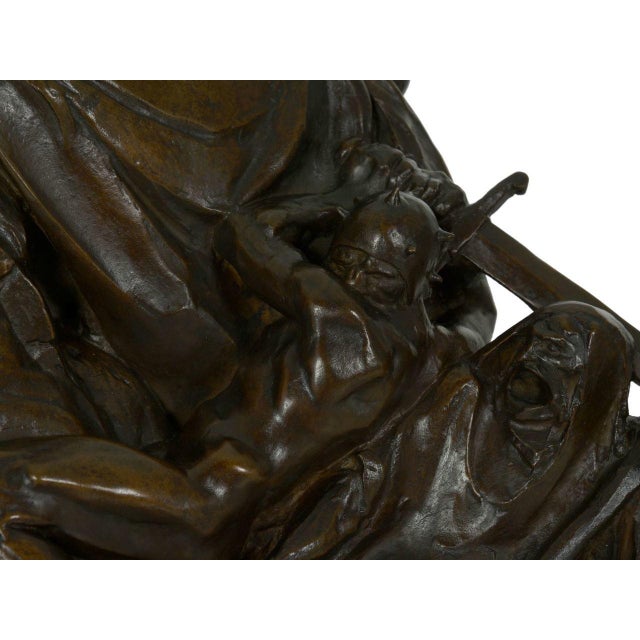 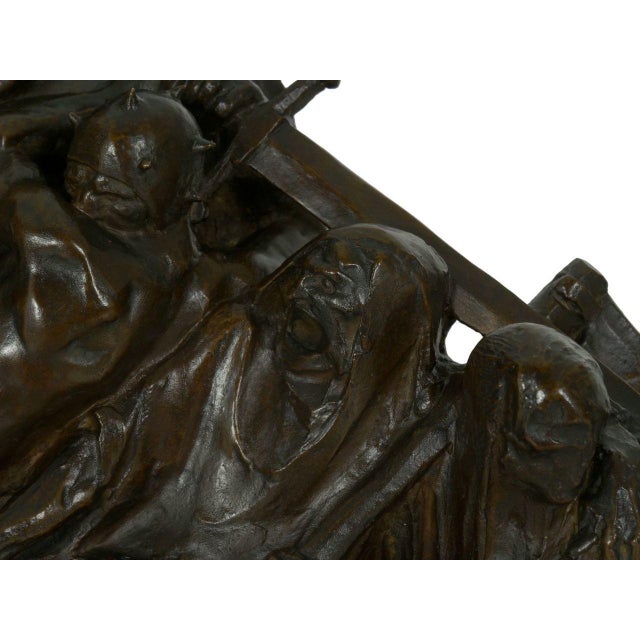 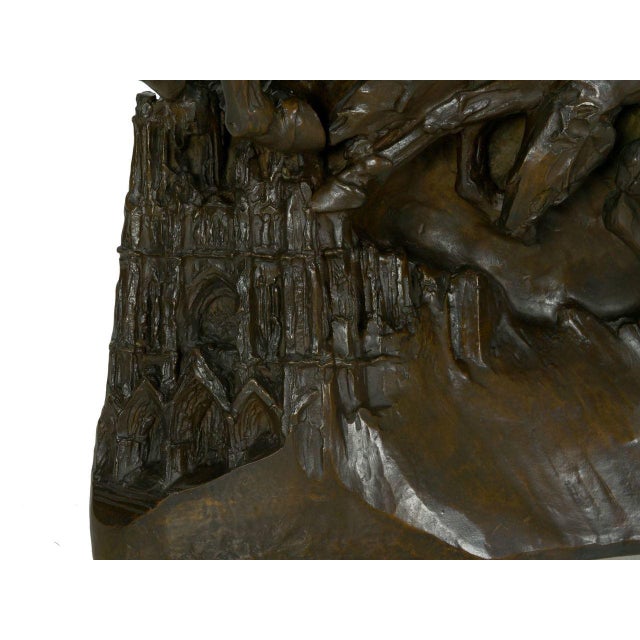 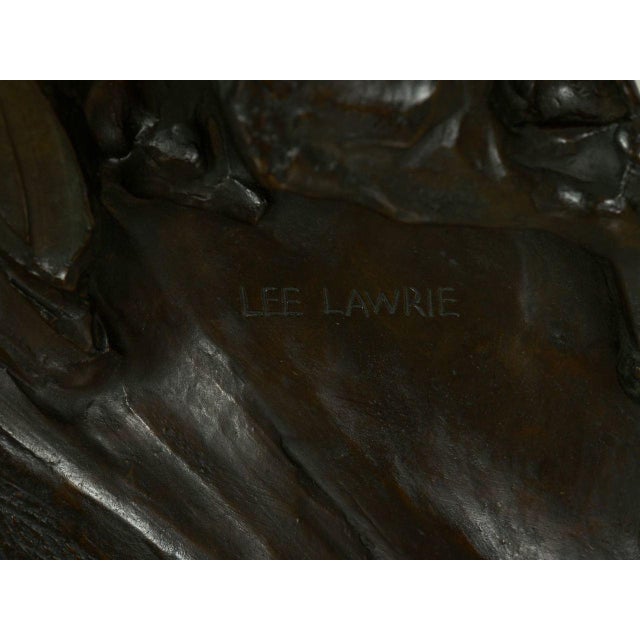 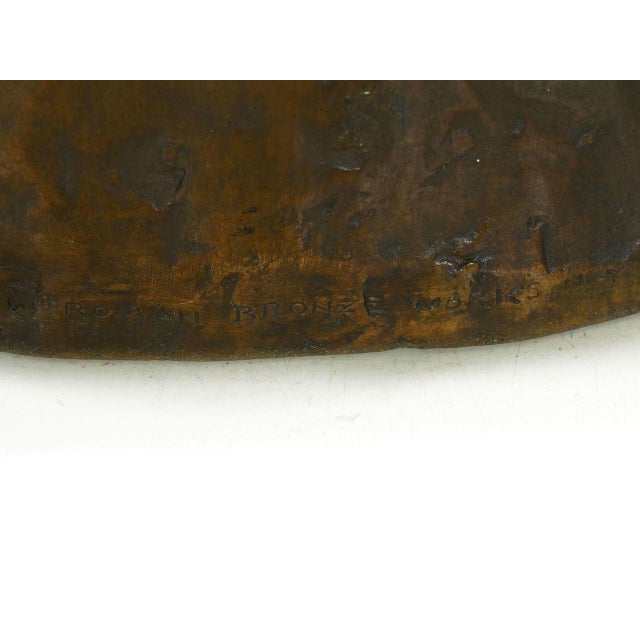 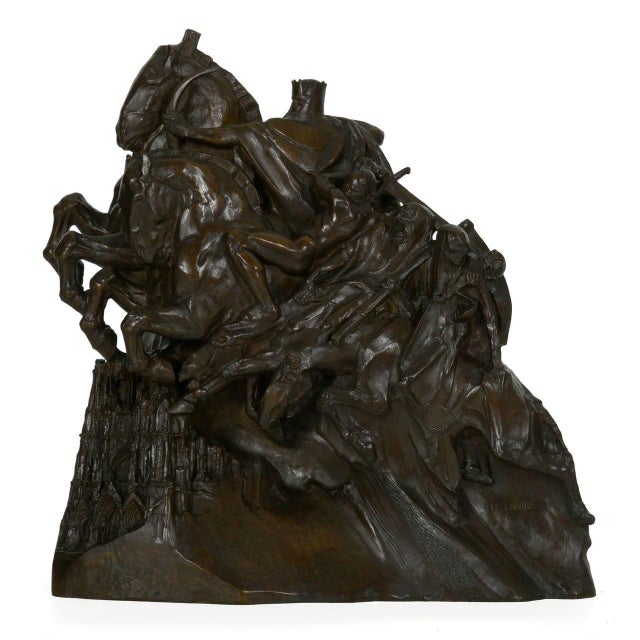 Born in Rixdorf, Germany on October 16th of 1877, Lee Oscar Lawrie came to the United States to live in ... moreBorn in Rixdorf, Germany on October 16th of 1877, Lee Oscar Lawrie came to the United States to live in Chicago at the age of 5. He began working as a sculptor at the early age of 14, serving as an assistant to numerous professional sculptors and ultimately studied under Augustus Saint-Gaudens and Martiny. He would go on to work with some of the most influential architectural sculptors of the 20th century and established himself as a major exponent of Modernism by the late 1920s. His first major commission was the Nebraska State Capitol Building (1922-32) in Lincoln, Nebraska under retainer by architect Bertram G. Goodhue. He became well known for his innovations in flying buttress sculpture for decorative architecture and is perhaps most widely recognized for his monumental public commission of Atlas (1937) that stands prominently before New York City's Rockefeller Center. He was active in mixing architecture with sculpture, often in collaboration with other sculptors and architects; the sheer breadth of his chosen material is admirable, from bas-relief, free-standing statuary, bronze figural work and wooden frescoes. He had a comfort level with the Gothic-style that permeates his work, but his imagination was far-reaching, encompassing the Modernist, the Neoclassical, the Romantic and the Biblical in his subject matter. He would go on to execute numerous public commissions in the full Modernist taste of decoration, including the Church of Heavenly Rest in New York, the National Academy of Sciences in Washington, D.C., the Education Building of Soldiers and Sailors' Memorial Bridge in Harrisburg, Pennsylvania, the Saint Thomas Church of New York and Westpoint Academy. From 1910-12 he served as an instructor in sculpture at Harvard University and was appointed to instructor in the Yale Fine Arts Department where he taught from 1908 through 1918. He was an associate of the National Academy of Design and he served as President of the National Sculpture Society.

His acceptance of Metro's commission is unusual, as he firmly believed art should be accessible to the broader public and not only available for private display; but his fondness for his student, Rex Ingram, coupled with the moving subject matter of the film led him to sculpt the Horsemen.

Metro bought rights to produce a film based on the bestselling novel The Four Horsemen of the Apocalypse by Vincente Blasco Ibanez, a multigenerational antiwar epic. Rex Ingram directed the film and would be dubbed by the press "the sculptor of the screen", paying homage to his background as a sculptor during his studies under Lee Lawrie at Yale. As a ground-breaking success, the film was critically acclaimed and became the highest grossing film of the year at over $ 4 million. Metro commissioned Lee as Rex's former teacher and mentor to sculpt The Four Horsemen of the Apocalypse and to exhibit this work at the premier while using images of the sculpture in the press. The Madison Capital Times Newspaper contemporaneously writes about the sculpture in their June 7th edition of 1922:

"Inspired by the Rex Ingram production of the "Four Horsemen of the Apocalpyse now showing at the Grand, Lee Lawrie, one of the most prominent of American sculptors, recently designed a group statue in bronze of the famous riders of the Apocalypse, as a result of witnessing Metro's picturization of the Ibanez' internationally famous novel... Both director and sculptor have been friends for many years, their acquaintance dating from the time when Mr. Ingram was a pupil of Mr. Lawrie at Yale University where the latter was a teacher of sculpture. Mr. Lawrie's study of The Four Horsemen of the Apocalypse represents the grim horsemen riding madly over the top of a cathedral and each one of the figures, including War, Conquest, Famine and Death, was modeled with gruesome fidelity to the conception of the mythical riders"

The work was cast exclusively by Roman Bronze Works of New York. The work represents Lee Lawrie's golden years of achievement, namely 1920-1935. It is a scarce and fine work. Lawrie's ability to handle the subject is breathtaking, as the figures degenerate gradually from the kingly figure of War through the final Ignominious Death; note also the mounts, each slowly diminishing in strength through the nearly skeletal representation of the final horse as they soar over a Gothic cathedral.

All sales are final 48 hours after delivery, unless otherwise specified.

Located in the historic downtown of Shippensburg, PA, Silla Ltd is a destination for pure, ...

Shop all from this seller