Click follow me to be notified about new products from this shop. You are now following Studio Riga 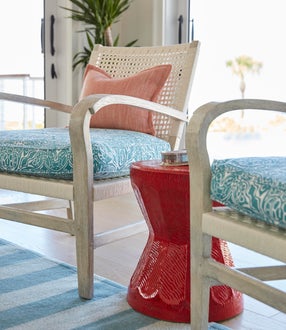 Studio Riga is a Manhattan-based interior design firm led by Jenny Vorhoff. Best known for her ability to create unique spaces that are both graceful and functional, Jenny designs for living. She believes each client’s home should inspire a better-lived life & reflect the client’s point of view. While no two of her homes look alike, Jenny’s portfolio showcases a common thread of unforced elegance, comfortable moments & unique color palettes.

Born and raised in New Orleans, Jenny grew up surrounded by artists, architecture, entrepreneurs, and creators. The inherent beauty & jovial spirit permeating the Big Easy has a strong influence on the homes she designs today.

From New Orleans, Jenny went on to the University of Georgia where she gained her solid base of formal art & design education in the Lamar Dodd School of Art. After graduating with a BFA, she moved to New York City. Working for a top-ranked hospitality design firm, she included some of the world’s most exclusive hotel groups as clients. As a young hospitality designer Jenny fell in love with creating custom pieces for these properties. A desire to work more closely with the artists and craftsman fabricating her visions drove Jenny to launch her own venture in high-end residential design.

In 2006, after Boutique Magazine named her one of the top US “Young Designers to Watch”, Jenny began accepting commissions as a residential designer. She has completed dozens of notable projects ranging from city to country, coast to coast. A Tribeca family home that she designed was recently featured in Lonny Magazine, which praised Jenny’s ability to pair her client’s sophisticated taste with its need for durability and practicality for its young children and pets.

Jenny resides in Tribeca neighborhood of New York City with her husband, their four children and their yellow lab, Rendon. She and her family spend as much time as possible in Amagansett, relaxing outdoors and enjoying the town’s unique combination of beaches and farmland. Her love of all things natural plays an important role in both her family’s life and the homes she designs.