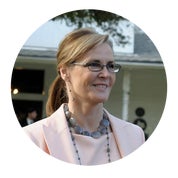 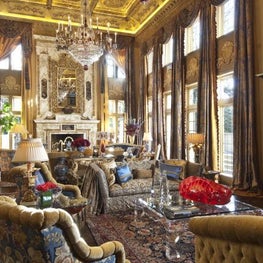 Our clients wanted an elegant setting in which to entertain. A design reminiscent of a grand Italian palazzo was developed. 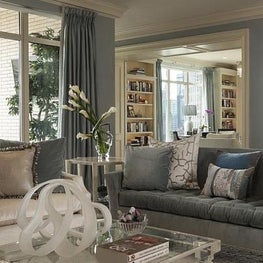 The color palette of creams and frosty blues create subtle shimmer as natural light illuminates the room. The furniture, gathered around the fireplace, is upholstered a combination of cotton, linen, and bamboo, creating a cozy area within the cool room. 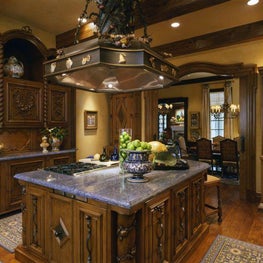 By emphasizing the detail and rich material of cabinets and vent hood; a smallish kitchen feels as impressive as one on a grand scale. 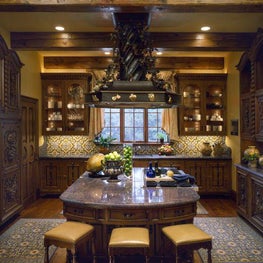 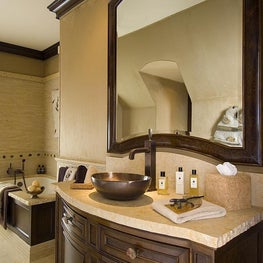 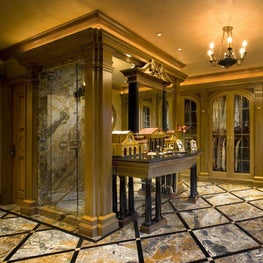 Inspired by the homeowner’s extraordinary collections of art and fine antique furniture, this home also reflects touches of Italy – including the homeowner’s bathroom vanity, modeled after Palladio’s Villa Barbaro. 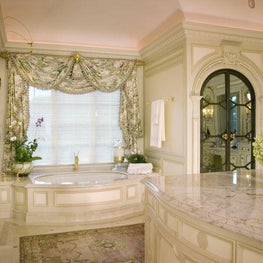 This opulent and ultra-feminine space provides a sumptuous bath for her as well as ample dressing room and office areas. 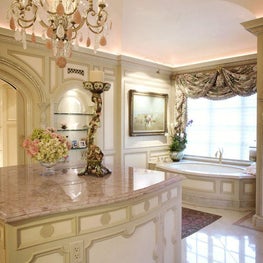 Awash in tones of cream and rose, the room is topped with a ceiling of blush-colored Venetian plaster and decked with a gleaming floor of inlaid rose quartz circles. 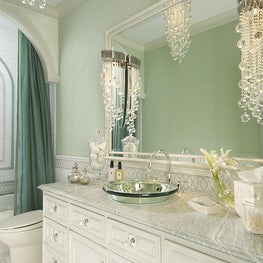 The bathroom shimmers with glass beaded wallpaper, hung above a marble wainscot. The vanity features a mirrored-glass vessel sink and spherical glass knobs backed by mirrored plates. Lighting is sconces and a dramatic ceiling fixture of crystal strands 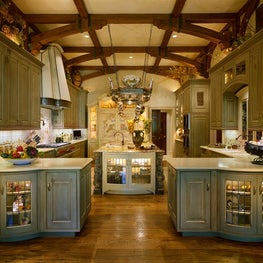 Here is a fully functional and inviting, yet elegant kitchen with significant architectural interest. It is a warm blend of textures, enhanced by special, dramatic details, creating a spacious and user-friendly room. 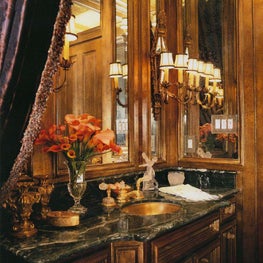 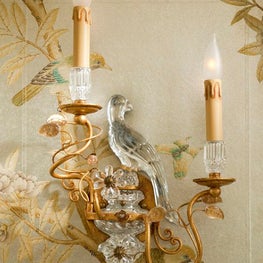 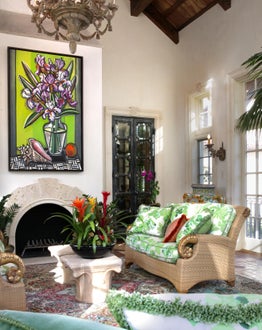 Sherry Hayslip ASID, IIDA attended the Harvard University Graduate School of Design summer programs, and participated in a Bard Graduate Studies in Decorative Arts Program in addition to her undergraduate …

Sherry Hayslip ASID, IIDA attended the Harvard University Graduate School of Design summer programs, and participated in a Bard Graduate Studies in Decorative Arts Program in addition to her undergraduate and post-baccalaureate studies and Centenary College and Southern Methodist University.

Along with her husband, architect Cole Smith, FAIA, Sherry co-founded the Dallas Symposium of Decorative Arts & Architecture. The Symposium was held for seven years in conjunction with the Dallas Museum of Art, and brought scholars from Europe and the United States to lecture for each three-day event. In 2009, the 20th anniversary of the Symposium was celebrated with a one-day lecture featuring two of the original speakers.

Sherry, or her work, has been featured in many publications and she has made numerous television appearances. Her projects have received national and international recognition, including honors at the 2010 International Design & Architecture Awards, the 2008 Subzero Wolf Kitchen Design Awards, as well as multiple awards from the American Society of Interior Designers. Additionally, Sherry was named one Designer of Honor: Texas by The American Antiques Show and The American Folk Art Museum, at their premiere “Best of America” event in January 2010 and Designer of the Year at the International Design Guild Annual Designer Showcase Awards in 2007. Sherry is consistently named one of the Best Designers in Dallas by D Home magazine and has been featured in The Andrew Martin International Interior Design Review.

Sherry is involved with several professional organizations including the American Society of Interior Design, the International Interior Design Association, the Texas Association for Interior Design, and the National Council of Interior Design Qualification. Additionally, she is a member of the Design Leadership Summit, the Design Trust, and The Leaders of Design Council, all highly regarded and exclusive organizations aimed at continuing education for design firm principals. She invests her philanthropic efforts in supporting the fine and performing arts. She is a trustee and patron of the Dallas Opera, the Dallas Symphony Orchestra, and the Dallas Museum of Art in addition to having served as a board member of the Dallas Bach Society. In 2004 she served as the chairperson for the Silver Supper, a fund-raising event benefiting the Decorative Arts Fund at the Dallas Museum of Art. She is an active member and former program chairperson of the Dallas Glass Club, one of the longest running private decorative arts societies in Dallas. She also enjoys traveling, writing her blog, and speaking on design and the decorative arts.