Click follow me to be notified about new products from this shop. You are now following Scott Sanders 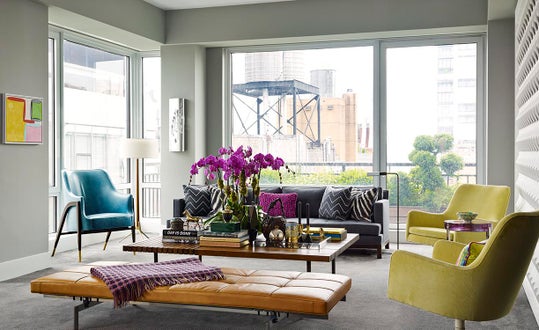 Founded in 2000, Scott Sanders is a full service New York  City and Hamptons-based interior design firm, specializing in  distinctive residential and commercial interiors that epitomize his signature “New American Style.” Principal, Scott Sanders, began his career at Ralph Lauren Home, creating their in-house Interior Design Department, and as lead designer working on residences from California to Paris. His highly acclaimed renovation of the Beach House Bal Harbour Hotel for the Rubell family in Miami Beach, during his last year with Ralph Lauren, was a driving force in establishing Scott Sanders.

Over the years he has developed the New American Style for which he is known, a perfect blend of his all-American roots and the inspiration he takes from his extensive travels around the world. Central to Sanders’ design philosophy is that the new American family lives expressively with their art, their work and passions, and they must be both comforted by classics and stimulated by contemporary flexible spaces.

Published in Fall 2014 by Pointed Leaf Press,'The Insider Guide to the Lord Baltimore Hotel and Baltimore, Too', is the story of Sanders' collaboration with the Rubells for the re-imagining of the Lord Baltimore Hotel. In 2010, Pointed Leaf Press published "Picture Perfect: Designing the New American Family Home," an innovative book that documents Sanders' inspired youth, his accomplished career, and a step-by-step behind the scenes look at Sanders' process while designing the perfect new American family home.