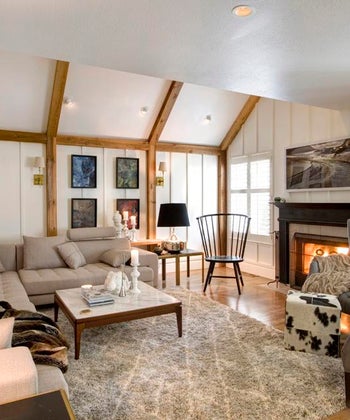 ST. HELENA, Calif. – Interior designer Scott Corridan doesn’t just flip real estate, he takes a dwelling and puts it through a complete metamorphosis. His most recent project, a turn key fully furnished St. Helena townhome, brought in a record price of $925,000 after being listed on the market for just two weeks. While the desirable location, just two blocks off Main Street, played a part in the quick sale, it was Corridan’s impeccable style that was the true allure. Corridan is the go-to interior and event designer for those seeking to infuse beauty, elegance and sophistication into affluent everyday life and special occasions. The home was purchased in foreclosure in 2014 for $456,000. Corridan transformed the home, capturing the essence of a historic Napa Valley farmhouse. Interior doors were replaced with ranch style and classic barn doors; the kitchen and dining area were completely revitalized with a marble countertop fit for six, chef accouterments and side-by-side wine refrigerators; and bathrooms were upgraded, brightened and furnished with dual rainfall showerheads. The MLS sale price was $800,000, however the included furnishings and décor brought the final price to $925,000. Furnishings included a barn wood dining table with dusk blue upholstered chairs; a flowing conglomeration of chairs and sofas; faux fur throws; pillows in natural tones; and carefully selected artwork and sculptures. “This home sale is a prime example of how well thought out staging with high-end furnishings can make all the difference in getting top dollar for a property listing,” said Corridan. “I enjoyed unlimited expression and an open-ended timeline. I was super pleased with the outcome.”

INCLINE VILLAGE, Nev. – Kitchen + Bath Business Magazine selected Tahoe designer Scott Corridan as one of their judges for their prestigious Design Awards. After impressing the judges in last year’s Design Awards, Scott was selected as a judge for his experience in the industry. Corridan and his fellow judges were charged with reviewing more than 130 submissions for this year’s decision. “I’m very flattered – it’s a high honor and an endorsement of the work we’re doing,” Corridan said. “And it comes with careful responsibility.” The awards, now in their 18th year, select the best kitchen, bathroom and showroom projects in the industry, judged on fulfilling clients’ requirements, solving design challenges and incorporating innovative thinking in the form of aesthetics, function, product usage and technology, according to Kitchen & Bath Business Magazine. “I like to choose judges who have experience in the industry and those who I know will be engaged and involved,” said Chelsie Butler, executive editor of the magazine. The awards were published in the September 2016 issue, and featured Brandy Souza, Troy Pavelka and Sheryl Steinberg along with Corridan as judges. “There are some great designers doing great work out there, it is very inspiring!” Corridan said. “It’s jaw-dropping to view and judge truly exceptional work that make you look at these projects in a whole new way.” For more information about Scott Corridan Design, go to www.scottcorridan.net. To learn more about the Kitchen + Bath Business Magazine’s design awards, go to http://www.kbbonline.com/news/awards-events/announcing-winners-kbbs-2016-design-awards/ About Scott Corridan Design: Scott Corridan is a nationally recognized event planner and interior designer offering a skill-set for design, staging, collection consulting and more. His work has brought him recognition from the likes of HGTV, Martha Stewart, ABC’s Extreme Makeover, The Fine Living Channel, and Access Hollywood.