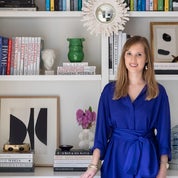 Click follow me to be notified about new products from this shop. You are now following Paloma Contreras Design

Paloma Contreras is an award-winning interior designer, tastemaker, and design influencer based in Houston, Texas. Paloma’s design sensibility is a modern take on traditional style– gravitating towards classic silhouettes and timeless pieces paired with a touch of glamour and an infusion of color. Paloma has honed her distinct eye for style through a decade in the design industry and a lifetime of appreciating beauty in all of its various forms. She has developed a reputation for designing beautiful interiors in a broad range of styles which are executed in a manner that is polished, refined, and effortless.
Paloma has been repeatedly named to the prestigious ELLE Decor “A-List” of the top interior designers in the world. She has also been recognized as a “Next Wave” interior designer by House Beautiful and has been named to LUXE Magazine’s “Gold List”. In 2017, Paloma was named #4 on the Forbes list of the Top Social Media Influencers in the Home category and is one of the Top 10 Instagram accounts to follow for interior design according to ELLE Decor. Paloma and her work have been featured in numerous publications and websites including ELLE Decor, Architectural Digest, House Beautiful, Vogue, Domino, Luxe, Traditional Home, Southern Living, The New York Times, The Washington Post, and the Wall Street Journal. In addition, Paloma recently debuted a licensed collection with Williams Sonoma Home and has also worked on special projects with top brands such as One Kings Lane, Bravo Television, American Express, Kitchen Aid, Nest, Kohler, Auberge du Soleil, and Peninsula Hotels. Paloma’s first book, Dream Design Live was published by Abrams in September 2018. In her free time, Paloma enjoys traveling with her husband, Fabian and spending time with their sweet dog, Tate.