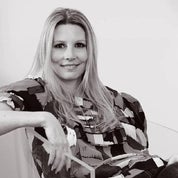 Click follow me to be notified about new products from this shop. You are now following Huntley & Co. Interior Design

Tricia Huntley is the founder and creative director of Huntley & Co. Interior Design. Established in 2006, Huntley & Co.’s past and present projects include residences throughout the United States as well as in Switzerland and London. Her signature style – a contrast of warmth and restraint – has been described as “a glamorous sensibility, edited for a clean finish.”

Ms. Huntley received her Master of Arts in Interior Design from George Washington University and spent her formative years in hotel design and under the tutelage of Solis Betancourt. She cultivated her earliest skills, however, during her childhood in Minneapolis. Growing up in a household with three rambunctious brothers, she learned to create stylish and organized spaces at a very young age. Her Midwestern roots combined with her classical training led to her love of paradox. Playing up the tension in adjacencies – modern/traditional, sexy/understated – is a signature of all Huntley & Co. interiors.