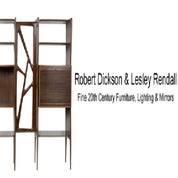 Are you looking for something specific?

Robert Dickson and Lesley Rendall, both members of the BADA (British Antique Dealers Association) have been dealing in antiques in the Fulham Road, Chelsea, London SW3 for thirty and twenty years respectively, and have now closed the shop there at the end of the last lease, and have relocated to 5 High Street Petworth, West Sussex GU28 OAU under the shop heading of Dickson Rendall.
​
The stock is largely 20th century, mixed with selected items from the 18th and 19th centuries and also encompassing carefully chosen contemporary paintings and objects of style.
​