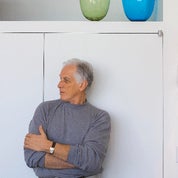 Click follow me to be notified about new products from this shop. You are now following Charles Spada Interiors

Charles Spada Interiors was established in 1980, after leaving a successful career as a designer of women’s apparel in New York City and Boston. His trademark style is the use of a well-edited color palette, fabrics that play with texture, exposed stone and wood floors.

Charles has achieved House Beautiful magazine’s “Ten Most Beautiful Showhouse Rooms” award and was voted by House Beautiful as one of their “101 Favorite Designers.” He was also awarded Traditional Home magazine’s “Outstanding Designer” award. He recently received a Citation for Adaptive Reuse and new Construction by The Boston Society of Architects for his work on Channel Center. Additionally Charles was inducted into the New England Home Hall of Fame in 2007.

His work has appeared in Elle Décor, House Beautiful, Traditional Home, and Veranda magazine as well as Boston Magazine, Design New England, New England Home Magazine and Interior Design and Architectural Digest Italy. Other projects have been featured in the New York Times, the Palm Beach Post, Boca Raton Magazine, The Boston Globe and The Boston Herald. Several of his projects have been featured in the Turkish magazine Antik and Dekor, and the HGTV cable network program, “The Best of American Design” and “This Old House.” His work also appears in numerous interior design books such as East Coast Rooms from Rockport Publishers and Spectacular Homes of New England from Panache (for which he also wrote the introduction).