Click follow me to be notified about new products from this shop. You are now following Cecilie Starin Design 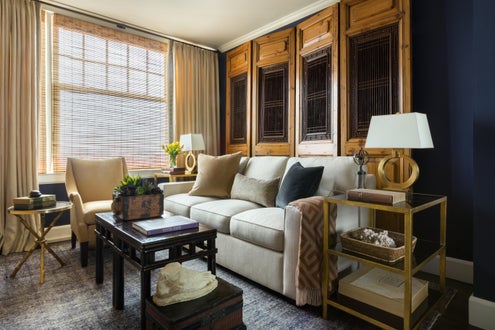 Cecilie brings the eye of a painter to her projects. For her, every room is a still life. She combines elements that create a look that is refined yet fresh; the studied timelessness of comfortable modern classicism.

Cecilie Starin trained to be a fine art painter at the University of California at Davis under revered California artists Wayne Thiebaud, Bob Arneson, William Wiley, Roy De Forest and Manuel Neri. She received her BFA from Art Center College of Design in Pasadena where she studied graphic design and illustration. Later she attended the University of California at Berkeley Interior Design Program and focused her study on architecture and antiques.

For nearly twenty years, Cecilie was a clothing designer for Smith & Hawken, Levi Strauss & Co. and The Lee Company where she led design teams that conceived and developed apparel, textiles, custom colors and fabric finishes. Cecilie’s work as a fashion designer took her to New York, Paris, London, Florence, Rome, Milan and to the Far East where she identified and analyzed emerging trends in design, shape and color.

Cecilie brings her extensive training in fine arts, decorative arts and fashion design to each of her interior design projects. Cecilie’s love of architecture and applied design inspires her to seek an eclectic mix; a global style of comfortable modern classicism. She combines objects and furniture from Italy, France, England, the near and Far East including natural, industrial and mid-century elements. She juxtaposes classic with contemporary, primitive and the exotic; industrial with refined and East with West. She develops interest through shape, proportion and texture.

Cecilie’s work has been featured in Traditional Home Magazine, Paper City, Luxe Magazine and the San Francisco Chronicle. She was selected to participate in the San Francisco Decorator Showcase in 2006, 2008, 2009, 2010 and 2015 as well as Elle Décor‘s Dining by Design in 2005. Cecilie is the owner of Cecilie Starin Design Inc., a full-service interior design firm, whose projects are primarily high-end residential in San Francisco, Marin County, Napa, and the Peninsula.