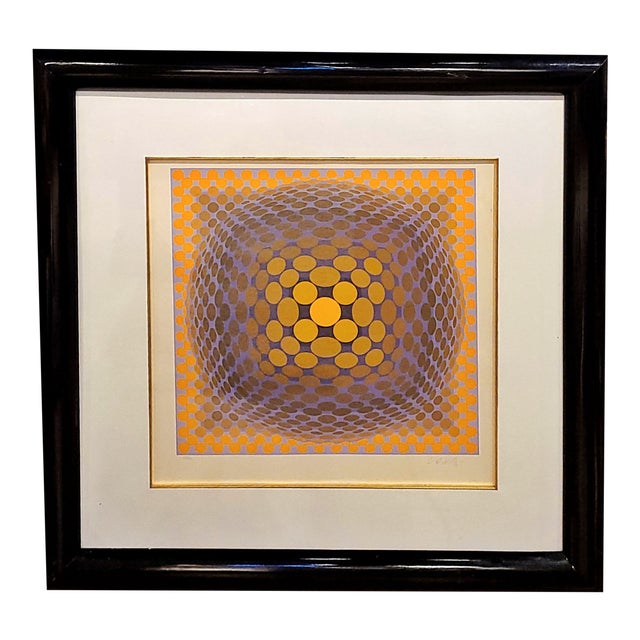 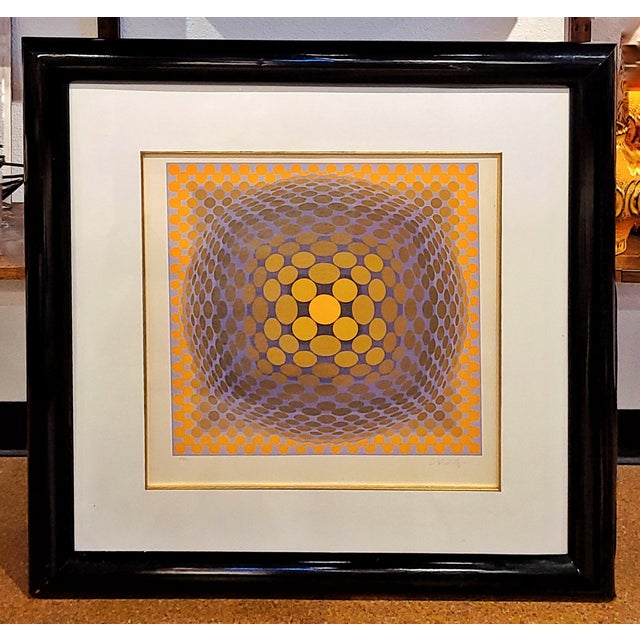 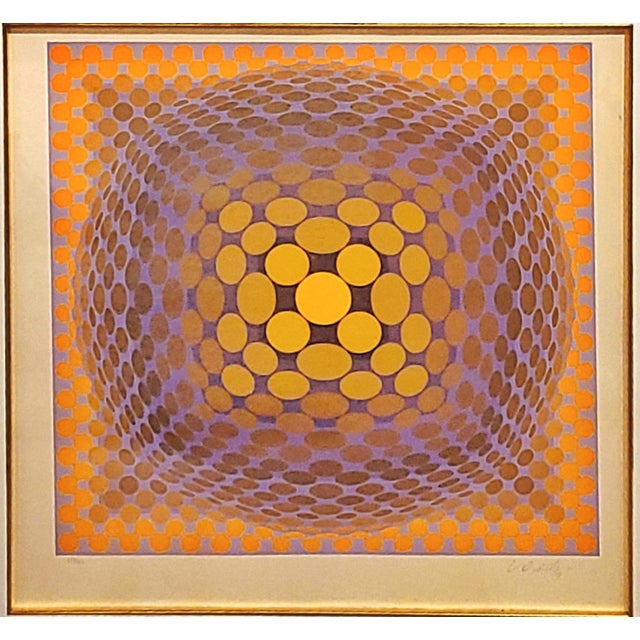 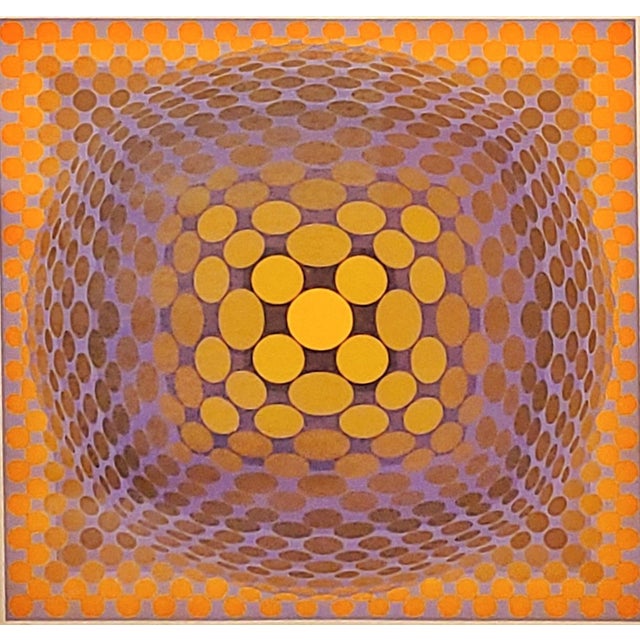 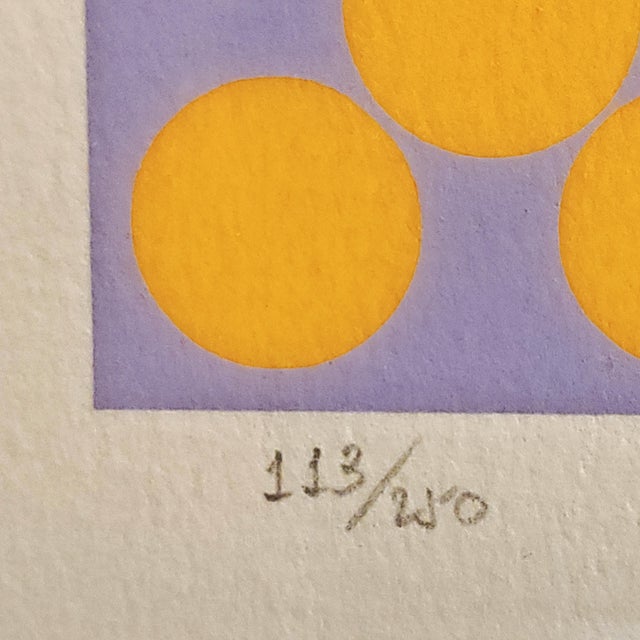 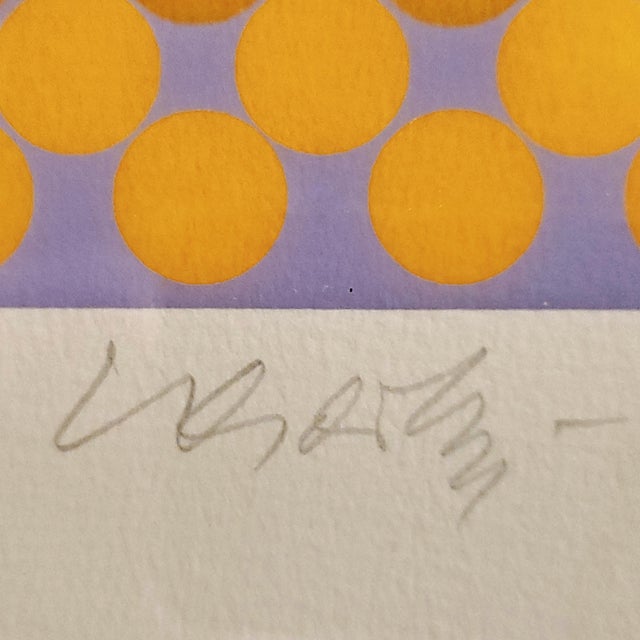 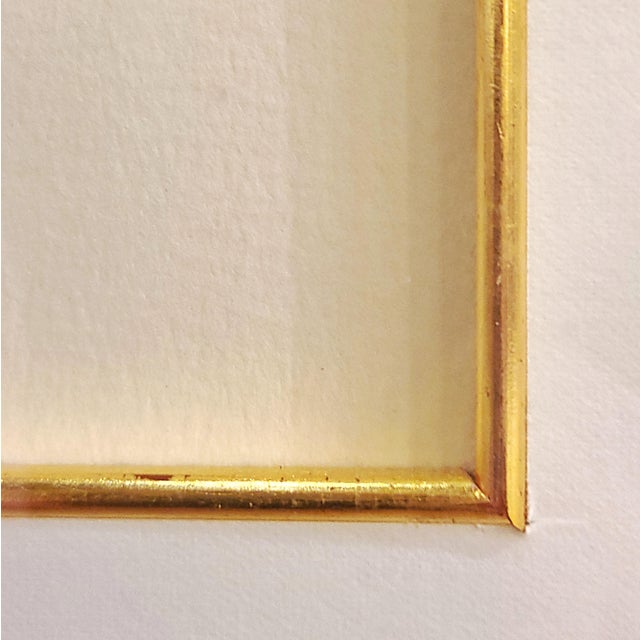 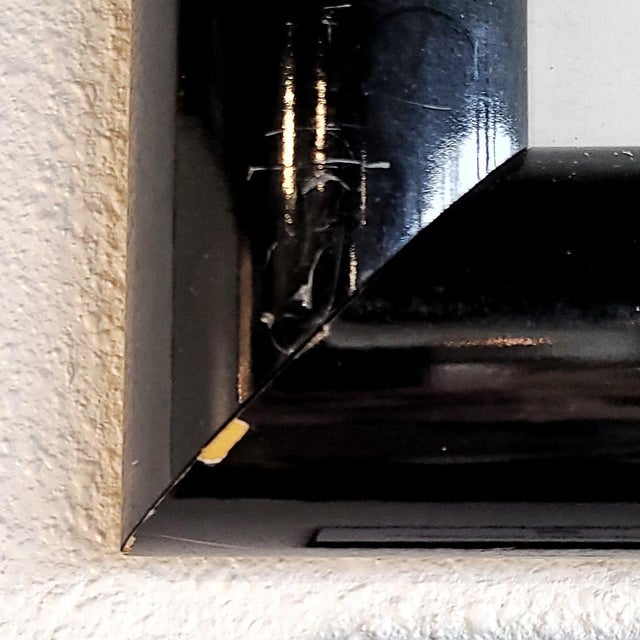 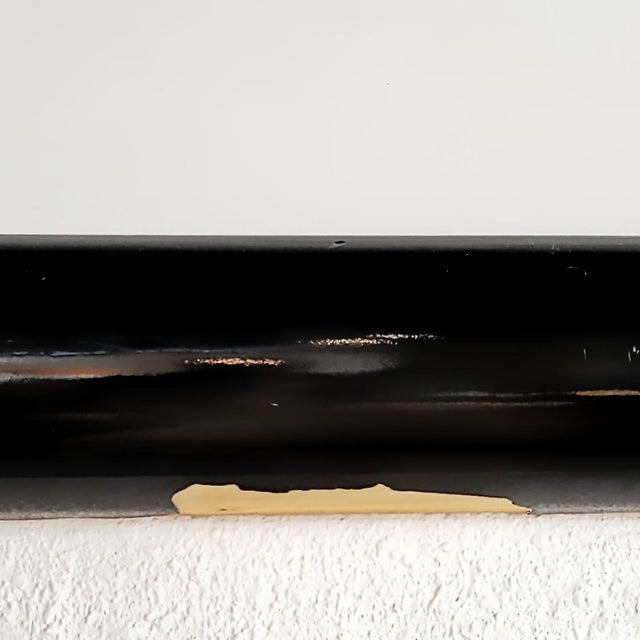 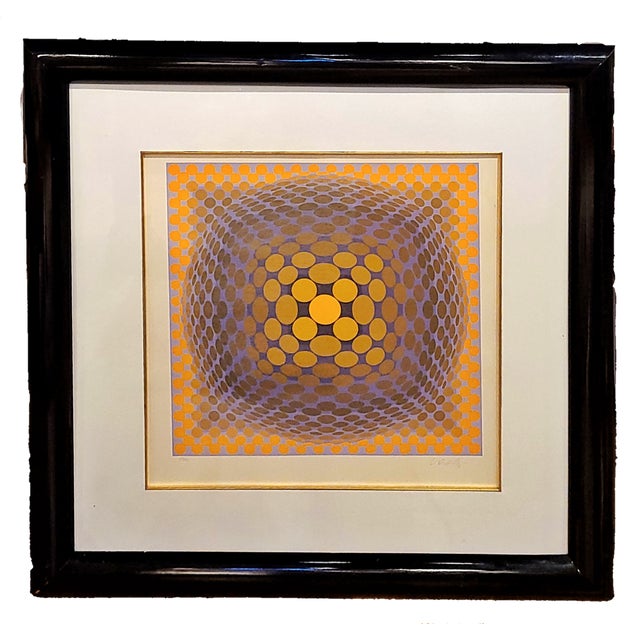 VICTOR VASARELY (HUNGARY, 1906–97) was an acknowledged leader of the Op-Art movement, and his innovations in color and optical illusion have had a strong influence on many modern artists. The French-Hungarian painter created eye-popping geometric abstractions that play with the viewer’s perception of depth, perspective, and motion. A classic example is the 1937 Zebra, which consists of undulating black and white stripes that suggest the form of the titular animal through optical trickery. The work is often credited as the earliest Op-Art painting.

Such illusions were more than pleasing tricks for Vasarely, who insisted that “pure form and pure color can signify the world.” He wanted to “democratize” art by producing works in large editions at reasonable prices that were understandable across national and cultural boundaries. In the 1960s, he developed his alphabet plastique, or fine art alphabet, consisting of elementary visual building blocks that could be used in endless combinations to create original compositions. By employing this universal visual vocabulary and stripping away topical references, he sought to create what he called a “Planetary Folklore.” Embodying Vasarely’s singular belief that art should serve a social function, accessible to all, these innovations may perhaps be his greatest contribution to 20th-century art.

Vasarely was born in Pécs and grew up in Pöstyén (now Piešťany, Slovakia) and Budapest, where, in 1925, he took up medical studies at Eötvös Loránd University. In 1927, he abandoned medicine to learn traditional academic painting at the private Podolini-Volkmann Academy. In 1928/1929, he enrolled at Sándor Bortnyik's private art school called Műhely (lit. "Workshop", in existence until 1938), then widely recognized as Budapest's center of Bauhaus studies. Cash-strapped, the műhely could not offer all that the Bauhaus offered. Instead, it concentrated on applied graphic art and typographical design. While at the Academy, he became familiar with the contemporary research in color and optics by Johannes Itten, Josef Albers, and the Constructivists Malevich and Kandinsky.

In 1929, he painted his Blue Study and Green Study. In 1930, he married his fellow student Claire Spinner (1908–1990), and together they had two sons, Andre and Jean-Pierre. Jean-Pierre was also an artist and used the professional name 'Yvaral'. In Budapest, he worked for a ball-bearings company in accounting and designing advertising posters. Vasarely became a graphic designer and a poster artist during the 1930s combining patterns and organic images with each other.

After his first one-man show in 1930, at the Kovacs Akos Gallery in Budapest, Vasarely moved to Paris. For the next thirteen years, he devoted himself to graphic studies. His lifelong fascination with linear patterning led him to draw figurative and abstract patterned subjects, such as his series of harlequins, checkers, tigers, and zebras. During this period, Vasarely also created multi-dimensional works of art by super-imposing patterned layers on one another to attain the illusion of depth. In 1943, Vasarely began to work extensively in oils, creating both abstract and figurative canvases. His first Parisian exhibition was the following year at the Galerie Denise Rene that he helped found. Vasarely became the recognized leader of the avant-garde group of artists affiliated with the gallery. He worked as a graphic artist and as a creative consultant at the advertising agencies Havas, Draeger, and Devambez (1930–1935). His interactions with other artists during this time were limited. He thought of opening an institution modeled after Sándor Bortnyik's műhely and developed some teaching material for it. Having lived mostly in cheap hotels, he settled in 1942/1944 in Saint-Céré in the Lot département. After the Second World War, he opened an atelier in Arcueil, a suburb about 10 kilometers from the center of Paris (in the Val-de-Marne département of the Île-de-France). It was here that in 1947, Vasarely discovered his place in abstract art. He concluded that "internal geometry" could be seen below the surface of the entire world. He conceived that form and color are inseparable. "Every form is a base for color, every color is the attribute of a form." Forms from nature were thus transposed into purely abstract elements in his paintings. In 1961, he finally settled in Annet-sur-Marne (in the Seine-et-Marne département).

Vasarely eventually went on to produce art and sculpture using optical illusion. Over the next three decades, Vasarely developed his style of geometric abstract art, working in various materials but using a minimal number of forms and colors:


1929–1944: Early graphics: Vasarely experimented with textural effects, perspective, shadow, and light. His early graphic period resulted in works such as Zebras (1937), Chess Board (1935), and Girl-power (1934).
1944–1947: Les Fausses Routes – On the wrong track: During this period, Vasarely experimented with cubistic, futuristic, expressionistic, symbolistic, and surrealistic paintings without developing a unique style. Afterward, he said he was on the wrong track. He exhibited his works in the gallery of Denise René (1946) and the gallery René Breteau (1947). Writing the introduction to the catalog, Jacques Prévert placed Vasarely among the surrealists. Prévert creates the term imaginaries (images + noir, black) to describe the paintings. Self Portrait (1941) and The Blind Man (1946) are associated with this period.
1947–1951: Developing geometric abstract art (optical art): Finally, Vasarely found his own style. The overlapping developments are named after their geographical heritage. Denfert refers to the works influenced by the white tiled walls of the Paris Denfert - Rochereau metro station. Ellipsoid pebbles and shells found during a vacation in 1947 at the Breton coast at Belle île inspired him to the Belles-Isles works. Since 1948, Vasarely usually spent his summer months in Gordes in Provence-Alpes-Côte d'Azur. There, the cubic houses led him to the composition of the group of works labeled Gordes/Cristal. He worked on the problem of empty and filled spaces on a flat surface as well as the stereoscopic view.
1951–1955: Kinetic images, black-white photographies: From his Gordes works he developed his kinematic images, superimposed Acrylic glass panes create dynamic, moving impressions depending on the viewpoint. In the black-white period, he combined the frames into a single pane by transposing photographies in two colors. Tribute to Malevitch, a ceramic wall picture of 100 m2 (1,100 sq ft) adorns the University of Caracas, Venezuela which he co-designed in 1954 with the architect Carlos Raùl Villanueva, is a major work of this period. Kinetic art flourished and works by Vasarely, Calder, Duchamp, Man Ray, Soto, and Tinguely were exhibited at the Denise Réne gallery under the title Le Mouvement (the motion). Vasarely published his Yellow Manifest. Building on the research of constructivist and Bauhaus pioneers, he postulated that visual kinetics (plastique cinétique) relied on the perception of the viewer who is considered the sole creator, playing with optical illusions.
1955–1965: Folklore planétaire, permutations, and serial art: On 2 March 1959, Vasarely patented his method of unités plastiques. Permutations of geometric forms are cut out of a colored square and rearranged. He worked with a strictly defined palette of colors and forms (three reds, three greens, three blues, two violets, two yellows, black, white, gray; three circles, two squares, two rhomboids, two long rectangles, one triangle, two dissected circles, six ellipses) which he later enlarged and numbered. Out of this plastic alphabet, he started serial art, an endless permutation of forms and colors worked out by his assistants. (The creative process is produced by standardized tools and impersonal actors which questions the uniqueness of a work of art.) In 1963, Vasarely presented his palette to the public under the name of Folklore planetaire.
1965–: Hommage à l'hexagone, Vega: The Tribute to the hexagon series consists of endless transformations of indentations and relief adding color variations, creating a perpetual mobile of optical illusion. In 1965 Vasarely was included in the Museum of Modern Art exhibition The Responsive Eye, created under the direction of William C. Seitz. His Vega series plays with spherical swelling grids creating an optical illusion of volume.

In October 1967, designer Will Burtin invited Vasarely to make a presentation to Burtin's Vision '67 conference, held at New York University. On 5 June 1970, Vasarely opened his first dedicated museum with over 500 works in a renaissance palace in Gordes (closed in 1996). A second major undertaking was the Foundation Vasarely in Aix-en-Provence, a museum housed in a distinct structure specially designed by Vasarely. It was inaugurated in 1976 by French president Georges Pompidou, two years after his death. Sadly the museum is now in a state of disrepair, several of the pieces on display have been damaged by water leaking from the ceiling. Also, in 1976 his large kinematic object Georges Pompidou was installed in the Centre Pompidou in Paris and the Vasarely Museum located at his birthplace in Pécs, Hungary, was established with a large donation of works by Vasarely. In the same decade, he took a stab at industrial design with a 500-piece run of the upscale Suomi tableware by Timo Sarpaneva, which Vasarely decorated for the German Rosenthal porcelain maker's Studio Linie. In 1982, 154 specially created serigraphs were taken into space by the cosmonaut Jean-Loup Chrétien on board the French-Soviet spacecraft Salyut 7 and later sold for the benefit of UNESCO. In 1987, the second Hungarian Vasarely museum was established in Zichy Palace in Budapest with more than 400 works.